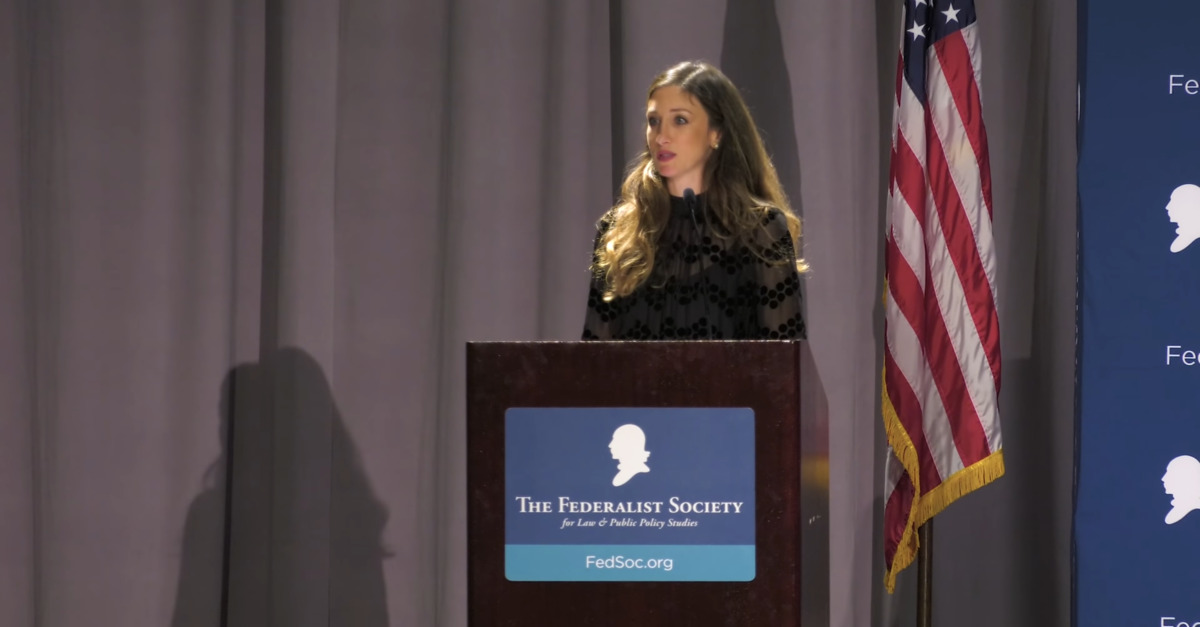 In a Wednesday announcement, President Donald Trump nominated an elite attorney who appears to have worked in private practice for less than a year to a lifetime position on the federal bench.

Kathryn Kimball Mizelle was named as the 45th president’s choice to serve on the U.S. District Court for the Middle District of Florida. Certain aspects of the nominee’s résumé read like a wish list for the Federalist Society and the broader conservative movement. In one odd incident, Trump’s latest judicial nominee told a conservative crowd that she believes “paper money” is unconstitutional.

Mizelle, apparently in her early thirties, currently has a presumably high-paying job at the Jones Day law firm. According to her company profile, Mizelle’s nascent law practice “focuses on complex civil and criminal litigation and appeals.”

Her law firm’s biography suggests she began her legal career as a law clerk from 2012 to 2013 for Judge James S. Moody Jr., of the federal district court she’s been nominated to join. She then worked for William Pryor, the chief judge of the U.S. Court of Appeals for the Eleventh Circuit, from 2013 to 2014. (Pryor garnered national attention in 2003 when he called for the removal of then-Alabama Chief Justice Roy Moore over the latter’s violation of a court order demanding he remove a sculpture of the Ten Commandments from the Alabama Judicial Building.)

From 2014 to 2018, the biography says Mizelle served in a number of roles with the U.S. Department of Justice, including in the Eastern District of Virginia from 2014 to 2015.

She went on to clerk for Judge Gregory G. Katsas, a Trump appointee, on the U.S. Court of Appeals for the D.C. Circuit in 2018. From there, she clerked for U.S. Supreme Court Justice Clarence Thomas. Mizelle’s relationship with Thomas seems to have strengthened over the years since she helped author his opinions. In January 2020, Mizelle co-taught “Religion Clauses of the First Amendment” with Thomas at the University of Florida where she serves as an adjunct professor.

“I have to describe what it’s like to clerk for the greatest living American,” Mizelle said of Thomas. “And I mean that with all sincerity.”

“It goes without saying that to join the Thomas clerk family is quite intimidating,” she continued. “You’re inheriting a torch that’s been carried for 30 years by legal giants in their own right–including Judge Katsas–and you, more than anything else, want to honor the justice by defending the constitution. Thomas clerks see it as an act of patriotism. It’s your one year to serve your country and you do so without sleep happily for that year.”

Mizelle went on to distinguish Thomas from the other justices:

In particular, I think there are two virtues that set Justice Thomas apart. First, it’s his courage: Justice Thomas has taken the commitment to originalism to new heights. Justice [Antonin] Scalia once called him a “bloodthirsty originalist,” which maybe wasn’t meant as a compliment but I really think it is one. Justice Thomas lives out his principles regardless of the outcome and he has the courage to say the unpopular–even if he’s the only one saying it. Second, and I think is most unique, is joy. Justice Thomas does his job with an infectious joy–as anyone who has heard him laugh knows. And because he has so much joy, I loved going to work.

“Clerking for Justice Thomas meant that I got to know a man for whom I have the greatest respect both as a person and as a jurist and who has given me a model for how to live out the virtues of courage and joy,” Mizelle’s paean concluded.

Mizelle’s husband is Chad Mizelle, who currently works in the Trump administration. Eyebrows were raised in February when he was installed in a senior legal role. Critics immediately said that the General Counsel for the Department of Homeland Security position should be filled by someone with much more experience.