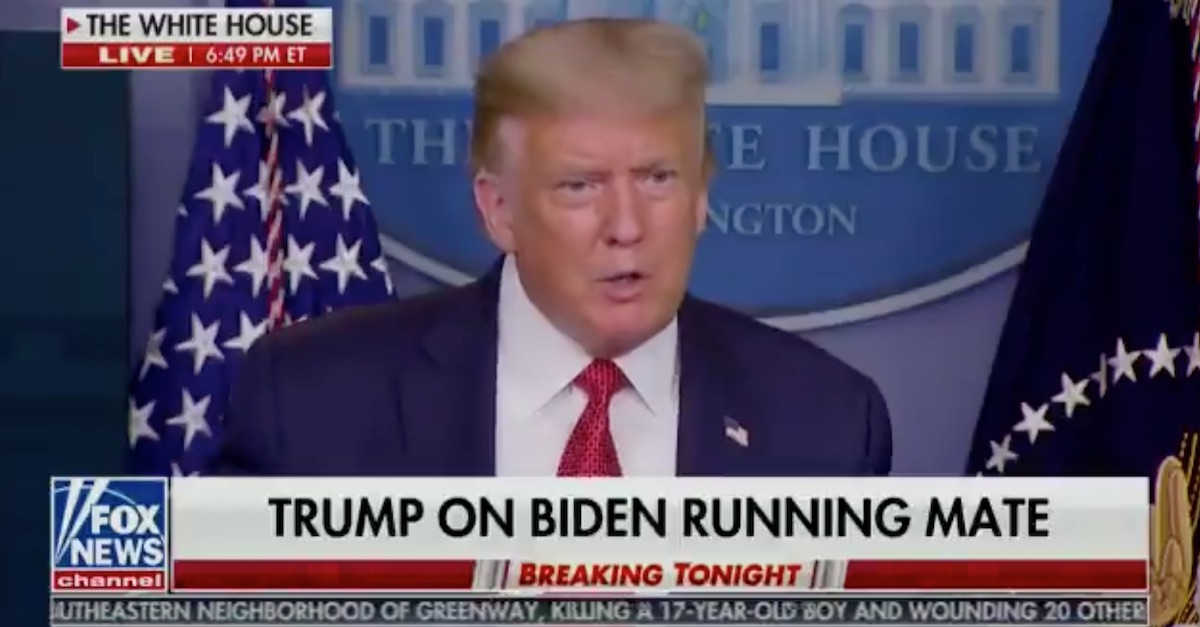 It wasn’t the first and it probably won’t be the last time the 45th president of the United States accused a political opponent of committing a crime punishable by death. President Donald Trump, during a White House briefing on Monday evening, said that Obama campaign (sic)—”caught” spying on the Trump campaign—”probably” committed treason.

Chanel Rion of right-wing cable news network One America News (OAN) began her question by saying that many of the president’s supporters “feel” former President Barack Obama’s National Security Advisor Susan Rice is at the top of Joe Biden’s list of potential running mates. Why? Because Rice “confessed to cover up a lot of the Obamagate surveillance crimes that had taken place during your campaign,” per Rion.

Rion then asked if Trump had an opinion on the subject. He did.

President Trump accuses the Obama Administration of spying on his 2016 campaign: "It's probably treason." pic.twitter.com/pSosTQOrca

He said that the Obama administration officials were caught “red-handed” using the intelligence agencies to spy on the Trump campaign. The president also said that if Biden chooses Susan Rice “that’s fine,” but is a “potential liability.”

“I think it’s the political crime of the century,” Trump said, before ending the briefing.

You can add the “Obama campaign,” which did not exist in 2016, to the growing list of people or entities that the president has falsely accused of treason.

Attorney General Bill Barr has already said a couple of times that John Durham’s investigation of Russia probe investigators and “Obamagate” was neither focusing on Obama nor Biden.

“All right. Well, as I’ve said a few times, no one under investigation in the Durham matter is running for president,” Barr told NPR in June. “And I’ve said publicly that neither President Obama or Vice President Biden are under investigation. And I’ve also said I’m committed to having the American people have a free choice in this election between the candidates and I don’t want the Department of Justice to be interfering in that.”

Nonetheless, the attorney general agrees that a “grave injustice, unprecedented in American history,” was committed against Trump and his associates.

The Russia probe was based on a “false and utterly baseless, Russian collusion narrative,” Barr said in May, railing against “two different standards of justice.”

“We can’t allow this to ever happen again,” he added.