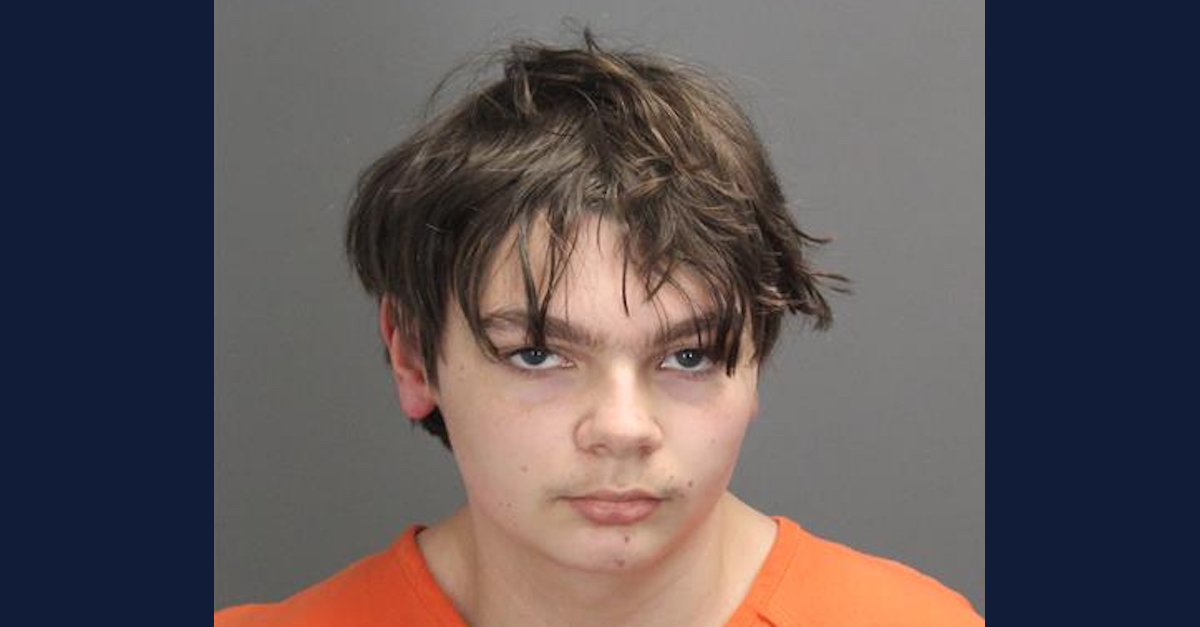 Two victims of the Nov. 30 school shooting at Michigan’s Oxford High School have filed a federal civil lawsuit against the Oxford Community School District and several administrators and staff members. The lawsuit alleges that the defendants ignored significant warning signs — including social media posts and warnings from parents that they were concerned about school safety — that violence was imminent.

Ethan Crumbley, 15, allegedly murdered the four students last Tuesday after searching for ammunition during class on Monday and drawing violent images depicting a deadly shooting on Tuesday. Hana St. Juliana, 14, Tate Myre, 16, and Madisyn Baldwin, 17, were killed; Justin Shilling, 17, died the morning after the shooting. School officials unsuccessfully attempted to contact his parents on Monday and failed to eject him from the school on Tuesday, prosecutors have alleged. Instead, video obtained by the authorities allegedly shows Crumbley leaving a Nov. 30 meeting the school district called with his parents, entering a bathroom, emerging with a handgun, and opening fire in the hallway. His parents refused to bring him home that day, so the district allowed him to return to class, according to Oakland County Prosecutor Karen McDonald.

Besides the school district, federal civil lawsuit filed Thursday morning names Superintendent Timothy Throne, Principal Steven Wolf, alleged Dean of Students Ryan Moore, two unnamed counselors, two unnamed teachers, and one unnamed “staff member.” The defendants other than the district itself are sued in their individual capacities, not in their official capacities, the lawsuit says.

The case was filed on behalf of Jeffrey Franz and Brandy Franz as a “next friend” for Riley Franz, 17, and Bella Franz, 14, their minor children. The lawsuit describes Riley as “an honor roll student preparing to enter college.” Bella “was a star athlete getting ready for driver’s training.”

“The horror of November 30, 2021 was entirely preventable,” the lawsuit says. “Each and every Defendant named herein created and increased the dangers then-existing at Oxford High School.”

Riley Franz was shot in the neck, the lawsuit says, “as a direct result of each and every one of the within enumerated actions of Defendants’, causing her severe trauma, post-traumatic stress disorder, fright, shock, terror, anxiety as well as physical and emotional injuries.”

Bella Franz “narrowly escaped the bullets discharged towards her, her sister, and her friends,” it continues. “She observed her sister, friends and classmates being shot and murdered, causing her severe trauma, fright, shock, terror, anxiety, post-traumatic stress disorder, and emotional injuries.” 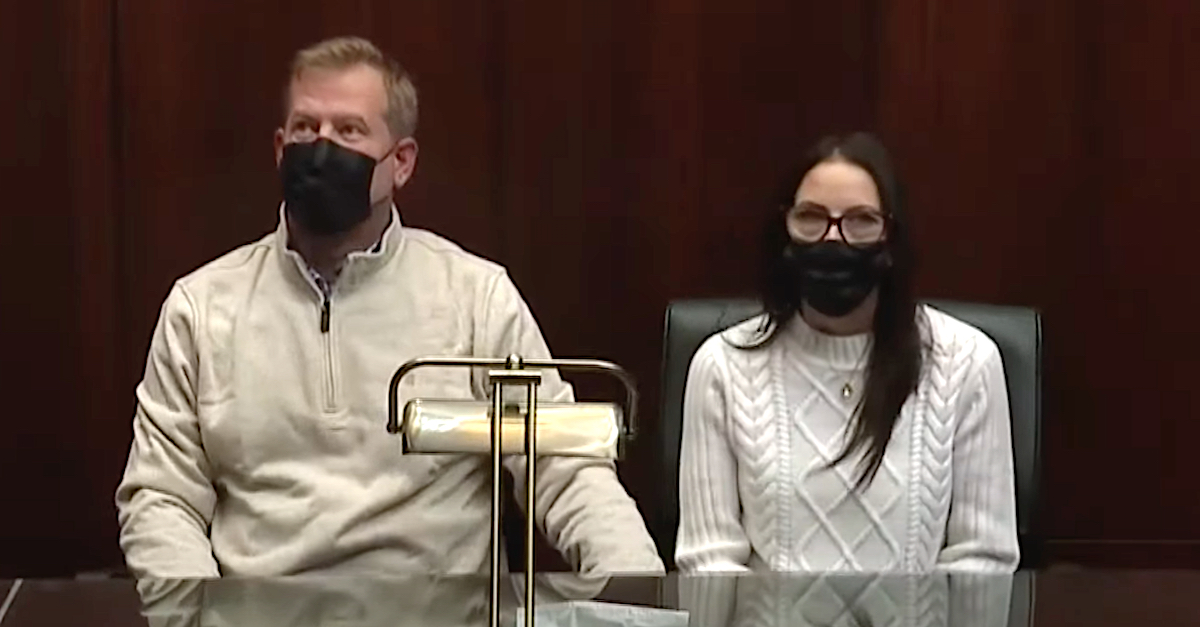 Jeffrey Franz and Brandi Franz appear during a Dec. 9, 2021 news conference to announce a civil lawsuit against the Oxford Community School District. (Image via screengrab from WZZM-TV/YouTube.)

“The individually named Defendants are each responsible through their actions for making the student victims less safe,” the suit adds. “The Oxford High School students, and Plaintiffs in particular, would have been safer had the Individual Defendants not taken the actions they did.”

The lawsuit names “psychological injuries to others” who were present during the attacks.

It continues by alleging that school administrators had “reviewed the social media posts of Crumbley prior to November 30, 2021,” and failed to act:

Upon information and belief, in the days leading up to the November 30, 2021, incident, Ethan Crumbley, acted in such a way that would lead a reasonable observer to know and/or believe that he was planning to cause great bodily harm to the students and/or staff at Oxford High School.

By way of example, and not limitation, previous to the November 30, 2021 incident, Ethan Crumbley posted countdowns and threats of bodily harm, including death, on his social media accounts, warning of violent tendencies and murderous ideology prior to actually coming to school with the handgun and ammunition to perpetuate the slaughter.

For example, a threat on social media included an update to his twitter account the night before which read, “Now I am become Death, the destroyer of worlds. See you tomorrow Oxford.”

On or about November 16, 2021, days prior to the actual incident, multiple concerned parents provided communications to Defendant WOLF with concerns about threats to students made on social media.

The parents’ communications to WOLF in part stated, “I know it’s been investigated but my kid doesn’t feel safe at school,” “He didn’t even want to go back to school today.”

That same day, November 16, 2021, WOLF emailed parents indicating, “I know I’m being redundant here, but there is absolutely no threat at the HS…large assumptions were made from a few social media posts, then the assumptions evolved into exaggerated rumors.”

Despite the warnings, the lawsuit says Throne “warned the students, via loudspeaker, to stop spreading information over social media and to stop relying on information on social media, reiterating that there were no threats that posed any danger to students at Oxford High School.”

The court papers also suggest that some of the threats were lodged directly at Riley and Bella Franz prior to the shooting.

Also contained in the lawsuit is a recitation of various Crumbley family social media posts — all of which were allegedly public — regarding the 9mm Sig Sauer handgun Ethan Crumbley is alleged to have used in the shooting.

On November 26, 2021, Ethan Crumbley posted a picture of the Sig Saur [sic] 9 mm semi-automatic handgun to his social media account with the caption, “just got my new beauty today” with an emoji with heart eyes, followed by, “Sig Saur [sic] 9 mm. Any questions I will answer.” Emphasis added.

At all times relevant hereto, Ethan Crumbley posted to his Instagram account a post with a picture and caption of the Sig Saur 9 mm semi-automatic handgun. This post was for public viewing and accessible to all Defendants.

Elsewhere, the lawsuit accuses the teacher who spotted Crumbley searching for ammunition during class of “knowingly and deliberately decid[ing] to exclude the school safety liaison officer from notice of such dangers.”  Wolfe and Throne, however, were allegedly notified, thereby “putting them on further alert of the threat.”  The staff “knew and/or should have known that the information regarding Ethan Crumbley’s inappropriate internet search would likely be relayed to Ethan Crumbley by his parents and would encourage and/or entice Ethan Crumbley into more affirmative actions,” the lawsuit further alleges.

The document says a “school policy of excluding backpacks in classroom” was not followed by the teacher who on Nov. 30 failed to search Ethan Crumbley’s backpack for evidence of a weapon after seeing the teen drawing violent pictures depicting a shooting.

Interestingly, the lawsuit says Wolf, the principal, “held a meeting with Crumbley and his parents (without the school safety liaison officer present) and . . . subsequently allow[ed] Ethan Crumbley to return to class where he was able to carry out a massacre of classmates.” Moore was also allegedly involved, the document says.  However, in a letter on Saturday, the superintendent indicated that the principal was not involved with that meeting: “[t]hese incidents remained at the guidance counselor level and were never elevated to the principal or assistant principal’s office,” Throne wrote.

“Defendants’ conduct was outrageous and shocks the conscience,” the lawsuit nonetheless continues. “Defendants are not entitled to governmental and/or qualified immunity.”

The papers allege civil rights and 14th Amendment violations (including state-created danger), additional 14th Amendment violations (including supervisory liability), and Monell liability under 41 U.S.C. § 1983. Monell liability involves “promulgating and maintaining de facto unconstitutional customs, policies, or practices rendering them liable for the constitutional violations,” the lawsuit notes. The case seeks “an amount in excess of $100 million” along with “interest, costs and attorneys’ fees, as well as punitive and/or exemplary damages.” 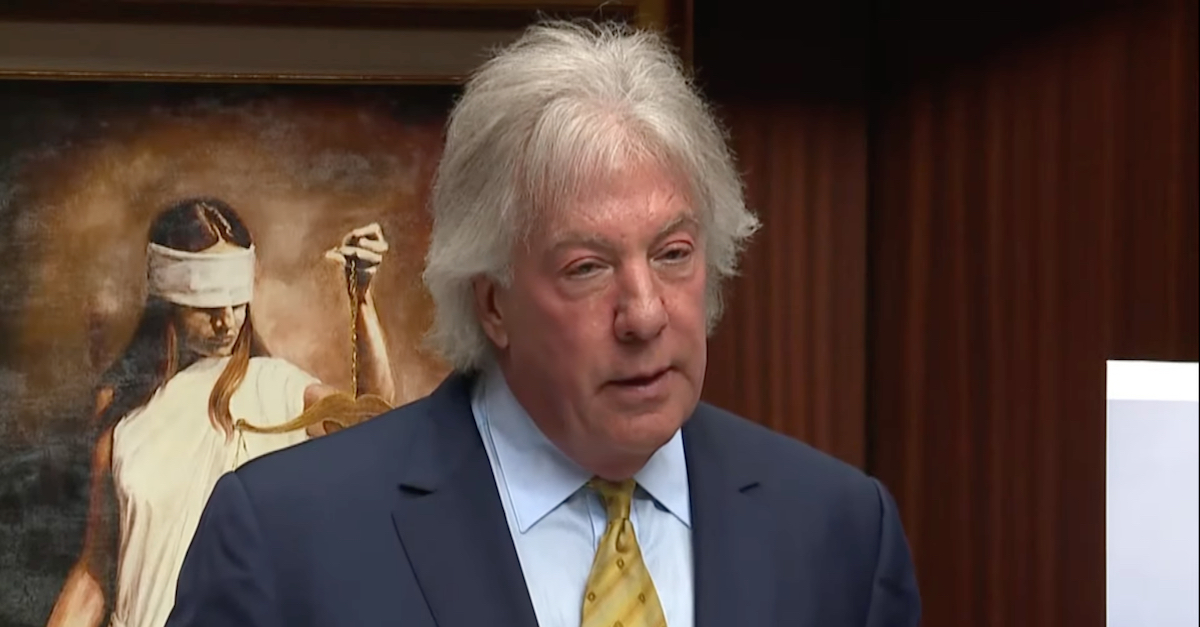 Geoffrey N. Fieger speaks at a Thus., Dec. 9, 2021 news conference about the Oxford High School shooting in Michigan. (Images via screengrab from WZZM-TV/YouTube.)

Attorney Geoffrey N. Fieger is lead counsel on the case. At an 11:00 a.m. Thursday press conference, he said the defendants “allowed a deranged, homicidal student to return to class with a gun in his backpack — with over 30 rounds of ammo in his backpack — when they knew he was a homicidal threat.”

He then took aim at America’s gun culture.

“I understand we can’t change the perverted values of the Second Amendment society overnight — values that prioritize gun ownership over the lives of our children,” he went on. “But we can make the cost of denying our own responsibility to stop this slaughter of our children so costly that maybe, just maybe,” more children will live.

“We hope by this lawsuit to make the financial cost of allowing children to be slaughtered very high — so as to compel people to do something,” he said.

The attorney said Crumbley and the school he allegedly attacked looked “remarkably” like Columbine killers Eric Harris and Dylan Klebold and the school they attacked on April 20, 1999. Fieger also was involved with Columbine litigation. 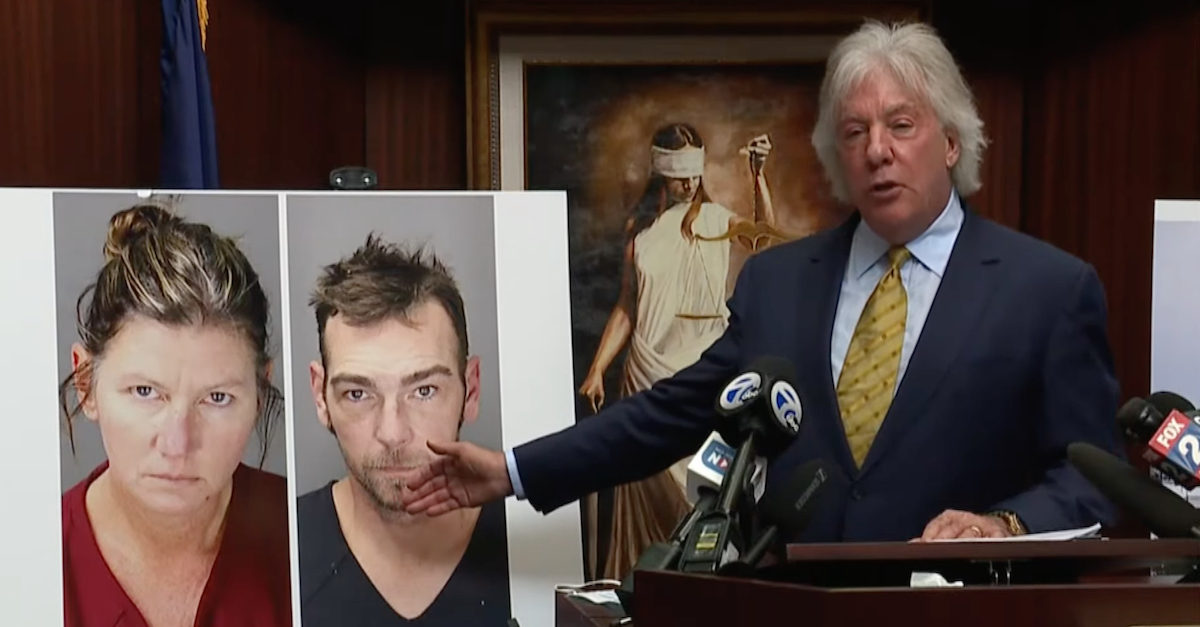 Geoffrey N. Fieger referred to Ethan Crumbley’s parents as “poster children for the Second Amendment gun nuts” during a Thus., Dec. 9, 2021 news conference about the Oxford High School shooting in Michigan. (Images via screengrab from WZZM-TV/YouTube.)

He also said he understood that his case would be difficult to win because lawmakers and insurance companies have made it hard for victims to sue. Here’s that section of the attorney’s monologue:

The administrators, the counselors, the teachers at Oxford High School bear responsibility. I am certain that the Oakland County Sheriff’s Department believes that had the administrators and counselors called in the police liaison — who was there and who was available to them — that Ethan Crumbley would not have been allowed to leave whatever room he was in, walk into a bathroom, arm himself, walk out, and shoot Riley, almost kill Bella, and kill four others and wound eight others. I’m absolutely positive of it. And I think courts will agree. The only challenge we have is getting through the labyrinthian myriad of laws that have been set up by our politicians in this state to allow them to stand up in front of cameras and say how sad they are that these events occurred but unfortunately the victims aren’t going to be able to do anything because we’ve passed laws that make it impossible for them to sue or do anything. How ridiculous!

Rather than being “transparent,” Fieger predicted that the school district was currently holed up with its insurance providers trying to figure out how to get his lawsuit thrown out of court.

“That ain’t gonna happen,” the attorney bombastically charged while pondering whether the defendants would be forthcoming. “They’re going to lawyer up with insurance company lawyers, and they’re gonna deny, deny, deny, and deny. And then, when they get tired of denying, they’ll still keep denying.”

Watch the attorney’s press conference below:

Editor’s note: Moore subsequently filed court papers in mid-December to indicate that he wasn’t even the Dean of Students at the high school when the shooting occurred.  Those papers accuse Fieger of filing court papers filled with “lies and misrepresentations.”  Additional coverage of Moore’s reply is available here.