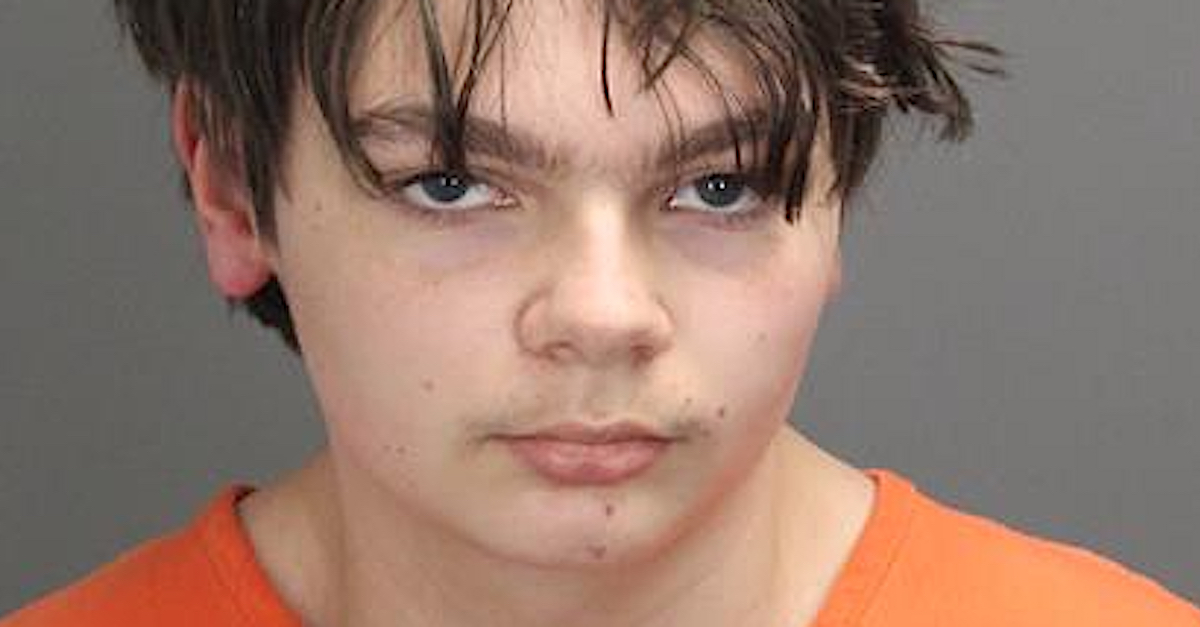 The teen accused of murdering four classmates in Michigan on Tuesday told school officials that “shooting sports are a family hobby” when confronted about his decision to search for ammunition on his cell phone during class the day prior to the killings.

Ethan Crumbley, 15, is charged with one count of terrorism causing death, four counts of first-degree murder, seven counts of assault with the intent to murder, and twelve weapons offenses for carrying a firearm during the commission of a felony, according to criminal complaint filed Wednesday.  Though prosecutors outlined their version of the events which led to the deaths of four teens inside the school — allegedly by the hands of Crumbley — school officials have until now been relatively silent as to what happened.

In a letter obtained Saturday by Detroit NBC affiliate WDIV and by Deadline Detroit, Tim Throne, the school superintendent, described the first incident on Monday that raised concerns about Crumbley’s behavior.

On Nov. 29, the suspect was discovered by a teacher to be viewing images of bullets on his cell phone during class. The suspect met with a counselor and another staff member and indicated he and his mother recently went to the shooting range and that shooting sports are a family hobby. Consistent with our school policies and procedures, the school attempted to make contact with the student’s mother to discuss the incident but did not initially hear back. The next day, his parents confirmed his account.

Though the school didn’t note it, under Michigan law, individuals under the age of 18 are not allowed to possess firearms “in public” unless they “under the direct supervision of an individual 18 years of age or older.”  The law contains additional exceptions for individuals under 18 to possess firearms “at, or going to or from, a recognized target range or trap or skeet shooting ground if, while going to or from the range or ground, the firearm is enclosed and securely fastened in a case or locked in the trunk of a motor vehicle.”

The school superintendent continued by describing the events of the following day — the day of the deadly shootings — from his perspective.

On the morning of Nov. 30, a teacher observed concerning drawings and written statements that have been detailed in media reports, which the teacher reported to school counselors and the Dean of students. The student was immediately removed from the classroom and brought to the guidance counselor’s office where he claimed the drawing was part of a video game he was designing and informed counselors that he planned to pursue video game design as a career. The student’s parents were also called in. Because it was difficult to reach the parents, the student remained in the office for an hour and a half while counselors continued to observe, analyze and speak with the student. While waiting for his parents to arrive, the student verbalized his concern he would be missing homework assignments and requested his science homework, which he then worked on while in the office.

At no time did counselors believe the student might harm others based on his behavior, responses and demeanor, which appeared calm. In addition, despite media reports, whether or not the gun was in his backpack has not been confirmed by law enforcement to our knowledge nor by our investigation at this time.

After Crumbley’s since-arrested-and-charged parents arrived on campus, school counselors asked them for answers.  Again, from the superintendent’s letter verbatim:

While both of his parents were present, counselors asked specific probing questions regarding the potential for self-harm or harm to others. His answers, which were affirmed by his parents during the interview, led counselors to again conclude he did not intend on committing either self-harm or harm to others. The student’s parents never advised the school district that he had direct access to a firearm or that they had recently purchased a firearm for him.

Counseling was recommended for him, and his parents were notified that they had 48 hours to seek counseling for their child or the school would contact Child Protective Services. When the parents were asked to take their son home for the day, they flatly refused and left without their son, apparently to return to work.

Given the fact that the child had no prior disciplinary infractions, the decision was made he would be returned to the classroom rather than sent home to an empty house. These incidents remained at the guidance counselor level and were never elevated to the principal or assistant principal’s office.

While we understand this decision has caused anger, confusion and prompted understandable questioning, the counselors made a judgment based on their professional training and clinical experience and did not have all the facts we now know. Our counselors are deeply committed longstanding school members who have dedicated their lives to supporting students and addressing student mental health and behavioral issues.

The letter also is silent as to whether school officials either attempted to search — or actually did search — Ethan Crumbley’s backpack, his person, or any of his other papers or effects.

Though the Fourth Amendment’s guarantees against unreasonable searches and seizures apply to school pupils the same as they apply to ordinary people, the U.S. Supreme Court has held that the Fourth Amendment’s requirements are relaxed in school settings.  In New Jersey v. T. L. O., the nation’s high court said school searches need to be based only on “reasonable suspicion” — not on the higher “probable cause” standard or the warrant requirement of the Fourth Amendment itself.  The words of Justice Harry Blackmun, who wrote separately to concur with the court’s 1985 judgment in T. L. O., are eerily relevant:

Education “is perhaps the most important function” of government, Brown v. Board of Education, 347 U. S. 483, 493 (1954), and government has a heightened obligation to safeguard students whom it compels to attend school. The special need for an immediate response to behavior that threatens either the safety of schoolchildren and teachers or the educational process itself justifies the Court in excepting school searches from the warrant and probable-cause requirement, and in applying a standard determined by balancing the relevant interests.

Not every search is reasonable, however. In Safford Unified School District v. Redding (2009), the Supreme Court held that a strip search of a student’s underwear as part of an investigation into non-prescription painkillers was unreasonable.  To pass constitutional muster, searches by school staff needed to be “reasonably related to the objectives of the search and not excessively intrusive in light of the age and sex of the student and the nature of the infraction,” the Redding court rationed.

Two other U.S. Supreme Court cases involving school searches, Vernonia School District 47J v. Acton (1995) and Board of Education v. Earls (2002), involve random drug testing and blanket drug testing, respectively.  The issues are slightly distinct because the cases involved overall policies and not individualized suspicions aimed at particular students.  Still, Acton noted that school districts may employ “a degree of supervision and control that could not be exercised over free adults,” and Earls said blanket drug testing policies “reasonably serve[]” an “important interest in detecting and preventing drug use among its students.”  The policies and the subsequent searches that flowed therefrom were constitutional, the high court ruled in both matters.

The Michigan school superintendent’s letter says an independent, external investigation will be launched into the shooting that claimed four lives.

Ethan Crumbley stood mute at an arraignment; a judge entered a not guilty plea on his behalf.  His parents pleaded not guilty Saturday morning to the counts they separately face.