Top 4 Takeaways from Hunter Biden Interview, in Which He Admitted Only to ‘Poor Judgment’ 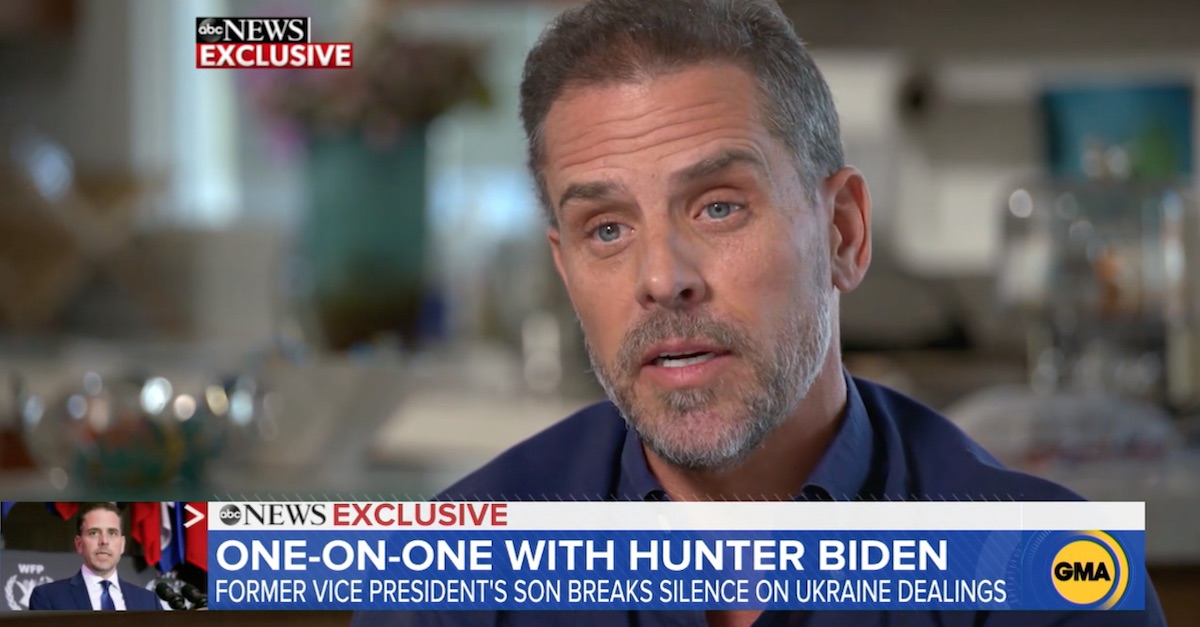 While Joe Biden was the Vice President of the United States, his son Hunter Biden was on the board of a Ukrainian natural gas company called Burisma. President Donald Trump and Rudy Giuliani have been reminding us of this ever since, insisting that Joe Biden bragging about the firing of a corrupt prosecutor Republican lawmakers also wanted fired doesn’t pass the smell test; Trump and Giuliani say that this was evidence that something major was amiss because that prosecutor was investigating Burisma. But a former chief prosecutor of Ukraine has since said that Hunter Biden didn’t violate any laws, and the younger Biden himself maintains that he only spoke with his father about Burisma once. The extent of that conversation? Joe Biden saying “I hope you know what you’re doing,” and Hunter replying “I do.”

Hunter Biden finally responded at length to Trump and Giuliani in an ABC News interview on Tuesday, in which he admitted only to “poor judgment.” Here are the main takeaways from the interview, which also addressed the younger Biden’s China maneuverings.

1. Hunter Biden said he was only guilty of “poor judgment” and failing to see that a Trump or Giuliani would come along one day and promote conspiracy theories about his business dealings.

On opening the door for “unethical people” to harm his father’s campaign:

I gave a hook to some very unethical people to act in illegal ways to try to do some harm to my father. That’s where I made the mistake. So I take full responsibility for that. Did I do anything improper? No, not in any way. Not in any way whatsoever.

On making a “mistake” but not doing something unethical:

I take — full responsibility for that. Do I — did I do anything improper? No, and not in any way. Not in any way whatsoever. I joined a board, I served honorably. I did — I focused on corporate governance. I didn’t have any discussions with my father before or after I joined the board as it related to it, other than that brief exchange that we had.

On Trump and Giuliani:

What I regret is not taking into account that there would be a Rudy Giuliani and a president of the United States that would be listening to this — this ridiculous conspiracy idea.

2. Hunter Biden disputed the idea that he was not qualified to be on the Burisma board, but admitted it was “probably” true he wouldn’t have been on the board if his last name wasn’t Biden.

Here Biden was responding to a key aspect of Trump’s allegations of improper dealings: that he had no business doing business, as he knows nothing about anything, especially energy.

Biden responded by saying that he had as much knowledge as anyone on the Burisma board — “if not more.”

[My father] read the press reports that I’d joined the board of Burisma which was a Ukrainian natural gas company. And there’s been a lot of misinformation about me, not about my dad. Nobody buys Dad. But — by this idea that I was unqualified to be on the board.

I think that I had as much knowledge as anybody else that was on the board — if not more.

After defending his knowledge, Biden admitted that he probably wouldn’t have been on the Burisma board if he wasn’t the son of the Vice President of the United States.

“Probably not, in retrospect. But that’s — you know — I don’t think that there’s a lot of things that would have happened in my life if my last name wasn’t Biden,” he said. “Because my dad was Vice President of the United States. There’s literally nothing, as a young man or as a full grown adult that — my father in some way hasn’t had influence over. It does not serve either one of us.”

President Trump has accused Biden of “getting billions of dollars” from China — or, as the president put it, that Biden “walk[ed] out of China with $1.5 billion in a fund and the biggest funds in the world can’t get money out of China and he’s there with one quick meeting and he flies in on Air Force Two” in 2013.

Trump has also suggested this was a “payoff”:

The president said on Thursday that Hunter Biden was not qualified for that business, noting that he had been discharged from the Navy Reserve after testing positive for cocaine. “He got kicked out of the Navy,” Mr. Trump said. “All of a sudden he’s getting billions of dollars. You know what they call that? They call that a payoff.”

Hunter Biden’s lawyer has already denied that and attempted to explain his client’s actual role [emphasis ours]:

However, George Mesires, lawyer for Hunter Biden, said in an interview earlier this year that his client’s role has been misconstrued. He said Hunter Biden was on the board of the advisory firm that did not directly invest, but instead advised those who did.

Moreover, Mesires said, it was not until October 2017 that Hunter Biden acquired a financial stake in BHR. Hunter Biden bought a 10 percent equity interest that was worth $430,000 in July, Mesires said. At least half of the firm’s stake is owned by Chinese entities, according to business records.

Biden chose to resign from the Chinese-backed private equity firm BHR Equity Investment Fund Management Co. amid the scrutiny, and committed not to work on foreign boards while his father is president. Biden has now responded to the president’s claim that he was “forced” to leave BHR. Biden said it was his decision.

He also said neither he nor his firm collected “billions,” calling that idea “crazy.” He said if that were the case, he wouldn’t have been doing the interview. He also said that he never spoke with his father about his business during a 13-hour flight to China in 2013. That was the flight Trump referred to above. Hunter Biden’s daughter was also on the flight.

4. Hunter Biden says the Trumps can talk about him all they want, but they are “irrelevant.”

You may know by now that there’s an impeachment inquiry afoot related to a whistleblower complaint saying that the president solicited foreign interference in the 2020 election by asking Ukraine President Volodymyr Zelensky to investigate Hunter and Joe Biden. Hunter Biden said that Trump et al. have gone after him, and that doesn’t keep him up at night.

“Being the subject of Donald Trump’s ire is a feather in my cap. It’s not something that I go to bed nervous about at night at all. The reason I’m able to do that is because I am absolutely enveloped in love of my family,” he said. “Unlike them, I don’t spend a lot of time thinking about them. I really don’t. It’s all noise. And what they do is they create just an enormous amount of noise. I have to then answer questions — about accusations made by probably the most unethical group of people that we’ve ever seen in this republic.”

He said the Trump family is “out of a B movie” before taking a shot at Donald Trump Jr. in particular.