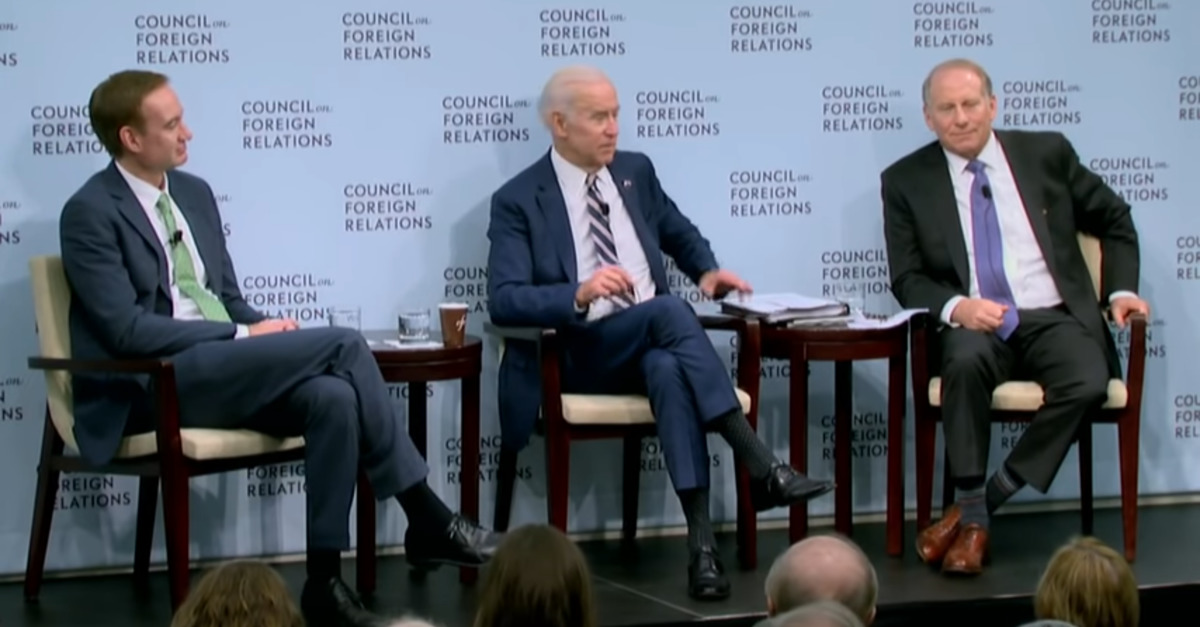 Former Vice President of the United States Joe Biden reportedly “bragged” about his role in the firing of a prosecutor who was, at the time, investigating his son’s company.

The prosecutor to be fired was Ukrainian Prosecutor General Viktor Shokin. The threat was issued to Ukrainian President Petro Poroshenko. In March 2016, Biden told Poroshenko the Obama administration was prepared to rescind $1 billion in U.S. loan guarantees unless Shokin was given the boot, according to an investigative column in The Hill.

There was initially some push back from Ukrainian authorities on the demanded dismissal, Biden said, adding that he “had gotten a commitment from Poroshenko” that action would be taken against Shokin but this allegedly had yet to occur.

Biden himself described the turn of events at an event hosted by the Council on Foreign Relations in January 2018:

The U.S. and the International Monetary Fund didn’t believe Shokin was doing enough to combat corruption in the Ukraine and the prosecutor was also facing severe criticism at home over perceptions that he or his subordinates were corrupt themselves.

After Poroshenko and the Ukrainian parliament ousted Shokin, The New York Times reported “Shokin had been criticized for not prosecuting officials, businessmen and members of Parliament for their roles in corrupt schemes during the government of former President Viktor F. Yanukovych.”

There was at least one notable prosecution in progress, however, at the time Shokin was sacked: a corruption probe into Burisma Holdings, a natural gas company which employed Hunter Biden.

According to The Hill‘s Executive VP John Solomon, Ukrainian officials have a file on Burisma holdings which “shows prosecutors identified Hunter Biden, business partner Devon Archer and their firm, Rosemont Seneca, as potential recipients of money.”

Shokin was also interviewed for the report and said he made “specific plans” for the foiled investigation which “included interrogations and other crime-investigation procedures into all members of the executive board, including Hunter Biden.”

U.S. banking records show Hunter Biden’s American-based firm, Rosemont Seneca Partners LLC, received regular transfers into one of its accounts — usually more than $166,000 a month — from Burisma from spring 2014 through fall 2015, during a period when Vice President Biden was the main U.S. official dealing with Ukraine and its tense relations with Russia.

In total, Biden’s and Archer’s Rosemont Seneca firm received just over $3 million from Burisma holdings while Joe Biden was the Obama administration’s point man for the Ukraine. Prosecutors were reportedly suspicious about the merits of those payments but the very abrupt end to the investigation prevented those inquiries from being followed up on.

And as for that “solid at the time” replacement for Shokin? He’s now suspicious about the circumstances surrounding the end of the Biden-linked investigation, too.

General Prosecutor Yuriy Lutsenko told Solomon that “members of the Board obtained funds as well as another U.S.-based legal entity, Rosemont Seneca Partners LLC, for consulting services” and that he thinks some of the evidence would interest U.S. authorities.

Lutsenko also criticized the way the elder Biden had handled the situation that led to his own promotion.

“Unfortunately, Mr. Biden had correlated and connected this aid with some of the HR (personnel) issues and changes in the prosecutor’s office,” the prosecutor said.

[image via screengrab/Council on Foreign Relations]