The former chief prosecutor of the Ukraine, recently catapulted to international prominence as a central figure in the ongoing whistleblower complaint scandal, doesn’t believe Joe Biden‘s son Hunter Biden violated any laws. Newly released documents, however, only seem to complicate the matter.

“From the perspective of Ukrainian legislation, he did not violate anything,” onetime Ukrainian prosecutor general Yuri Lutsenko said in an interview with The Washington Post released Thursday.

President Donald Trump and his personal attorney Rudy Giuliani have spent several months attempting to gin up controversy regarding the younger Biden’s role on board of directors for hydrocarbon company Burisma Holdings.

In many ways, of course, they’ve succeeded in doing exactly that. Direct–or even circumstantial evidence–of Hunter Biden’s alleged wrongdoings, however, has been scarce to nil.

The controversy began when investigative columnist John Solomon cast an askance eye at Biden’s tenure on the Burisma board. As it turns out, Burisma’s owner was being investigated for possible corrupt conduct taking place prior to Hunter Biden’s arrival. Heading that investigation was former Ukrainian prosecutor general Viktor Shokin–Lutsenko’s predecessor (Yuriy Sevruk served in an acting role a few months after Shokin resigned and until Lutensko took over).

Shokin claims he was forced out because of his investigation into Burisma and the potential embarrassment it might cause the Biden family. Instrumental in Shokin being replaced by Lutsenko was pressure brought to bear against the Ukraine via the Obama administration–who had Biden threatened to cut off aid.

But according to Friday’s report in the Post, “the investigation into Burisma was dormant” at the time Shokin was sacked. At the time he was canned, “Diplomats, anti-corruption activists and some officials accused Shokin’s office of blocking reform and stalling investigations.” Per Reuters:

Shokin’s critics included his deputy, Vitaliy Kasko, who publicly resigned in February 2016 saying the General Prosecutor’s office was a “brake on the reform of criminal justice, a hotbed of corruption”. Shokin’s office dismissed the resignation as a stunt.

A video of the elder Biden bragging about forcing Shokin’s removal fanned the would-be Biden corruption controversy when it was widely shared and publicized in early spring. Solomon’s reporting apparently got Trump’s attention–prompting the 45th president to dispatch Giuliani to investigate while he personally promoted the nebulous corruption charge in public and in private conversations.

On Thursday evening, Solomon reported on “a newly sworn affidavit” from Shokin wherein the former chief prosecutor claims he was testifies “that when he was fired in March 2016, he was told the reason was that Biden was unhappy about the Burisma investigation.”

That affidavit reads, in relevant part:

The truth is that I was forced out because I was leading a wide-ranging corruption probe into Burisma Holdings, a natural gas firm active in Ukraine and Joe Biden’s son, Hunter Biden, was a member of the Board of Directors.

“On several occasions President [Petro] Poroshenko asked me to have a look at the case against Burisma and consider the possibility of winding down the investigative actions in respect of this company but I refused to close this investigation,” Shokin continued.

Lutsenko says the whole issue has been overblown.

“Hunter Biden cannot be responsible for violations of the management of Burisma that took place two years before his arrival,” the former Ukrainian prosecutor told the Post.

This attitude is a notable change of heart for Lutsenko–who reopened the inquiry into Burisma earlier this year (after initially closing said inquiry himself) for reasons he never quite explained and which ultimately led nowhere for at least the second time.

Some have speculated that Lutsenko dusted off the Burisma files as a favor to Giuliani after the pair met in January.

But Lutsenko portrays his time with Giuliani as innocent.

“I took a vacation,” Lutsenko told the Post. “I took my youngest son, I showed him New York and I met with Mr. Giuliani. I had a long conversation with him. But this was only in the forum of exchanging information.”

Adding another layer to this controversy, is that Lutsensko, the former prosecutor general who now says Hunter Biden didn’t violate Ukraine law, was praised by Trump on a July 25 phone call with Ukrainian President Volodymyr Zelensky, according to the whistleblower complaint garnering national attention:

It should be noted that the five-page memo of this call that the White House released did not name Lutensko. Others, based on the context, believed Trump was actually talking about Shokin. Trump was using the past tense –“I heard you had a prosecutor”– at a time when Lutensko was still prosecutor general. 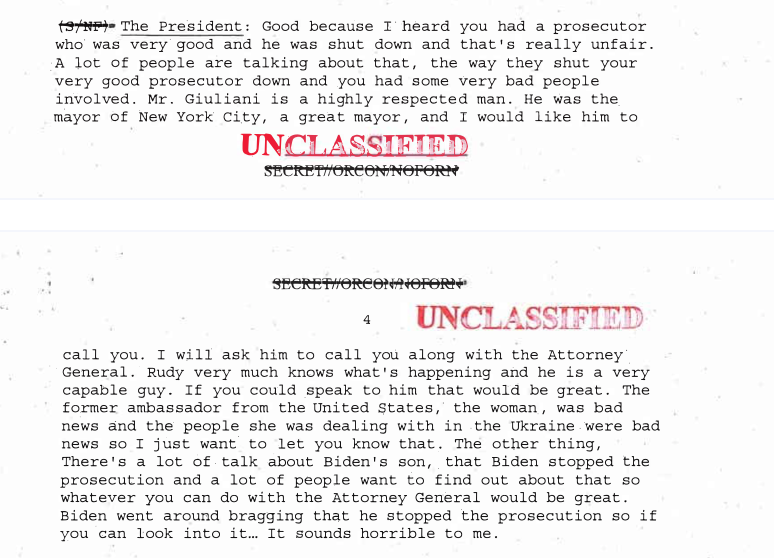 Lutensko was Prosecutor General from May 2016 to August 29, 2019. Ruslan Riaboshapka is now serving in that role.

Shokin Statement by JohnSolomon on Scribd