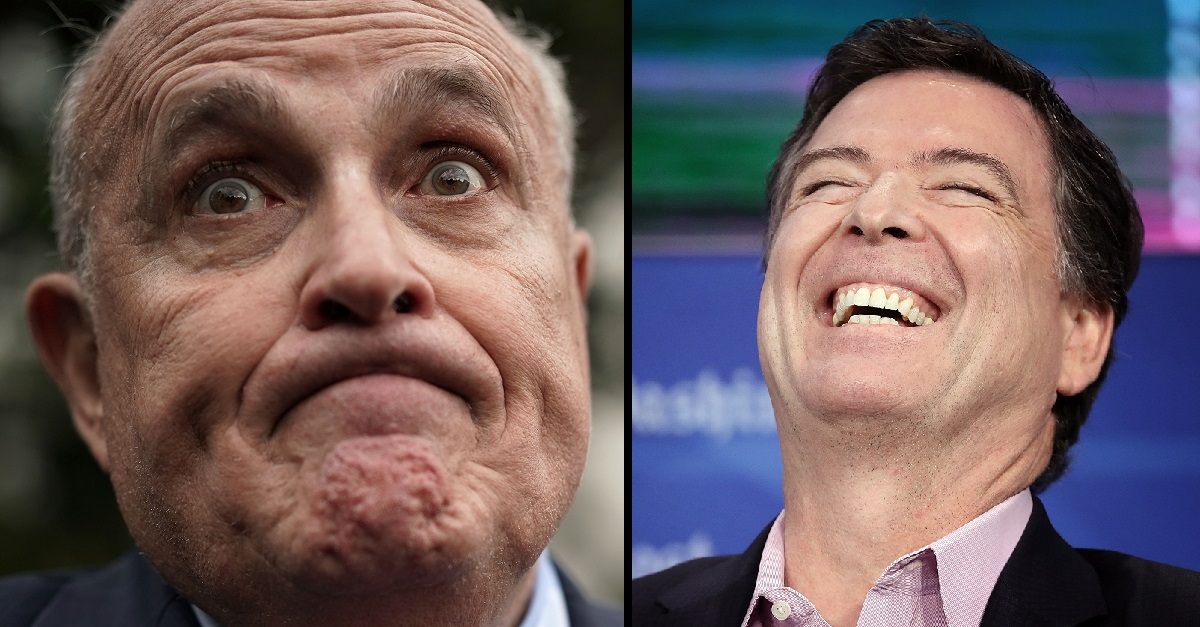 President Donald Trump‘s attorney, Rudy Giuliani, on Sunday accused former FBI Director James Comey of committing either treason or something close to it. Treason is a constitutional offense made punishable by death by federal statute. Giuliani’s version of the crime is highly inaccurate when compared to what the Constitution actually says.

The former Mayor of New York made the comments to host John Catsimatidis on Catsimatidis’s show, “The Cats Roundtable.”

The core of Giuliani’s comments are summed up as follows: Comey was involved with and helped strategize a vast conspiracy of loyalists to President Barack Obama and antagonists to retired lieutenant general Michael Flynn. The goal, Giuliani said, was to take down Trump.

Giuliani said his theory was a “guess,” an “experienced prosecutor’s hypothesis,” but added, “I do this pretty well.”

“I think they have Comey, I think despite the fact that he got let off a couple of times,” Giuliani said. “Insiders are nosey; I believe that Attorney General Barr is saving it for the really good case.”

In other words, Giuliani suggested William Barr was going to drop charges on Comey at some point that would be well-timed — perhaps to influence the election. For what it’s worth, Barr hasn’t ruled out John Durham Probe indictments dropping close to the election.

What did Comey do? He didn’t commit treason, but he committed treason, per Giuliani.

“What is overthrowing government by illegal means? It’s a coup; treason; and it’s also treason,” he said.

Giuliani is completely legally incorrect about the definition of treason.

Under Article III, Section 3, treason is defined as follows:

Treason against the United States, shall consist only in levying war against them, or in adhering to their enemies, giving them aid and comfort. No person shall be convicted of treason unless on the testimony of two witnesses to the same overt act, or on confession in open court.

The Congress shall have power to declare the punishment of treason, but no attainder of treason shall work corruption of blood, or forfeiture except during the life of the person attainted.

Treason, it has been written, is the only crime specifically contained within and defined by the Constitution. The Constitution makes it explicitly hard to prove — that’s to prevent the crime from being charged to silence dissidents against the king the president.

The punishment for treason under federal statute is a minimum of five years in prison and a maximum of death.

The host ended the broadcast before Giuliani had time to explain further.

Earlier on the broadcast, Giuliani suggested that a vast conspiracy against Trump stretches as far back as six years: “the answer lies in what happened before 2016, where this all started,” he said.

According to Giuliani, former General Stanley A. McChrystal noticed that Brennan’s CIA intelligence was “constantly misrepresenting, lying” that ISIS was being defeated when, indeed, it was growing; then-President Obama “did nothing” to fight back, Giuliani said. Meanwhile, Flynn kept telling Obama that the then-president needed to hit back; Obama didn’t. “ISIS was bigger than ever,” Giuliani claimed.

Giuliani claimed Trump had it right all along, even before he was a candidate, that ISIS needed to be swiftly dealt with by the U.S. military.

This fight between Flynn and Obama’s administration, according to Giuliani, eventually consumed the FBI as it became clear Trump would win the election with Flynn by his side as national security adviser. Giuliani noted that former agent Peter Strzok said he would “prevent” Trump from being president. “They were going to knock [Trump] out with Manafort,” and there are “actually witnesses” saying there was a concerted effort to take out Trump, Giuliani said. That alleged effort included the now-infamous Access Hollywood/Billy Bush recording of Trump saying he grabbed women’s private parts. The effort also allegedly included former FBI attorney Lisa Page, Giuliani said.

Catsimatidis prodded Giuliani by saying Page and Strzok were “protected from the top.”

Giuliani claimed his experience as a federal prosecutor taught him the proper practice for such an interrogation. His suggested method is not the way interrogations are generally done, however.

Giuliani called Mueller or his team “Democratic prosecutor[s]” who tried to take down Trump by pressing Flynn and hoping he would flip by implicating Trump. The alleged conspirators tried to “break this guy,” Giuliani claimed, with reference to Flynn. Flynn was “going to tell us what we want to hear about Trump and Russia,” he hypothesized in a possible conversation among the alleged conspirators.

Giuliani said Flynn never gave prosecutors what they wanted. He also claimed that prosecutors never go after alleged unregistered foreign agents unless their motivation is “political.” Giuliani, in rambling out that claim, seemed to suggest that such cases are “criminal” when they involve political foes. Or, in his strict verbatim: “They never ever ever ever ever charge criminals; they charge crimes to regular people for that, and they do criminal only when they’re politicizing it.” (Whatever that means.)

Flynn caved to the pressure to protect his family, including his son, and his finances, Giuliani said. “People do plead guilty at times to things they didn’t do because the practical necessity of it is so great, and that’s what happened” to Flynn, he opined.

Throw in a few other names, such as George Papadopoulos and Carter Page, and you’ve got the makings of a vast left-wing conspiracy. Comey was involved in this “awful chapter” in the history of the FBI which shows core corruption in the Obama Administration, Giuliani said.

And that’s why he thinks Comey is going to be charged with “treason” — or something “close.” (Whatever that is.)

On Monday afternoon, President Trump accused Obama of committing a crime but declined to elaborate.

“You know what the crime is,” Trump said. “The crime is very obvious to everybody.”

Editor’s note:  the legal explanation of what constitutes treason has been edited lightly for clarity after publication.