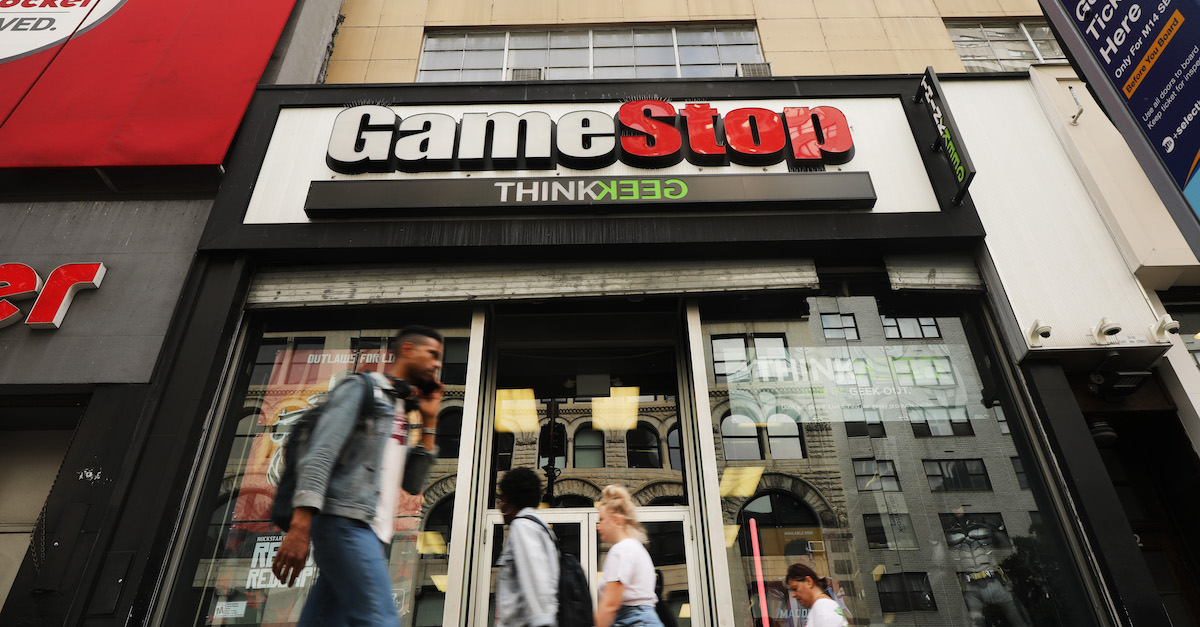 The ongoing saga surrounding GameStop’s skyrocketing stock price, as fueled by Redditors on a subreddit called “WallStreetBets,” is drawing the legal attention of regulators and professors.

In brief, professional investors tried to make money betting against GameStop’s future chances of success, and Redditors rallied a massive purchase of the company’s stock price to stiff the pros and force them to lose money.

GameStop’s stock price reached a dizzying high of $492.02 per share just after 2:00 p.m. on Thursday after registering at about $126 per share two and a half hours earlier.  The day before, the price maxed out at about $372 per share. The day before that, the price topped out at about $148 per share. The company spent almost its entire existence prior to the Redditors’ efforts selling its shares at between $5 and $20 each, save for a few spikes lasting several months each into the $50 range.  Noting was ever close to the $492.02 price which occurred Thursday afternoon.

It is possible (indeed necessary) to be critical of both sides; the shorts and the longs. The shorts had taken a more than 100% position in the stock. That means that they had sold more shares than existed. This implies that someone was cheating, perhaps by executing “naked” shorts (short sales where you have not borrowed the stock in advance). That is certain to push the stock down and is arguably evidence of manipulation.

Here, we asked him to back up a bit for explanation:

To sell a stock on the market , you have to own it or borrow the shares (with some minor exceptions). You cannot borrow more than 100%; if the shares shorted exceed the number outstanding, someone has sold what he does not own or has borrowed.

Coffee continued further by making allusions to the French Revolution:

But the new development is on the long side. We have a major new development in this case (and in several other stocks, such as AMC): the proletariat of retail investors has revolted and stormed the Bastille, overwhelming the aristocrats and their hedge funds.

This is a problem for regulators because it is very hard to regulate the mass of investors when they act irrationally. While some will call this manipulation, investors expressing their sincere (if crazy) views about valuation is not fraud.

Fraud and manipulation occur when someone disseminates false information with scienter or where there is collusion.

Scienter is a legal term for knowledge of wrongdoing; in securities law, the Supreme Court has described it as the “intent to deceive, manipulate, or defraud.” Prof. Coffee continued, adding a prediction:

Evidence of collusion is still very thin (perhaps some will arise on closer investigation); these events were not a “pump and dump” scheme.  If you want to slow the market’s exuberance, the best options are to encourage brokers to impose higher margin requirements for high risk stocks, restrict the sale of options on higher risk stocks, and brief trading halts. Possibly the one new development that you would want to chill is Reddit’s “WallStreetBets” website, but the First Amendment is a real barrier here if the speakers are only providing statements of opinions.  My prediction: the irrational investors in GameStock are about to lose a lot of money over the next week or two and with that pain will come some wisdom.

The Securities and Exchange Commission (SEC), which regulates the financial markets, released a statement Wednesday which appears to have been aimed at some of the GameStop purchases:

We are aware of and actively monitoring the on-going market volatility in the options and equities markets and, consistent with our mission to protect investors and maintain fair, orderly, and efficient markets, we are working with our fellow regulators to assess the situation and review the activities of regulated entities, financial intermediaries, and other market participants.

Others posited that the SEC may shut down grading of GameStop stock using so-called “severe market disruption” authority. It could also issue rules concerning Reddit.

“Some people on the Internet will be surprised when the SEC investigates them for market manipulation,” tweeted Prof. James Fallows Tierney of the University of Nebraska College of Law (in apparent disagreement with Prof. Coffee, above). He suggested that the GameStop situation looks a little bit like a pump and dump scheme — “when fraudsters drum up support for a worthless stock before selling to dummies” — but does not quite fit the usual mold. Rather, he suggested that regulators might use Section 9 of the Securities Exchange Act of 1934 (codified at 15 U.S.C. § 78i) to deal with “manipulation” in the markets.

Securities regulators have tools beyond “fraud” at their disposal to get at other objectionable market practices. One such tool is Section 9 of the ’34 Act, which prohibits manipulation. The SEC once called it “the very heart” of the act. https://t.co/B2amYvRAX7

Section 9(a)(2) makes it illegal to raise the price of a stock “for the purpose of inducing the purchase … of such security by others.”

But the SEC is undoubtedly looking into it.

Maybe it is or isn’t a winning theory. But putting it to the test is costly. The SEC typically has leverage to get its targets to settle.

Tierney then noted the work of Duke Law Prof. Gina-Gail S. Fletcher, who has been called one of the nation’s top experts on market manipulation by other colleagues. Fletcher’s work revealed how infrequently the SEC has used the laws at its disposal to pursue alleged market manipulators. Now, some are questioning what constitutes protected speech and what constitutes illegal manipulation — and whether the SEC will use these laws to act.

As @ProfFletcher noted in a recent @DukeLawJournal article, “the SEC has not made much use of this provision.” Maybe that’ll change soon.

(The rest of her article, about open market manipulation, is great and worth reading!)https://t.co/NsxRo3GuVk

There are lots of aspects to this captivating story that I haven’t mentioned.

But on another level, it highlights securities law’s weirdness. Our law has long taken an inconsistently skeptical view of market manipulation. Why are some practices allowed, others not?