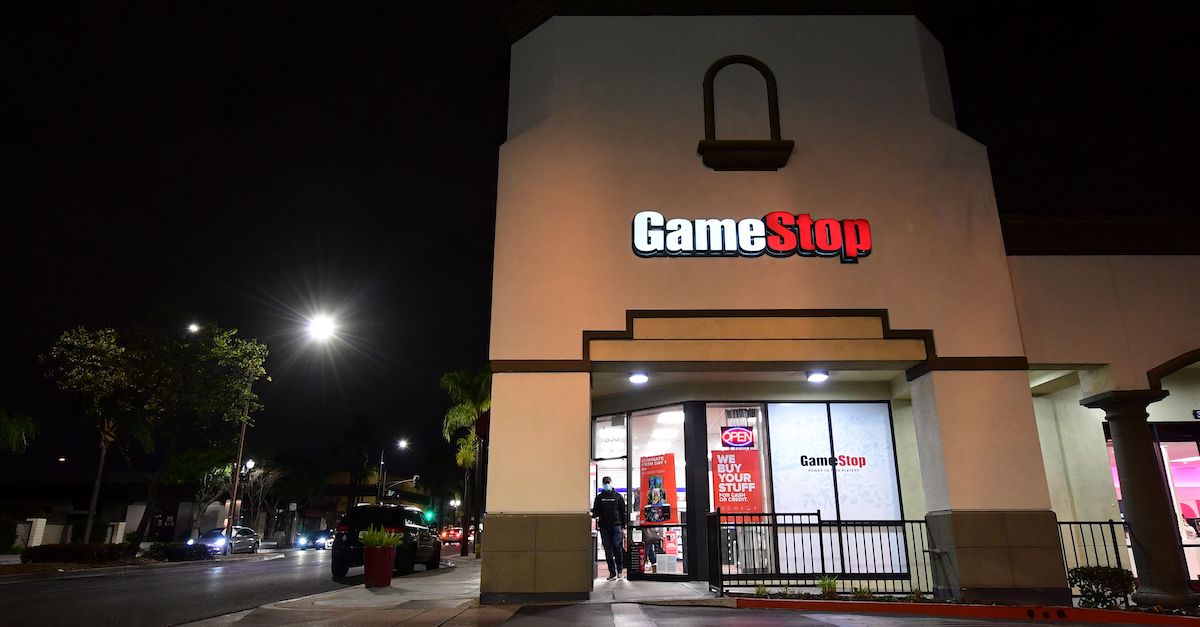 The ongoing saga surrounding the price of public shares of the retail video game store GameStop has attracted the increased attention of federal regulators with the Securities and Exchange Commission.

“The Commission is closely monitoring and evaluating the extreme price volatility of certain stocks’ trading prices over the past several days,” the SEC said in a Friday statement which almost certainly referenced GameStop and other stocks buoyed by the Reddit message board r/WallStreetBets.

“[E]xtreme stock price volatility has the potential to expose investors to rapid and severe losses and undermine market confidence,” the statement reads. “As always, the Commission will work to protect investors, to maintain fair, orderly, and efficient markets, and to facilitate capital formation.”

The statement said the SEC was working to “identify and pursue potential wrongdoing” by “closely review[ing] actions taken by regulated entities that may disadvantage investors or otherwise unduly inhibit their ability to trade certain securities.”

The SEC’s choice of words — including its reference to “manipulative” trading activity — suggests that many observers were correct about predictions that the SEC was likely mobilizing its regulatory efforts using market manipulation theories.

Duke Law School Prof. Gina-Gail S. Fletcher, who is described by her colleagues as an expert on market manipulation, spoke with Law&Crime at length about the possibility of regulatory success. She believes the SEC is likely fact-finding right now to see if anyone or any group of people broke the law. It’s hard to predict whether individual-specific litigation might be successful, she explained, without a clear record of exactly who said what — and when — in each Reddit board.  Plus, due to Reddit’s anonymity, regulators may have a difficult time identifying possible defendants even if they believe laws were broken.  (The New York Times has identified a former insurance financial educator, chartered financial analyst, and financial wellness educator named Keith Gill, 34, of New Hampshire and Massachusetts, as one of the major players.  The report identifies Gill as the Redditor known as “Roaring Kitty.”)

Even if potential defendants are identified, Fletcher said successful litigation against alleged individual market manipulators would be difficult for the SEC.  She cautioned that the average layperson’s definition of “manipulation” is not the same thing as “market manipulation” under federal securities law.  Put simply, a bunch of people posting online that they want to shoot a company’s stock to the moon is probably not illegal under the Securities Exchange Act of 1934, she explained.  And it certainly is not collusion.

Federal regulators with the SEC know this — even though GameStop’s stock price by most measures no longer reflects its fundamental value.

To effect, alone or with 1 or more other persons, a series of transactions in any security registered on a national securities exchange . . . creating actual or apparent active trading in such security, or raising or depressing the price of such security, for the purpose of inducing the purchase or sale of such security by others.

But that, Fletcher said, is still difficult to prove.

“I think they’re going to struggle with it, and that’s why their statements have been so bland,” she said with reference to the SEC’s pronouncements on Wednesday and Friday.  “They don’t really do a whole lot of market manipulation enforcement.  It’s a really hard crime to prove.  The statutory provisions and the case law related to it are all over the place, and they don’t favor the SEC.”

Among the issues is that market manipulation laws are in place under the general policy goal of protecting retail investors — in other words, day-to-date individual traders — from nefarious market activities they may not be savvy enough to spot.  “Here, it’s the retail investors who are doing the potential ‘manipulation,'” Fletcher said — raising an interesting question about whether the laws should be employed to protect GameStop traders from themselves.

Legislative intent aside, market manipulation laws also require the SEC to prove either (1) an actor’s intent to manipulate, or (2) an actor’s reckless conduct which caused manipulation.  That, Fletcher says, is also a difficult argument for the SEC to win in court.

“The SEC would have to show that [GameStop’s] price became artificial because of what was going on,” Fletcher said.  “That’s really, really difficult to prove.  Courts are looking for fraud, misstatements, misinformation in the market — and, as you consider what’s going on with GameStop, you have irrational exuberance but don’t seem to have a lot of fraud.”

In other words, GameStop traders are trading “with eyes wide open.”  That’s what makes this different from a standard pump-and-dump scheme, she said, or a scheme involving misinformation.

“The knowledge these trades have about the sock doesn’t indicate they’re being deceived,” she continued.  “It’s not inaccurate or fraudulent.”

Fletcher explained that courts generally look for conduct which reeks of “dirty hands.”  Here, she believes, there is not a lot of evidence of that — if any.

“Irrational exuberance” is a term Fletcher used frequently during the conversation.  She believes it’s a better term to describe what’s happening with GameStop.  The term was coined by former Federal Reserve Chairman Alan Greenspan during the dot com bubble.  It’s not illegal, and it’s a term not even found in the Securities Exchange Act.

“Based on what courts have said in the past, [GameStop’s] price is being driven by market transactions.  There are courts that would say the price is not artificial because the markets are setting the price” — not manipulative actors, Fletcher said.  “I think it would be a really hard care to make that someone is putting out misinformation.  Rather, it’s a lot of people who have a lot of irrational exuberance — and that’s causing the price to go up.”

As to GameStop, if the SEC “can say the sole purpose” of the trades or activity “was to manipulate the security, then it’s possible the SEC could bring some sort of open market manipulation claim,” she expounded.  However, any “defendant could say — ‘I bought this stock because I truly believed in GameStop.’  A defendant did that in another case and succeeded in beating the SEC.”  That, Fletcher opined, was a “super heavy burden for the SEC” to overcome in any enforcement action attempted against a facially legitimate transaction.

The GameStop rally is fueled by many Redditors who say they’re trying to prevent Wall Street firms from betting against the company’s success.

A typical market manipulation case, Fletcher said, involved “someone inside a company putting forward misinformation because they have their compensation tied to” the company’s stock price.  Due to SEC reporting requirements — the goal of which is to provide investors with accurate information — market manipulation is rare among large companies.  It’s more likely to happen with penny stocks sold by companies about which there is scant information.

The SEC’s best plan of attack, Fletcher said, would be to “find that person or that group of persons” responsible for the rally.  “If people pumped it up to profit and cash it out, then, yeah, I think that would be our best bet to find someone to hold liable for market manipulation.”  She noted that the SEC has broad access to transaction data.  But even then, she predicted the SEC would not have much success — based on the information that is available to her right now.

“The GameStop situation is crazy,” Fletcher said in general.  “I think it’ll be really interesting when all of this does crash, when the debris settles, how the retail investors feel about their foray into big finance and what the end result was.”

She said that if the pattern of behavior continues to other companies or commodities — stock in the movie theater chain AMC and silver as a commodity, for instance — “the SEC will have a really hard time not intervening in some meaningful way.  I don’t know what it would look like, but it might be a ‘halt trading’ or ‘stop trading’ order for these irrational stocks.  It is not sustainable for the SEC to not act if Reddit or some type of mass social media movement coalesces on a particular stock.  It will diminish investor confidence and lead some real investors to leave the market.”

She also predicted that the GameStop rally would “not have the result of burning down the system” — contrary to the wishes of some who have invested with hopes of democratizing the markets away from big hedge funds and toward individuals exercising the relatively newfound freedom to conduct zero-fee online trades.

“The SEC is going to crack down in ways that make everyone unhappy about the state of the market.  Or, the SEC won’t crack down, [and] people will be really, really unhappy they lost their life savings.”

The GameStop situation is poised to cause “a lot of hurt; it’s not sustainable,” Fletcher said in conclusion.  “Market volatility and exuberance like this hurts real people — not just hedge funds — examples being pension, retirement, college savings, and college endowments.  The losses to the hedge funds are not just their losses.  They’re spread out across the entire market.  The consequences undoubtedly will affect a larger number of people than these Redditors are thinking about.  The financial markets never operate in a silo.  The consequences — the fallout — are more volatile markets.  It will be more expensive for companies to raise capitol and make the markets look less attractive.  It will probably force people moreso into index funds or mutual funds” than into individual stocks if they expect long-term investments to pay off.