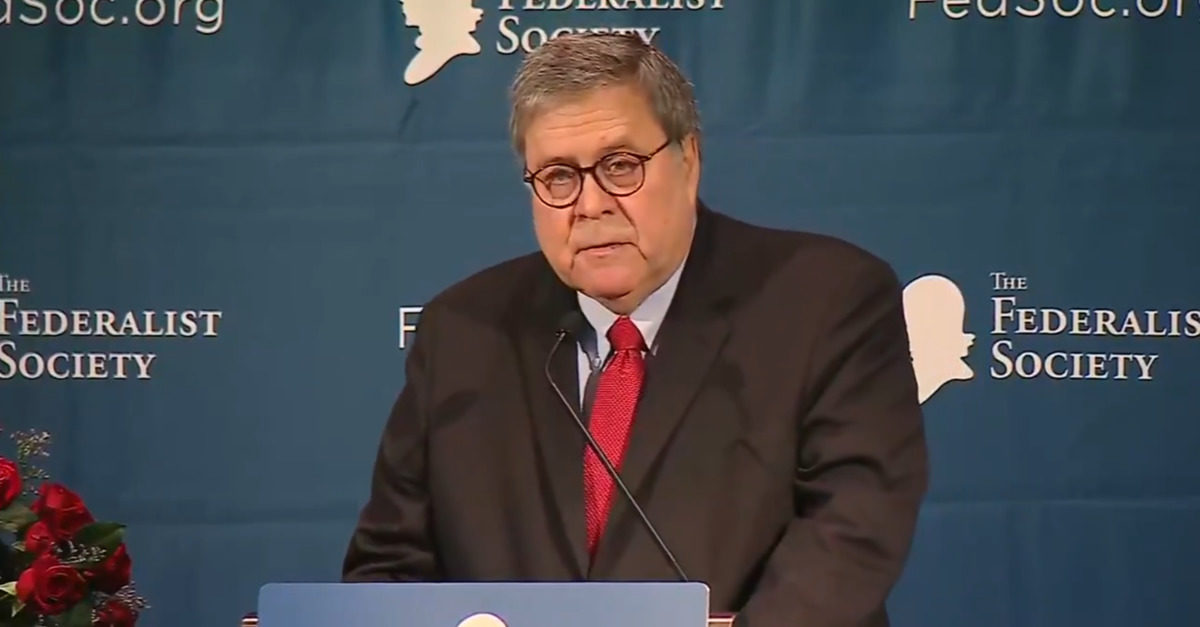 A group of 12 prominent conservative and libertarian attorneys on Friday released a statement denouncing Attorney General William Barr for promulgating an autocratically expansive view of executive power, which they say is unsupported by history and the U.S. Constitution.

The group was particularly concerned by Barr’s Federalist Society address earlier this month in which he upbraided “the left” and defended President Donald Trump, saying the Attorney General espoused a call to reform the U.S. government under an “autocratic vision of executive power.”

“In that speech, Barr rewrote history with the unsupported claim that his view of presidential power was shared by the Founders, and has been the dominant one throughout most of our history, only to come under attack during the past several decades. His assertion, enunciated in bold face in the text of his speech, is that ‘both the Legislative and the Judicial branches have been responsible for encroaching on the Presidency’s constitutional authority,’” the group wrote. “Barr’s view of history, including his claim that the Founders shared in any respect his vision of an unchecked president, and his assertion that this view was dominant until it came under attack from courts and congress a few decades ago, has no factual basis.”

Barr’s Federalist Society speech, which was in stark contrast to the historically apolitical independence of the Justice Department, was widely panned by legal experts and attorneys. Some even went so far as to call for Barr’s impeachment.

Checks and Balances didn’t restrict the scope of their apprehension to Barr’s recent comments, expressing deep-seated concern over his handling of the Mueller probe as well.

“We were also disturbed to read, when it became available for public review, the memorandum that Barr had submitted on June 8, 2018 to the Trump administration, before his appointment, laying out his views on the overall impropriety of the Mueller investigation as a whole, and explaining in detail Barr’s extremely expansive view of the character of Presidential powers,” they wrote. “It is clear to us that Barr’s views as enunciated in this memo are incongruous with settled notions of American government as one of checks and balances and shared powers among the three branches.”

This is not the first time Checks and Balances has spoken out against the Trump administration. The group issued a statement in October rebuking President Trump for exhibiting behavior “fundamentally incompatible with the president’s oath of office,” and urging Congress to pursue an “expeditious impeachment investigation.”

The aforementioned George Conway, Daily Trump critic, is one of the group’s co-founders.