Rep. Devin Nunes Threatens Yet Another Lawsuit in Response to Media Reports About Him 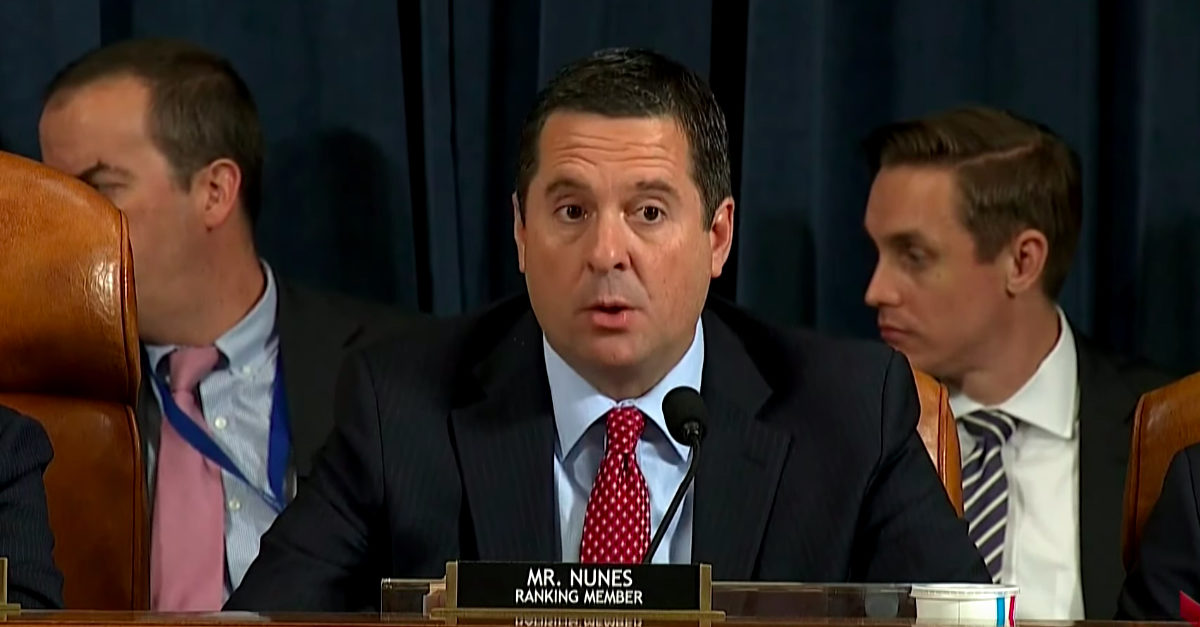 During last week’s public hearings, Rep. Devin Nunes (R-Calif.) showed his unwavering support for President Donald Trump by passionately and repeatedly denouncing the proceedings against Trump as nothing more than a “witch hunt.” But in addition to parroting that catchphrase, the Trump acolyte and Ranking Member of the House Intelligence Committee has also quickly taken to the president’s penchant for threatening lawsuits that have a snowball’s chance.

In 2019 alone, Nunes has sued: people accusing him of being a “fake farmer”; a journalist he accused of writing a “click-bait” story about him; Twitter and a fake cow. Thus, it came as no surprise when, in response to reports from the Daily Beast and CNN claiming the congressman secretly met with a former Ukrainian official in 2018 to obtain dirt on former Vice President Joe Biden, Nunes promptly threatened to sue both news outlets.

The stories both allege that Nunes employed the help of recently indicted Rudy Giuliani associate Lev Parnas to arrange a meeting with Ukraine’s former Prosecutor General Victor Shokin, the prosecutor bragged about getting fired. The sources for the news stories were attorneys Joseph Bondy and Ed MacMahon, both of whom represent Parnas as the businessman fights allegations that he and his associate Igor Fruman illegally funneled foreign money to U.S. candidates in violation of federal election laws.

Nunes on Friday told Breitbart that he planned on filing defamations lawsuits against both news outlets, calling the stories “demonstrably false.” However, it should be noted that Nunes failed to specify or refute any particular factual allegations as being incorrect. Instead, he broadly claimed that the outlets were fooled by an obvious political smear.

“These demonstrably false and scandalous stories published by the Daily Beast and CNN are the perfect example of defamation and reckless disregard for the truth,” Nunes said late Friday night. “Some political operative offered these fake stories to at least five different media outlets before finding someone irresponsible enough to publish them. I look forward to prosecuting these cases, including the media outlets, as well as the sources of their fake stories, to the fullest extent of the law. I intend to hold the Daily Beast and CNN accountable for their actions. They will find themselves in court soon after Thanksgiving.”

Under the legal standard for proving defamation Nunes, a public figure, would be required to show not only that the stories published by CNN and The Daily Beast were false, but that the outlets acted with “actual malice,” meaning they knew the story was false or acted with reckless disregard for the statement’s veracity. That would be almost impossible, as both outlets reported on statements from Parnas’s attorneys and did not make any claims regarding the truth of those statements.

It’s also notable that Nunes refused to provide any comment to CNN when he was asked to respond the claims.

“I don’t talk to you in this lifetime or the next lifetime,” Nunes said. The Daily Beast also said a spokesperson for Nunes declined to comment.

Rep. Adam Smith (D-WA) said on Saturday that an ethics investigation into Nunes based on the reports was “quite likely.”