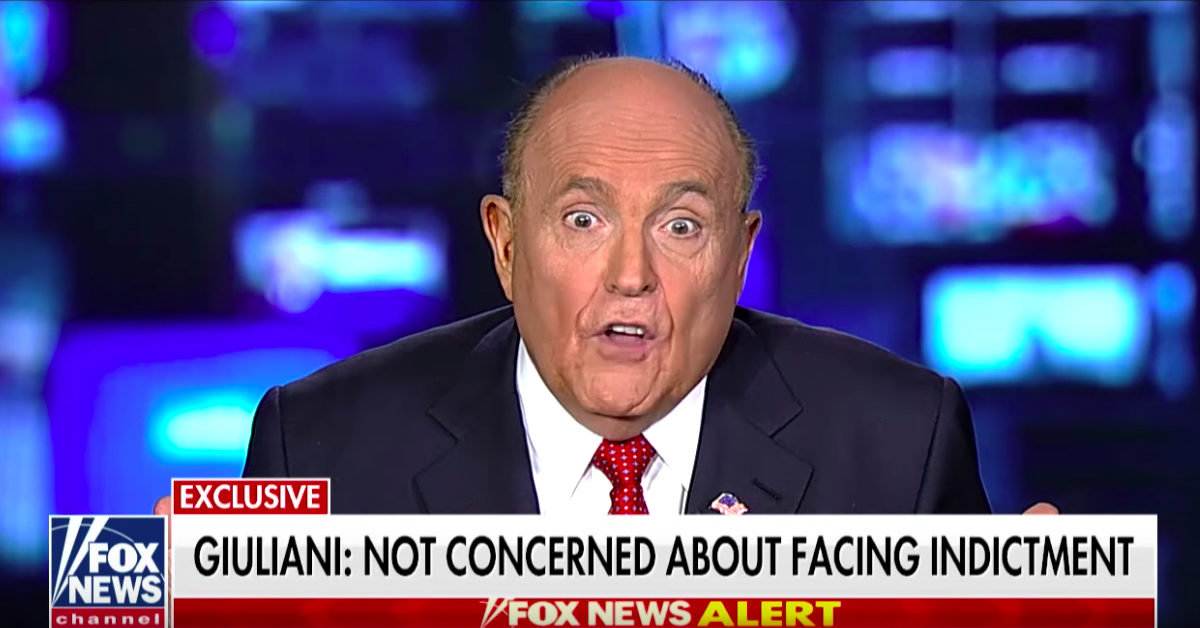 Rudy Giuliani’s legal woes are continuing to worsen at an astronomical rate. Amid reports this week that federal prosecutors have expanded the scope of their investigation into his foreign business dealings, the President’s personal attorney made a guest appearance on Fox News this weekend where he defended his conduct and offhandedly threatened to blackmail his client, President Donald Trump.

Appearing on “America’s News GQ” Saturday morning, Giuliani said that despite widespread reports of his impending legal peril, he was not the least bit worried about the prospect of being indicted.

Asked by host Ed Henry whether he’d spoken to President Trump about the investigation into his foreign business deals, Giuliani provided a distressing response. (The relevant comments begin about the 10-minute mark)

“I do not discuss conversations with my client. You can assume that I talk to him early and often and have a very very good relationship with him,” Giuliani said of Trump.

“And all of these comments – which are totally insulting – I’ve seen things written like, ‘he’s gonna throw me under the bus.’ When they say that, I say, ‘he isn’t, but I have insurance.’”

The former New York City mayor added that such allegations were “ridiculous,” stating that he and the President remain “very good friends” before claiming the existence of a conspiracy to frame Trump that dated back to President Barack Obama’s White House.

“So…[Rudy Giuliani] is extorting [the President] to make sure Trump doesn’t throw Rudy under the bus for shaking down Ukraine to get dirt for a political campaign,” former federal prosecutor and CNN legal analyst Mimi Rocah said of Giuliani’s “insurance” statement.

So…. @RudyGiuliani is extorting @realDonaldTrump to make sure Trump doesn’t throw Rudy under the bus for shaking down Ukraine to get dirt for a political campaign. Got it. https://t.co/BhAyc3ak2y

Legal analyst Renato Mariotti, also a former federal prosecutor, said Giuliani’s threat to release negative information about his client was “totally unethical,” but noted that such unscrupulous behavior had become commonplace for Giuliani.

What “insurance” does Giuliani have on Trump?

It’s totally unethical for a lawyer to suggest that he has negative information about a client, or threaten to release it, but Giuliani has flaunted his professional responsibility for some time. https://t.co/YHuzdmleha

Georgetown University Law Center professor Marty Lederman used the occasion as a teaching moment, saying Giuliani’s appearance was an ideal example in in how an attorney should not act, particularly highlighting that it’s “not a great idea” for an attorney “to publicly blackmail your client.”

Law students, take note: It's not a great idea for an attorney (i) to repeatedly tweet in a way ("I was only acting for my client") that undermines your client's interests, nor (ii) to publicly blackmail your client w/insinuations that you have info that would harm him. https://t.co/EPHExZIntc

Berkley professor Orin Kerr said “when lawyers talking about insurance from clients just meant malpractice insurance,” adding, “but it doesn’t sound like that’s what Rudy has in mind.”

I remember when lawyers talking about insurance from clients just meant malpractice insurance, but it doesn’t sound like that’s what Rudy has in mind. https://t.co/5Kc9buZ7ZM

In fact, Giuliani had made a similar claim about having “insurance” to protect him earlier this month, however, in that instance he and his personal attorney qualified the comment as joke pertaining to health insurance.

But, as New York University Law professor Ryan Goodman noted, even if he was joking the question then becomes “whether Giuliani is sending a subtle message since he’s now repeated this at least twice and, if he’s sensible, may know how it will be interpreted in some quarters.”

Here’s the link to the Nov 14 interview.

(One question, I suppose, is whether Giuliani is sending a subtle message since he’s now repeated this at least twice and, if he’s sensible, may know how it will be interpreted in some quarters.)https://t.co/xRW6A6ny0Z

In a bizarre response to the backlash, Giuliani said the comments were “sarcastic,” and made in relation to “files in my safe” about the Biden family, which would be released if Giuliani were ever to disappear.

The statement I’ve made several times of having an insurance policy, if thrown under bus, is sarcastic & relates to the files in my safe about the Biden Family’s 4 decade monetizing of his office.

If I disappear, it will appear immediately along with my RICO chart.