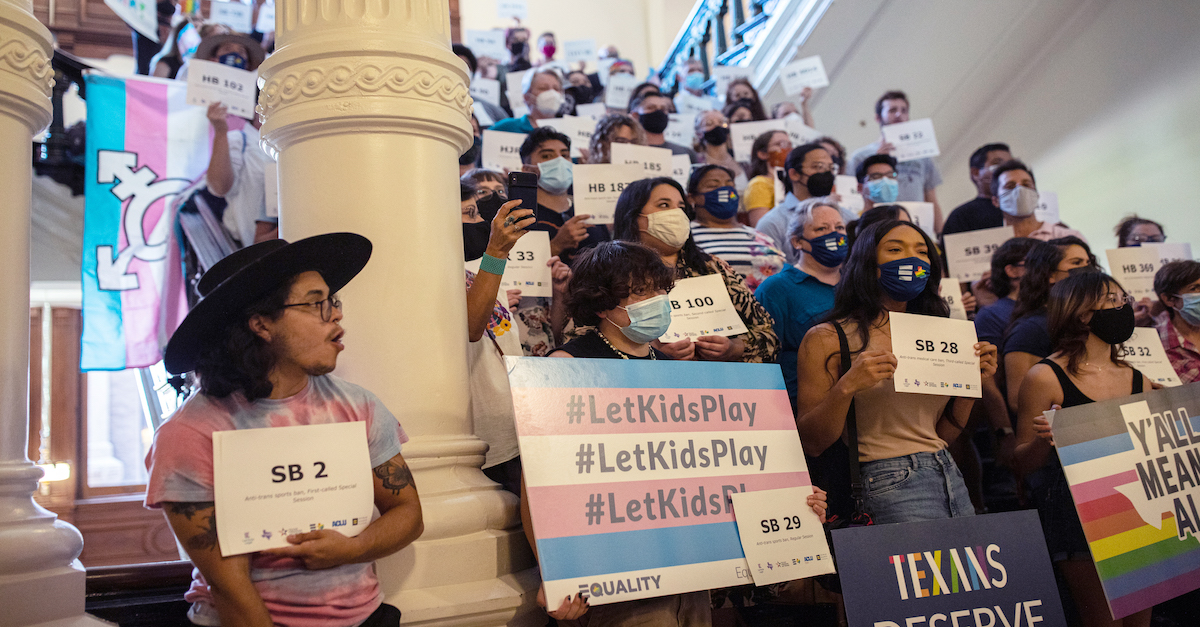 LGBTQ rights supporters gather at the Texas State Capitol to protest state Republican-led efforts to pass legislation that would restrict the participation of transgender student athletes on the first day of the 87th Legislature’s third special session on September 20, 2021 in Austin, Texas.

A middle school math teacher in Kansas has sued the school district where she has worked for decades, accusing administrators of violating her constitutional rights by requiring that she address students by their preferred pronouns.

Pamela Ricard says that the decision by the Geary County Schools Unified School District and the principal of Fort Riley Middle School, where she has taught since 2005, to suspend and reprimand her for refusing to address a student by their preferred pronouns violated her First Amendment rights.

The lawsuit arises out of a series of interactions in March and April 2021, when Ricard repeatedly declined requests to call a student by their preferred name and pronouns instead of what was listed as their enrolled or legal name.

Ricard had been advised by the school principal, Shannon Molt, who is named as a defendant in the lawsuit, and other school employees and administrators that a “Student 1” requested to go by a preferred name which was different from the gender of the student’s enrolled name.

Another student, identified as “Student 2” in the complaint, also notified Ricard in a note that “Student 1” had changed their name and pronouns.

“I don’t know if Mr. lubbers has emailed you about [Student 1’s Alternative First Name]’s ([Student 1 Legal First Name]) preferred name and pronouns and im assuming since you said ‘miss [Student 1 Legal Last Name]’ to him in class he has yet to do so, unless he has and youre purposely misgendering/deadnaming him on purpose, which I don’t think you would do that purposely but there’s always a possibility,” the note from Student 1 said. “Anyways, His preferred name is [Student 1 Preferred Alternative First Name] and his pronouns are He/Him.”

Ricard didn’t change how she addressed the student. Nor did she change after Student 2 left a second note that read:

[Student 1 Last Name]’s name is [Student 1 Preferred Alternative First Name] btw, his pronouns are He/Him & if you cant act like an Adult [sic] & respect him & his pronouns then prepare yourself to deal with his mother since you cant be a decent human being and respect him. All youre doing right now is showing that youre [sic] transphobic & don’t care that youre [sic] being visibly transphobic. – [Student 2 Preferred Alternative First Name] [Student 2 Legal Last Name] (my pronouns are he/they btw).

After a disciplinary hearing, Ricard was suspended for three days. She appealed, and her request for a “religious accommodation” was denied.

According to Ricard, her Christian beliefs prevent her from accepting that student’s request.

Ms. Ricard is a Christian and holds sincere religious beliefs consistent with the traditional Christian and biblical understanding of the human person and biological sex. Ms. Ricard believes that God created human beings as either male or female, that this sex is fixed in each person from the moment of conception, and that it cannot be changed, regardless of an individual person’s feelings, desires, or preferences. Any policy that requires Ms. Ricard to refer to a student by a gendered, non-binary, or plural pronoun (e.g., he/him, she/her, they/them, zhe/zher, etc.) or salutation (Mr., Miss, Ms.) or other gendered language that is different from the student’s biological sex actively violates Ms. Ricard’s religious beliefs.

In her complaint, Ricard implies that addressing a student by their preferred name and pronouns would subject her to the whims of capricious children who have an “infinite” number of options to change their gender identity on a daily basis, apparently.

“Under District policies, all teachers must now refer to each student—both in and out of class—using whatever names or pronouns the student claims reflect his or her particular gender identity on any given day,” Ricard’s complaint says.

Ricard implies that requiring her to cooperate with the district’s policy would just be too overwhelming and says the matter of gender identity is part of the culture wars.

“The District now demands this of Ms. Ricard even though the concept of gender identity is entirely subjective and fluid, even though the number of potential gender identities is infinite (with ever expanding options currently available), and even though the number of potential pronouns has likewise exponentially multiplied in recent years—all for the purpose of lending credence to cultural ideas Ms. Ricard does not share or wish to advance that are contrary to her core religious beliefs,” the complaint says.

As if for good measure, Ricard also notes in her complaint that she disagrees with allowing students to use restrooms that align with their gender identity, even though her case isn’t actually about any so-called “bathroom bill.”

“Ms. Ricard also believes, based on scientific evidence, that scientifically demonstrable and anatomically-correct designations of sex should control access to shared public-school restrooms and locker rooms for minors,” the complaint says. “For those students who are not comfortable using facilities associated with their anatomical sex, Ms. Ricard supports those students having access to and using a private restroom or locker space.”

Other elementary school teachers who, like Ricard, say their religious beliefs prevent them from calling a student by their preferred name and pronouns, have been somewhat successful in similar lawsuits. A Virginia elementary teacher and football coach was reinstated after initially being fired for opposing a school board policy allowing students to use their preferred pronouns. Another Virginia case, this time from a high school French teacher who refused to call a student by their preferred pronouns, is currently pending before the state supreme court.

A federal appeals court ruled in 2021 that college professors may have stronger “free-speech rights” when they are teaching.

Ricard’s lawsuit, filed on March 7, comes as laws targeting transgender youth and students and their families in multiple states are either being passed or challenged. Florida’s so-called “Don’t Say Gay” bill, currently before Gov. Ron DeSantis (R), would prohibit discussion of sexual orientation and gender identity in schools from kindergarten through third grade. In Texas, an executive order from Republican Gov. Greg Abbott classifies certain forms of treatment for transgender youth as “child abuse,” and a proposed Idaho law would make gender-affirming treatment for transgender minors punishable by life in prison.