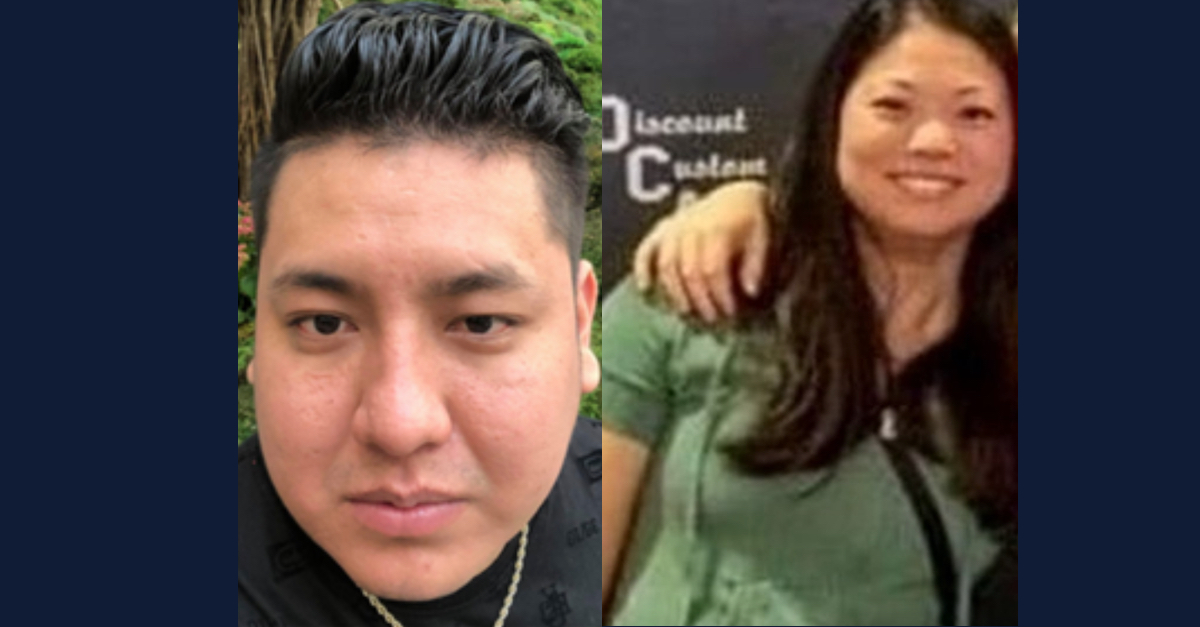 A Virginia man has been charged with the murder of a woman whose body has not yet been found. And, as of now, neither has the suspect.

Joel Mosso Merino, 27, is currently wanted by law enforcement in Fairfax County, throughout the Old Dominion and nationally.

Police in the jurisdiction that issued the two warrants for his arrest insist their suspect is on the lam after allegedly killing 35-year-old Hannah Choi and hiding her body earlier this month. The presumed victim was last seen alive on the morning of March 5, 2022.

Choi hails from Alexandria, Va., near the census-designated place of Kingstowne in the broader metropolitan area. After being last seen at home, she was reported missing the next day by her friends when she missed several appointments and could not be contacted.

“Hannah Choi,” Fairfax County Police Department Bureau Chief for Major Crimes Major Ed O’Carroll recently mused in comments reported by Washington, D.C.-based ABC affiliate WJLA. “A bright, caring, amazing young woman with the world at her reach. She was the victim of violence. A victim of murder. And we know the suspect.”

“We have evidence and details that make us believe, firmly believe, without any doubt, that she’s deceased,” he continued during a Tuesday press conference. “This is tragic. My deepest condolences to Hannah’s family, friends, and our community. We are committed to finding Hannah and finding her killer.”

According to O’Carroll, police have “mounting, compelling evidence” that leads them to believe Merino killed Choi at the house where they both lived and then went on to dispose of her body in Maryland’s Piscataway Park, Washington, D.C.-based CBS affiliate WUSA reports.

Officers first responded to the house for a wellness check, O’Carroll said, noting almost everything “appeared generally to be in order.”

Except for one apparently tell-tale aberration: bedding that was allegedly missing from one of the bedrooms. Police say their investigation suggests Merino and Choi would go on to have an argument on the Saturday night she is believed to have been killed. That theory, police say, is based on video evidence of the two together, as well as interviews with family, friends, and neighbors.

O’Carroll said detectives also discovered a car linked to Merino in the federal district. After a search of that car, police issued warrants for murder in the second degree and felony disposal of a body.

Fairfax Police Chief Kevin Davis said investigators obtained an “abundance of probable cause” before charging Merino while also noting the somewhat atypical nature of their case against him.

“This is a murder warrant without the recovery of our victim yet,” he said. “That’s unusual in this profession.”

Police believe that sometime during the argument or afterwards, Choi was “significantly” injured, prompting the suspect to remove her body from the home and take it to the park in question. Search crews have been canvassing that location in Prince George’s County, Md. for days with no luck but are likely to resume their work there.

The believed-to-be deceased woman’s family is perplexed at why such a thing could happen to someone like her.

“She tried so hard to help people and he must have known that,” her younger sister Minna Choi said. “Just you know there’s no reason for any kind of violence like that and also why in the world did he have to dispose of her body and not let the family have a little closure. I just ask that he would at least let us know where she is so we can put her to rest and have her be at peace.”

Police believe Merino is no longer in Virginia, that he initially traveled south to Georgia, and is likely already in another state.

U.S. Marshals are also currently looking for the suspect.

A wanted poster describes him as 5-foot-7 and 230 pounds.

Detectives are asking anyone who may have information about Choi’s disappearance or knowledge of Merino’s whereabouts to contact them at 703-246-7800, option 2. Tips can also be submitted anonymously through Crime Solvers by phone (866-411-8477), by text – (type “FCCS” plus tip to 847411) or online.