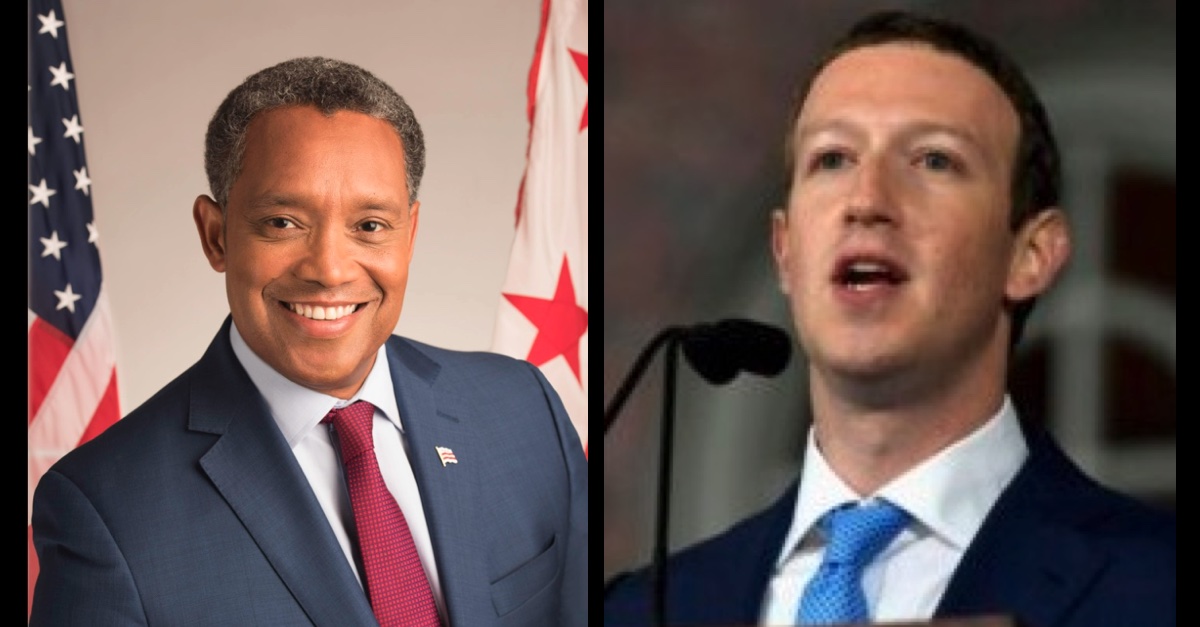 The attorney general for the District of Columbia has announced that he is naming Mark Zuckerberg as a defendant in the district’s lawsuit against Facebook.

Karl Racine made the announcement Wednesday, saying that Zuckerberg had knowledge of decisions that led to the exposure of Facebook user data.

“Based on the evidence we gathered in this case over the past two years and the District’s investigation more generally, it’s clear Mr. Zuckerberg knowingly and actively participated in each decision that led to Cambridge Analytica’s mass collection of Facebook user data, and Facebook’s misrepresentations to users about how secure their data was,” Racine said in a statement to Law & Crime. “The evidence further demonstrates that Mr. Zuckerberg also participated in misleading the public and government officials about Facebook’s role. Under these circumstances, Mr. Zuckerberg should be held liable for his involvement in the decisions that enabled the exposure of millions of users’ data – and that’s why we’re adding him to our complaint.”

“Protecting the Data of Half of the District’s Residents”

It’s the first time a U.S. regulator, including an attorneys general office, specifically named Zuckerberg in a complaint, according to Racine’s office.

“My office filed our lawsuit in 2018, and since then, we’ve reviewed hundreds of thousands of pages of documents produced in litigation and completed a wide range of depositions including former employees and whistleblowers,” Racine said on Twitter. “This lawsuit is about protecting the data of half of all District residents and tens of millions of people across the country. We’ve taken our obligation to investigate wrongdoing very seriously—and Facebook should take its responsibility to protect users just as seriously.”

BREAKING: I just added Mark Zuckerberg as a defendant in my lawsuit against Facebook.

Our continuing investigation revealed that he was personally involved in decisions related to Cambridge Analytica and Facebook’s failure to protect user data.

My office filed our lawsuit in 2018, and since then, we’ve reviewed hundreds of thousands of pages of documents produced in litigation and completed a wide range of depositions including former employees and whistleblowers.

This lawsuit is about protecting the data of half of all District residents and tens of millions of people across the country.

We’ve taken our obligation to investigate wrongdoing very seriously—and Facebook should take its responsibility to protect users just as seriously.

“These allegations are as meritless today as they were more than three years ago, when the District filed its complaint,” a Facebook company spokesperson told Law&Crime in an email. “We will continue to defend ourselves vigorously and focus on the facts.”

Racine’s effort to add Zuckerberg as a defendant is “one of the first efforts by a regulator to expose him personally to potential financial and other penalties,” the New York Times reported.

Racine sued Facebook in 2018, accusing the social media giant failing to protect the privacy of tens of millions of users–including more than 340,000 D.C. residents–and misleading them as to how safe their data actually was.

According to the lawsuit, Facebook allowed users’ data to be sold to Cambridge Analytica, a London-based consulting firm, without their knowledge and consent. The company also allegedly misled users as to how safe their data was and failed to mitigate the damage once it discovered that the data had been improperly sold.

The proposed first amended complaint — included as an exhibit to the attorney general’s motion to add Zuckerberg as a defendant — now begins with an epic account of Facebook’s meteoric rise.

“In under two decades, Facebook has grown from a small online social network to an implacable corporate giant, larger than any single country—with more than 2.9 billion monthly active users, nearly half the global population,” the amended complaint states. “To put that in perspective, Facebook has more users than the populations of the United States, China and Brazil combined. And Facebook has become wealthier than over 150 countries worldwide, including Switzerland, Sweden, and the UAE.”

For Racine, Facebook building a platform that is “stickier”—in terms of user retention—has come with toxic repercussions.

“What this means is that the more Zuckerberg’s Facebook stokes divisiveness and polarization, destabilizes democracies, amplifies genocides, and impacts users’ mental health, the more money Facebook and its leaders make,” the amended complaint says.

As reported by the New York Times in 2018, the firm harvested private information from the Facebook profiles of more than 50 million users without their permission, a statistic the paper attributed to former Cambridge employees, associates and documents.

“More Than Half the Total Votes During the 2016 Presidential Elections”

“In other words, and this cannot be overstated, Cambridge Analytica used the Facebook’s platform—in a way that Facebook and Zuckerberg encouraged—to influence and manipulate the outcome of a United States presidential election,” the amended complaint states. “The personal data of the more than 70 million US. Facebook users that Cambridge Analytica used to manipulate the election accounted for more than half the total votes during the 2016 presidential elections, in an election that was effectively decided by just a few hundred thousand people.”

The scandal led to a major fallout for both Cambridge Analytica and Facebook.

Cambridge Analytica shut down under a cloud of controversy in May 2018.

Zuckerburg testified before Congress in April 2018 about the privacy breach, and in July 2019, the Federal Trade Commission imposed a $5 billion fine on Facebook—the largest ever imposed on a company for violating consumers’ privacy—for “deceiving users about their ability to control the privacy of their personal information.”

“While Facebook has, a full three years later, publicly condemned Cambridge Analytica’s data collection, its condemnation, in reality, only demonstrates that what Zuckerberg and Facebook say publicly is part of an intentional plan to mask the devastating consequences of their actions (or inactions),” the amended complaint states.

As a defendant in the D.C. case, Zuckerberg could face financial penalties, including up to $5,000 for any of the district’s residents who may have been affected by the Cambridge Analytica data privacy violation, the Times reported.

You can read the motion to add Zuckerberg as a defendant, and the district’s amended complaint, below.