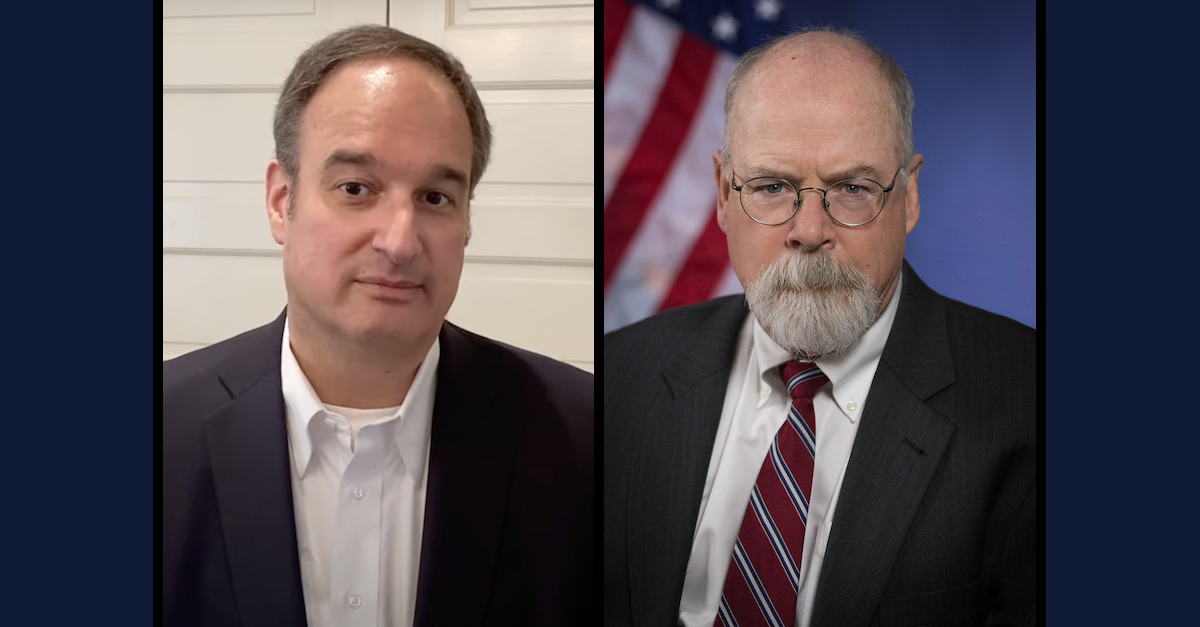 Special counsel John Durham on Thursday replied to a motion to dismiss an indictment by defendant Michael A. Sussmann, a former Hillary Clinton 2016 campaign lawyer from the firm Perkins Coie. Sussmann is accused of a single count of making a false statement to the government about the identity of his client(s) when making a tip to the FBI about Donald Trump. The most recent Durham filing, at its core, asks a judge not to spike portions of an earlier document that resulted in significant attention by commentators, analysts, and journalists over the last week.

As Law&Crime previously reported, Durham on Friday, Feb. 11, filed a motion that asked a federal judge to probe the ethics of Sussmann’s current defense counsel. Trump and others who support the ex-president claimed the motion contained proof that Clinton supporters had “spied” on Trump’s campaign; however, Durham’s Feb. 11 motion itself does not contain any derivation of the words “spy” or even the much-parroted word “infiltrate.” Instead, the allegedly anti-Trump data was “exploited” by pro-Clinton people, Durham’s team wrote in that much-ballyhooed Feb. 11 document.  The distinction may prove to be highly legally relevant, as it may portend the difference between illegal conduct and conduct that is entirely on the up-and-up. Or, put another way, the alleged conduct might look bad or even be loathed in some echelons (including, naturally, among MAGA faithful), but that doesn’t necessarily make it illegal conduct.

Sussmann on Thursday filed a motion to dismiss the indictment.

“Sussmann did not make any false statement to the FBI,” the introduction to that defense argument states.

And, even if Sussmann did lie, the allegedly offending statement to which Durham has pointed wasn’t “material” to the matter at hand, the Sussmann document further argues.  If the statement wasn’t “material,” the document argues that Durham’s single-count prosecution of Sussman fails as a matter of law.

Sussmann’s team and also asked the court to strike six paragraphs of the Feb. 11 document which led to the heated debate about where, precisely, Durham was going.

Durham’s team responded almost immediately with a four-page reply. The reply urged the court not to strike any material from the Feb. 11 motion.

“As an initial matter, defense counsel has presumed the Government’s bad faith and asserts that the Special Counsel’s Office intentionally sought to politicize this case, inflame media coverage, and taint the jury pool,” Durham’s team wrote. “That is simply not true.”

The Government included two paragraphs of limited additional factual detail in its Motion for valid and straightforward reasons. First, those paragraphs reflect conduct that is intertwined with, and part of, events that are central to proving the defendant’s alleged criminal conduct. Second, the Government included these paragraphs to apprise the Court of the factual basis for one of the potential conflicts described in the Government’s Motion, namely, that a member of the defense team was working for the Executive Office of the President of the United States (“EOP”) during relevant events that involved the EOP. If third parties or members of the media have overstated, understated, or otherwise misinterpreted facts contained in the Government’s Motion, that does not in any way undermine the valid reasons for the Government’s inclusion of this information.

Why? Durham’s team promises more. Much more. The team said it “intends to file motions in limine in which it will further discuss these and other pertinent facts to explain why they constitute relevant and admissible evidence at trial.”

Motions in limine are pretrial motions which attempt to sort out evidence issues well before a jury is seated.

“Pursuant to caselaw and common practice in this and other districts, the filing of documents containing reference to such evidence on the public docket is appropriate and proper, even in high- profile cases where the potential exists that such facts could garner media attention,” Durham’s team continued. “Moreover, any potential prejudice or jury taint arising from such media attention can effectively and appropriately be addressed through the voir dire process during jury selection.”

What followed were citations to news reports and court decisions about the prosecutions of former Trump campaign manager Paul Manafort and Roger Stone — both of whom received pardons from Trump during the waning days of the Trump presidency — among a few others.

Durham’s team then promised to make any filings under seal that could result in “the disclosure of witness identities,” affect “the safety of individuals,” or implicate “ongoing law enforcement or national security concerns.”  In other words, such filings would be hidden from the public.

The judge has yet to rule on the issue of whether or not to strike part of the Feb. 11 motion. Of course, such a ruling would be moot in the court of public opinion, since the Feb. 11 motion has been widely reported and read.

[Image of Sussmann via YouTube screengrab; image of Durham via DOJ portrait.]