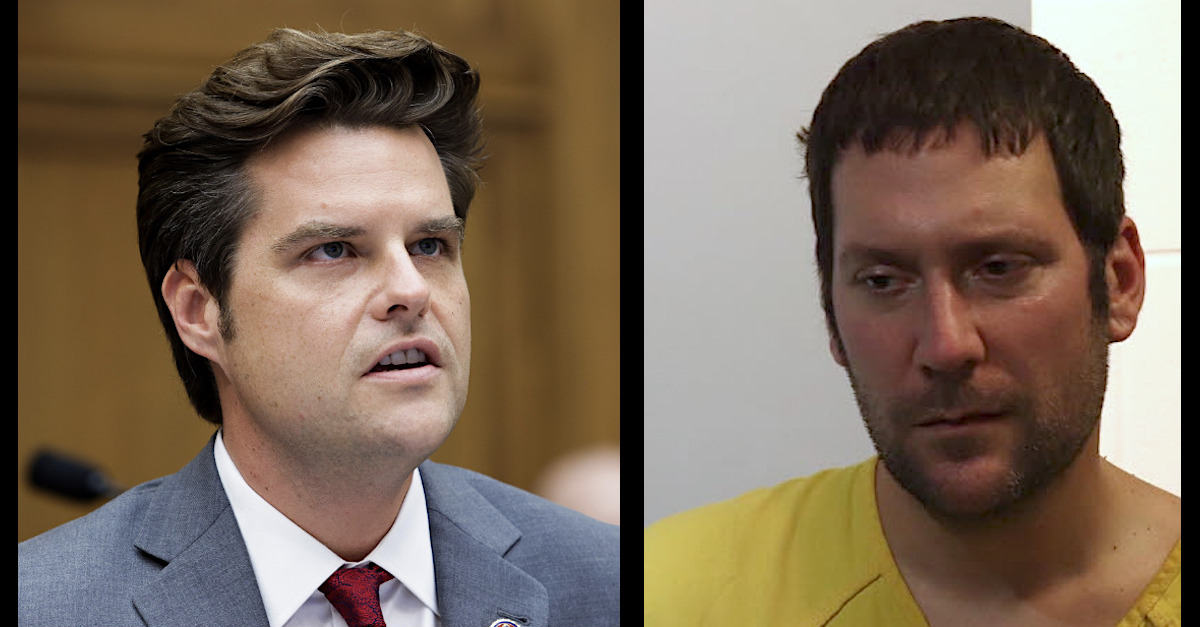 Joel Greenberg, the former Florida tax collector who is facing a 33-count federal indictment alleging sex trafficking and various financial crimes, is poised to plead guilty. That’s according to court records on file with the Orlando Division of the U.S. District Court for the Middle District of Florida. Greenberg’s attorney says his client’s friend, Rep. Matt Gaetz (R-Fla. 1), should be nervous about Greenberg’s planned guilty plea and its potential ramifications for Gaetz himself. That’s because guilty pleas of the magnitude being considered in Greenberg’s case frequently involve testimony against alleged co-conspirators.

Reports by The New York Times and others have suggested Gaetz is also under investigation to determine whether he engaged in sex trafficking. Gaetz has denied all wrongdoing and has said he is the victim of an extortion scheme.

“Should a change of plea not occur, the parties agree to a July 2021 trial,” the document adds as contingent.

Outside court, Greenberg’s attorney danced around questions about Gaetz’s legal jeopardy but then issued a rather blunt prediction on what he believed was to come.

“Does Matt Gaetz have anything to worry about?” asked a reporter.

“Does Matt Gaetz . . . that is such a broad . . . does he have anything to worry about?” Greenberg’s attorney Fritz Scheller pondered. “And you’re asking me to get into the mind of Matt Gaetz . . . ”

Scheller trailed off in thought; reporters tried to steer him back on track by asking him what he thought Gaetz should be thinking.

Scheller trailed off again before issuing what sounded like a much more affirmative supposition surrounding Gaetz’s legal jeopardy.

“I am sure Matt Gaetz is not feeling very comfortable today.” — Fritz Scheller, attorney for Joel Greenberg, associate of Rep. Matt Gaetz (R-FL)

(Greenberg is expected to take a plea deal with federal prosecutors in his own criminal case.) pic.twitter.com/Bz1PLWBuv4

“Did your client introduce Matt Gaetz to any underaged girls for sexual relations?” a reporter also asked.

Greenberg’s attorney said he would have to “ignore that question.”

“I apologize, I just can’t answer that question,” Scheller repeated. He then engaged in some banter about the positions of the reporters assembled around him.

Reporter: “Did your client introduce Matt Gaetz to any underaged girls for sexual relations?”

When asked if Greenberg considered Gaetz a friend, Scheller said, generally speaking, he tells his clients not to talk to “other potential co-defendants.”

Scheller then said he had “a lot of explaining to do” with his wife when she answered a call about the case.

Ok, one more, this is worth it. pic.twitter.com/Uf1jFrrtR1

“If Greenberg is signing a cooperation agreement, it means he has information that can help the government prosecute other people,” said attorney Daniel Goldman, a former federal prosecutor who was counsel to the Democrats during one of the impeachment proceedings against Donald Trump. “Usually prosecutors don’t cooperate ‘down’ (ie prostitutes) but look to cooperate ‘up’ against bigger fish (ie Gaetz).”

If Greenberg is signing a cooperation agreement, it means he has information that can help the government prosecute other people. Usually prosecutors don’t cooperate “down” (ie prostitutes) but look to cooperate “up” against bigger fish (ie Gaetz). This is bad for Gaetz.

Federal prosecutor Roger Handberg said during the hearing that the government believed the case would end with a plea deal, Politico reported. Scheller agreed. But while Handberg hoped the deal would be “done this month,” Scheller said he believed it was not “realistic” to believe the terms of the deal could be reached on the state’s timetable.

The reason, Scheller said, was because plea deals of the nature said to be contemplated in Greenberg’s case require approval from high officials within the Department of Justice. Scheller also said plea talks had been ongoing for “at least a month,” Politico noted.

U.S. District Judge Gregory A. Presnell said he expected to hear from both sides by May 15 at the latest whether Greenberg’s case would be resolved by a plea or whether a trial would be necessary.

Gaetz has not been charged.