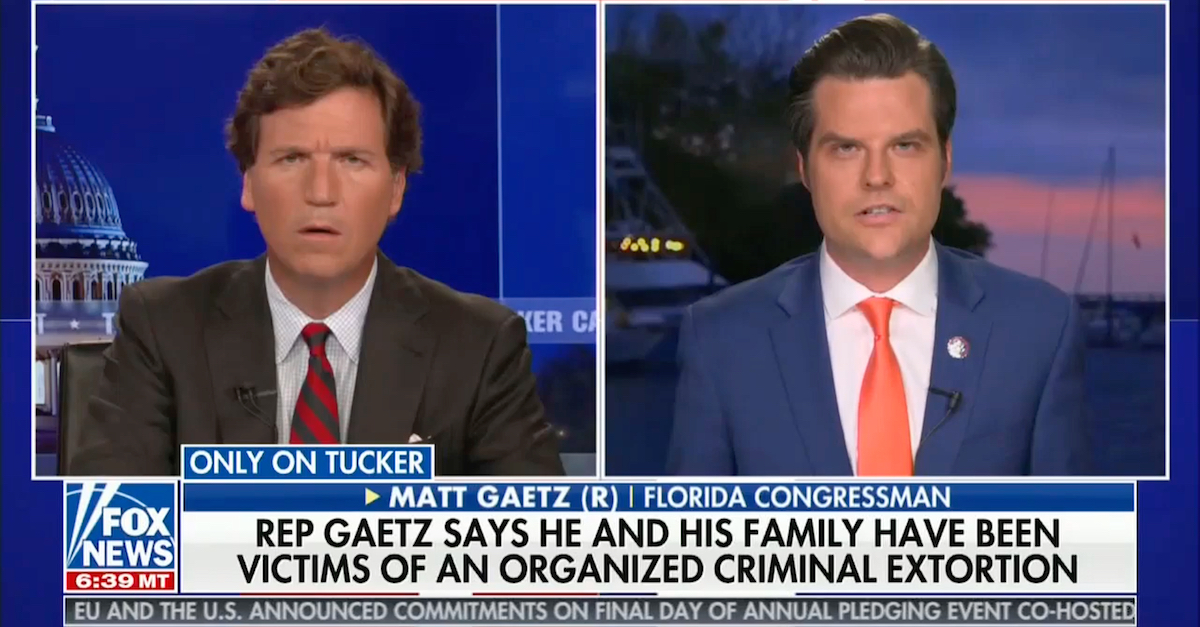 The Florida law firm which employs an attorney who was targeted by Rep. Matt Gaetz (R) on a recent Fox News broadcast released a statement Wednesday afternoon rubbishing Gaetz’s criticism of the attorney as “false and defamatory.”

Gaetz alleged that he was the victim of an “organized criminal extortion scheme” in a series of Tuesday tweets and in a subsequent Tuesday evening appearance on Fox News’ Tucker Carlson Tonight. Both the tweets and the appearance followed bombshell New York Times and Axios reports which indicated Gaetz was being investigated by the U.S. Department of Justice to determine whether the Florida representative paid a 17-year-old girl to travel with him while he was engaged in a sexual relationship with the teen. The DOJ probe sought to determine whether Gaetz engaged in sex trafficking crimes, the Times said. Gaetz denied any wrongdoing and flipped the script to allege that he was being targeted by various individuals who were trying to shake his family down for money. Gaetz explicitly named former federal prosecutor and current private attorney David L. McGee of the Pensacola law firm Beggs & Lane as being part of the alleged scheme against him.

Beggs & Lane begged to differ with Gaetz’s characterization of what was occurring. The firm’s statement to Law&Crime reads in full:

Congressman Matt Gaetz made an allegation on The Tucker Carlson show last night that David L. McGee, a partner in the firm of Beggs & Lane, had attempted to extort money from Gaetz and his family in exchange for McGee making the investigation against Congressman Gaetz “go away.” The allegation by the Congressman is both false and defamatory. Mr. McGee was the Chief Assistant United States Attorney for the Northern District of Florida 25 years ago. During his tenure with the Department of Justice his reputation for integrity and ethical conduct was impeccable. It has remained impeccable throughout his 25 year tenure with our firm. While he was with the DOJ he would never have entertained a scheme such as what Congressman Gaetz suggests nor would he today. Unsubstantiated allegations do not change that fact.

According to online records maintained by The Florida Bar, McGee is a “member in good standing” and is fully “eligible to practice law in Florida.” He was admitted to practice law in the Sunshine State in Nov. 1976 and is a member of the Bar’s criminal law, health law, and trial lawyers sections. McGee’s online biography states that he “served for six years as the First Assistant at the United States Attorney’s Office and for seven years as the Lead Attorney for a United States Department of Justice Organized Crime Task Force.”

“He has extensive experience in complex litigation both in the civil and criminal arena and in courts throughout the United States,” McGee’s bio continues. “His litigation experience includes complex health care billing cases, large construction projects, environmental enforcement, tax cases and hundreds of securities cases.” He is listed as holding licenses to practice in various Florida state and federal courts, in an Alabama federal court, and before three federal appellate courts.

Over the past several weeks my family and I have been victims of an organized criminal extortion involving a former DOJ official seeking $25 million while threatening to smear my name.

We have been cooperating with federal authorities in this matter…

…and my father has even been wearing a wire at the FBI’s direction to catch these criminals. The planted leak to the FBI tonight was intended to thwart that investigation.

No part of the allegations against me are true, and the people pushing these lies are targets…

…of the ongoing extortion investigation.

I demand the DOJ immediately release the tapes, made at their direction, which implicate their former colleague in crimes against me based on false allegations.

“I do believe that there are people at the Department of Justice who are trying to smear me,” Gaetz said later Tuesday on Fox News. “Providing for flights and hotel rooms for people that you’re dating who are of legal age is not a crime.”

Carlson asked if it was true that Gaetz had a relationship with a 17-year-old girl.

“Who is this girl?” Carlson asked. “What are they talking about?”

“The person doesn’t exist. I have not had a relationship with a 17-year-old,” Gaetz said.

Earlier in the interview, Carlson admitted few facts were known; he teed up the conversation with an open-ended prompt which allowed Gaetz to answer as he pleased.

“This is obviously a serious allegation; tell us the truth from your perspective,” Carlson asked Gaetz.

It is a horrible allegation, and it is a lie. [The] New York Times is running a story that I have traveled with a 17-year-old woman, and that is verifiably false. People can look at my travel records and see that is not the case. What is happening is an extortion of me and my family involving a former Department of Justice official. On March 16th, my father got a text message demanding a meeting wherein a person demanded $25 million in exchanging for making horrible sex trafficking allegations against me go away. Our family was so troubled by that we went to the local FBI, and the FBI and the Department of Justice were so concerned about this attempted extortion of a member of Congress that they asked my dad to wear a wire, which he did with the former Department of Justice official.

Gaetz demanded the release of those audio recordings. He said they would “prove” his “innocence.”

This former Department of Justice official tomorrow was supposed to be contacted by my father so that specific instructions could be given regarding the wiring of $4.5 million as a down payment on this bribe. I don’t think it’s a coincidence that tonight somehow The New York Times is leaking this information, smearing me, and ruining the investigation that would likely result in one of the former colleagues of the current DOJ being brought to justice for trying to extort me and my family.

“Who is this Department of Justice former employee who is trying to extort the money from you, you say?” Carlson asked.

“His name is David McGee,” Gaetz answered. “He was a top official in the leadership in the Northern District of Florida as a prosecutor; he currently works at the Beggs & Lane law firm. As a matter of fact, one of the recordings that was made at the FBI and Department of Justice request occurred at that law firm, and the money that was supposed to be paid today that would have shown even more evidence of David McGee’s work in this extortion scheme that was foiled by The New York Times story — and I believe that’s why this horrible information and these terrible allegations have been used this evening.”

“You’re saying that David McGee was motivated by greed — he was trying to extort money from your family,” Carlson wondered out loud. “That’s his motivation, you’re saying?”

“I know that there was a demand for money in exchange for a commitment that he could make this investigation go away along with his co-conspirators. They even claimed to have specific connections inside the Biden White House. Now, I don’t know if that’s true; they were promising that Joe Biden would pardon me. Obviously, I don’t need a pardon; I’m not seeing a pardon; I’ve not done anything improper or wrong,” Gaetz answered.

Gaetz then lashed back at suggestions that he be removed from the House Judiciary Committee as a result of the accusations.

Gaetz’s father, former Florida Senate president Don Gaetz, told Politico late Tuesday that he wore a wire at the request of federal officials during at least one meeting with McGee. The elder Gaetz also said the plan was to transfer money to McGee.

Don Gaetz further told the outlet that his attorney was supposed to keep in touch with federal prosecutors as proof of the Gaetz’s family’s cooperation with the alleged extortion probe.

“I said to the FBI ‘I’m willing to wear a wire and be cooperative,’ but I was asked to say things that are not true to draw out an admission,” Don Gaetz told Politico. “I wanted there to be an understanding committed in writing that I’m working for the FBI and at their request, not operating on my own.”

The FBI and the local U.S. Attorney’s Office declined to comment to Politico about the case.

Editor’s note:  this piece, which began as a breaking news report, has been updated.