‘He’s Been Shot in the Face or the Head or Something’: 911 Calls Reveal Grisly Details About Phillip Adams Murder-Suicide 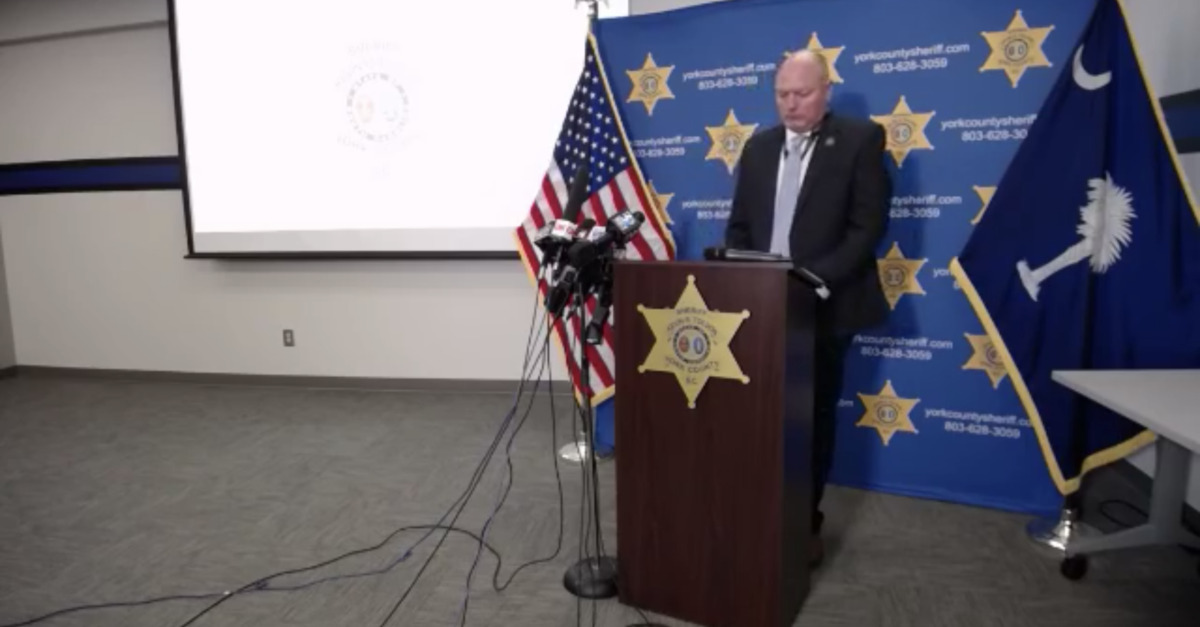 Grim new details have emerged in the case of former NFL player Phillip Adams, who shot and killed five people in Rock Hill, South Carolina on Wednesday before turning the gun on himself.

“The last 22 hours have been very busy,” a spokesperson for the York County Sheriff’s Office said during a press conference.

Sheriff Kevin Tolson started out by reading a statement from three of the victims’ families which acknowledged the community’s “outpouring of heartbreak, shock, grief and support.”

“We have probably more questions than what you do about this case right now,” the sheriff said to the assembled media.

“That is a question we are probing as we speak,” Tolson said as to the apparent motive for the six-fold murder-suicide.

The bulk of the press conference was taken up by two 911 calls.

A business owner said two of his HVAC technicians had been shot and called him. One of those technicians, Robert Shook, was the sole survivor of the believed-to-be-football-inspired massacre.

“I need to get an ambulance, and marshals I guess heading toward an address in Rock Hill,” the man says before describing the scene the victims he’s aware of on the scene.

“My technician literally called me 30 seconds ago,” the man says at one point.

The 911 operator repeatedly asks for more details but the man is understandably lacking about the particulars of the grisly incident.

“One’s down,” the man says when asked a general question about additional information.

“One is not moving; one is non-responsive,” when asked a specific question about the technicians’ health status. “The other is talking slurred. And I think he’s been shot in the face or the head or something because he can’t talk. He just keeps saying ‘I’ve been shot, I’ve been shot, call 911, please call 911’ and that’s all he’s been saying.”

The technician who died, James Lewis, 39, was a single father of three.

The other victims were Dr. Robert Lesslie, 70, his wife, Barbara Lesslie, 69, and their grandchildren Adah and Noah Lesslie, ages 9 and 5.

“I think we’ve had some trouble at 4456 Marshall Road,” another man says on a separate call.

“What’s going on on Marshall Road?” a second 911 operator asks.

“I think there’s been a bad shooting, maybe four people,” the man replies. “I was cutting grass out in the yard when I heard the shots.”

“How many shots did you hear?” the operator inquires.

“About 20,” the man says. “It’s automatic. I think there’s two outside. Two workers outside. There’s Miss Leslie on the inside of the house.”

The operator then asks for the caller’s location.

“I own the property but I’m away from the house because the guy walked out of the house. It was – I’m quite sure, I seen it from a distance – it looked like a black guy in black clothes carrying something red outside of the house.”

“Don’t go over to the house,” the operator implores when the second caller expresses his fear.

Eight minutes after those calls were made, the first sheriff’s deputies arrived, according to the sheriff’s office.

“It’s a large area and we began to assist the victims that we encountered,” Tolson said.

After that, a team was put together to clear the house, the sheriff said.

“Once we cleared the home, we found Dr. Robert Lesslie and his wife Barbara and their two children in a room in the back of the house all deceased with gun shot wounds,” Tolson noted.

Police said they quickly developed Adams as a suspect based on evidence that he left at the Lesslie home.

Adams later killed himself during something of a standoff at his parents’ nearby home where he retreated after the slayings. Adams’ parents were unaware of what their son had just done, Tolson said, and the last they knew he was alive but alone and isolated.

Police said they attempted to coax him out of the house but were unable to do so and that the former NFL journeyman killed himself initially unbeknownst to authorities.

“We did not hear any gunshots,” Tolson said. “We did try to negotiate and get him out of the room that he was in. We did not receive what we believed to be an adequate response.”

Alonzo Adams, the killer’s father, told local NBC affiliate WIS-TV that he believes his son’s vocation was responsible for the violent and deadly rampage.

“He was a good kid, he was a good kid,” the elder Adams said during an interview. “I think the football messed him up. You know, I don’t think he ever did anybody any harm.”