What follows is not an exhaustive accounting of those transcripts but rather some of the more interesting testimony from: (1) first in line heir to his father’s business (and perhaps political?) empire Donald Trump Jr.; (2) son-in-law-of-all-trades Jared Kushner; and (3) Trump’s 2016 digital media director and 2020 campaign manager Brad Parscale.

Parscale Remains Patient with the Gerontocracy

Rep. Jackie Speier (D-Calif.) honed in on a since-discredited story about the Trump 2016 campaign’s alleged ties to a Russian bank named Alfa based on widely-misunderstood internet protocol suites. Speier credulously brought up the report and quizzed Parscale about his–and the campaign’s–knowledge of that report.

Parscale began to explain why the story was bunk and relied on the initial reporter’s poor understanding of how the internet actually works when Rep. Jim Himes (D-Conn.) interjected to note that he also did not know how the internet works.

“So just to make sure I understand, I don’t actually know what a DNS server is,” Himes confessed–revealing the extent of the House Intelligence Committee’s actual intelligence about one of the most basic building blocks of the public internet.

Here’s how things went after that point:

So in the Internet when you have a domain name, multiple domain names can point to the same IP address. So it’s possible that your website for your reelect could be on the same with a Russian server, Putin’s, you would never know, completely possible. Why? Because you register a domain name to a server provider, that server provider shares that same IT address across multiple servers, that’s what’s called a router configuration, which then spreads the traffic.

So what they have done is they have created load balancers which load single IP addresses across, because of the expense of how hard it’s got for IP4. That makes a lot of sense, but if you don’t understand how the IP system works, which most Americans and most humans don’t, you would immediately say these feedings (ph) point to the same server, they must know each other. That’s not true. That would mean that 90 percent of the world’s businesses in the United States are colluding with each other because they use rack space.

“Okay,” Himes ventured, ultimately incorrectly. “So the explanation, just if I can summarize, the explanation you received was this third party, Alfa, is also occupying space in this server–”

“No, not even the same server,” Parscale noted.

Parscale briefly tried to explain things again before the bipartisan members of the Intelligence Committee decided that understanding how the internet works wasn’t actually that important after all: 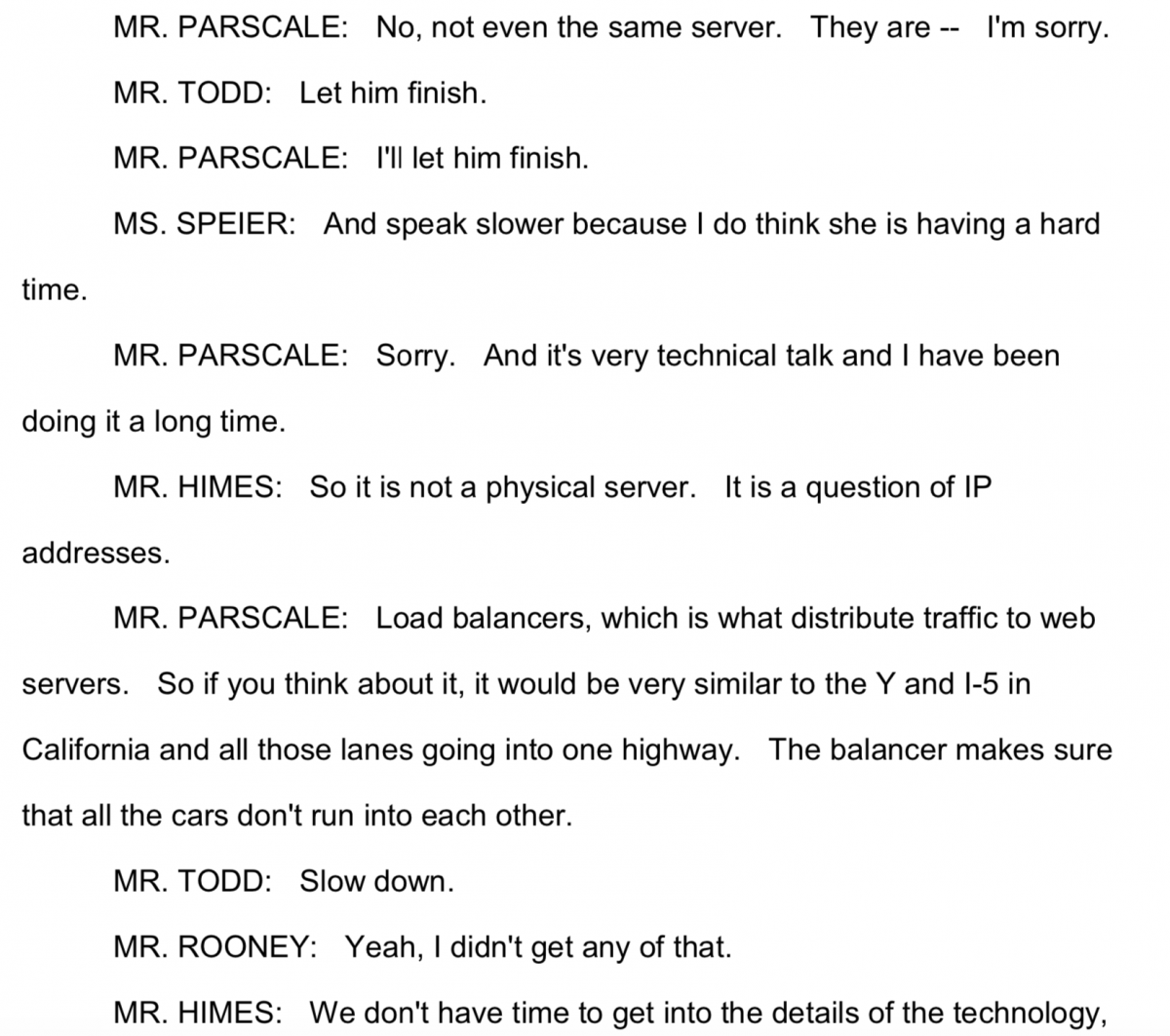 Don Jr. Gets Snippy With Adam Schiff (and Vice Versa)

Rep. Adam Schiff (D-Calif.) asked a lengthy series of questions regarding the context in which Trump Jr. came to release a four-page email exchange between himself and music publicist Rob Goldstone concerning potential Russian help for the Trump 2016 campaign’s efforts to dig up dirt on then-Democratic nominee Hillary Clinton.

Interspersed with protestations from his attorney Alan Futerfas, Trump Jr. was largely blithe and nonchalant with the committee over his actions on behalf of his father’s presidential campaign.

“And who did you consult in that decision?” Schiff asked, about releasing the emails originally reported on by the New York Times.

“Did you discuss it with anyone other than counsel?” Schiff pressed.

“Not anyone other than in privileged conversations,” Trump said.

“Now, Mr. Trump, apart from counsel, there are no privileged conversations,” Schiff shot back.

To which the younger Trump sarcastically replied: “Correct. So it would’ve been with counsel. So the answer is no.”

Testimony from Ivanka Trump‘s husband reveals an explicit and seemingly never-before-reported tie between Fox News and the Trump 2016 campaign.

“So with Dr. Phares, he was introduced to the President from Roger Ailes,”Kushner told Schiff. “I think he was a FOX News contributor, and he was one of the few people who was actually willing to put their name out publicly and say they were giving advice to our campaign.”

“And what was his role during the campaign?” Schiff asked.

Kushner replied vaguely and incompletely: “He would–I think he maybe met with the candidate maybe once, and I think he would send emails with suggestions that probably a small fraction actually got to the candidate with regards to the policy.”

“What was Michael Cohen’s role in the campaign?” Schiff asked.

Let’s go to the transcript, in which Kushner described Cohen as “virtually nonexistent” when it came to “actual” campaign operations: 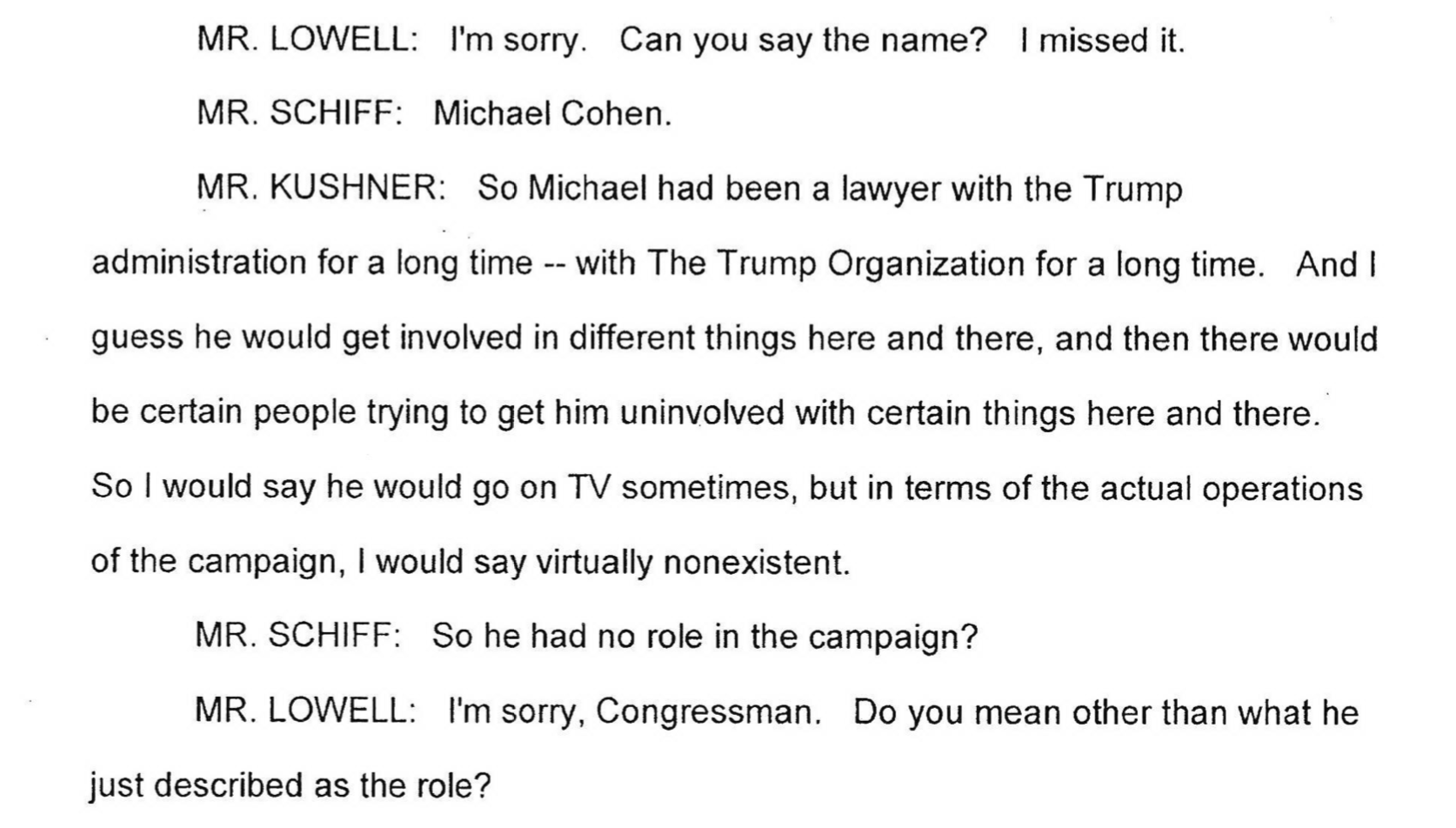