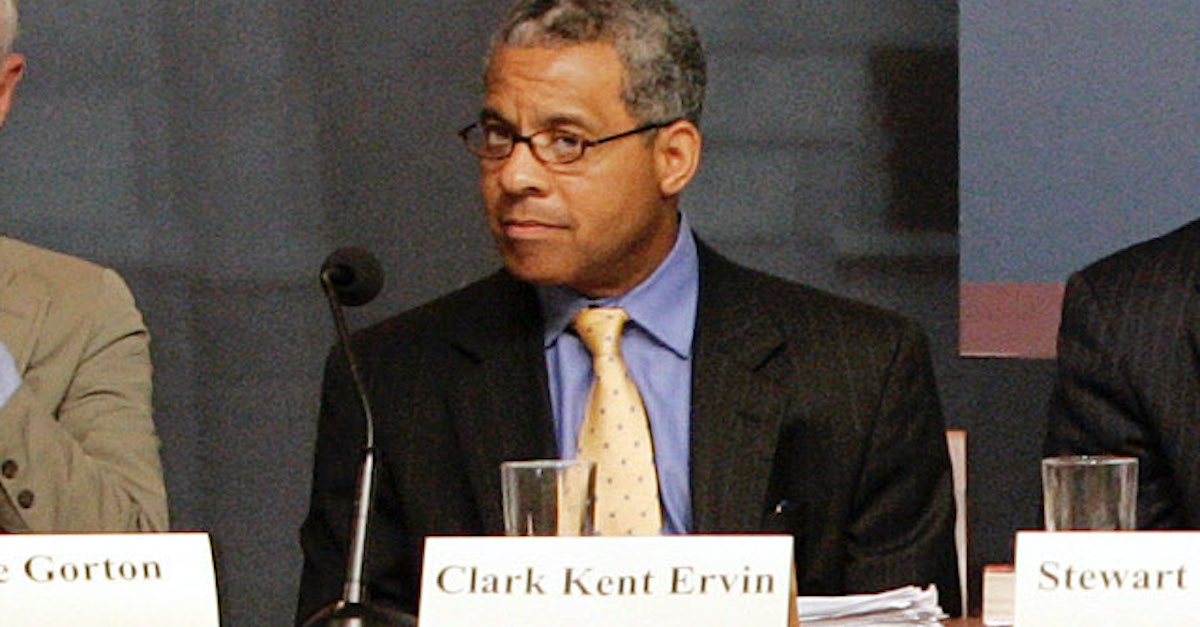 June 28, 2005 in Washington, D.C.: Members of the 9/11 Public Discourse Project held the event to discus securing the United States. The group discussed how far the United States has come in improving border security, transportation security, and emergency preparedness since the September 11, 2001 terror attacks.

Clark Kent Ervin, the first Homeland Security Inspector General of all time and a former State Department Inspector General during the George W. Bush presidency, warned on Monday that President Donald Trump’s controversial shakeup of independent government watchdogs will have a lasting impact.

During a segment on SiriusXM’s The Dan Abrams Show (Dan Abrams is the founder of Law&Crime), Ervin spoke candidly on his view of State Department IG Steve Linick’s ouster, the latest in a series of such ousters.

Abrams asked Ervin whether he was offended by what President Trump has been doing, given his years of experience serving as an inspector general.

“It is certainly troubling. There is no question about that,” Ervin said. “And it is contrary to the whole notion of inspectors general.”

Ervin said, however, that Congress has the tools at its disposal to counter these moves by the president.

“Congress has vast powers at its disposal. The Congress has appropriations power. The Congress has—the Senate has nominations power, the power to hold up nominations. And so there are a number of things that members of Congress in both parties can do if a bipartisan consensus is formed as to the importance of protecting inspectors general. So I hope that that’s what we’ll see,” Ervin said.

It is more than unlikely that Senate Majority Leader Mitch McConnell (R-Ky.) will abandon his “leave no [judicial] vacancy” mantra in order to check the president’s decision-making on this subject.

Ervin also said he’s concerned that the mission of the inspectors general is now compromised.

“These kinds of moves I’m afraid will have a chilling effect that will dissuade inspectors general from carrying out their statutory mandate. That’s the short-term and that’s the long-term implication of this,” he said.

Finally, Ervin noted that he supported Bush’s election in 2000 and re-election in 2004, but was able, nonetheless, to separate his private politics from what he thought was the right thing to do as an independent watchdog.

“I checked my politics at the door,” he said. “In carrying out the role of inspector general at both of those agencies, I conducted such audits and such investigations as I thought needed to be conducted and irrespective of what the political consequences were.”

According to Democratic lawmakers, Linick was looking into both President Trump’s sale of arms to Saudi Arabia and Secretary of State Mike Pompeo’s treatment of a staffer. The reason the president offered in a letter to Congress last Friday for removing Linick? That he had lost confidence in him. (Trump said Monday that he didn’t know Linick.) Sen. Chuck Grassley (R-Iowa) sent a letter to the president on Monday seeking the real reason for the decision. It’s unclear if that letter will receive a response or if Grassley will follow up.

Trump’s announcement of his intent on a Friday night to fire Linick was precisely what happened in the case of Intelligence Community IG Michael Atkinson, who was actually a Trump appointee. The president cited a loss of confidence. But Atkinson’s original sin was finding the Ukraine whistleblower’s complaint was “credible” and “urgent.” The bottom line: Atkinson’s determination meant the complaint was required by law to be shared with Congress. Impeachment and impeachment acquittal soon followed, but so did a purge of inspectors general more broadly.

Additionally, the president recently fired Health and Human Services Principal Deputy IG Christi A. Grimm during the coronavirus pandemic. That happened after Grimm put together a report noting there were “widespread shortages of personal protective equipment (PPE).” Trump also removed Department of Defense IG Glenn Fine, who had been named the chair of the Pandemic Response Accountability Committee–a role that was supposed to have great oversight authority over pandemic stimulus spending.