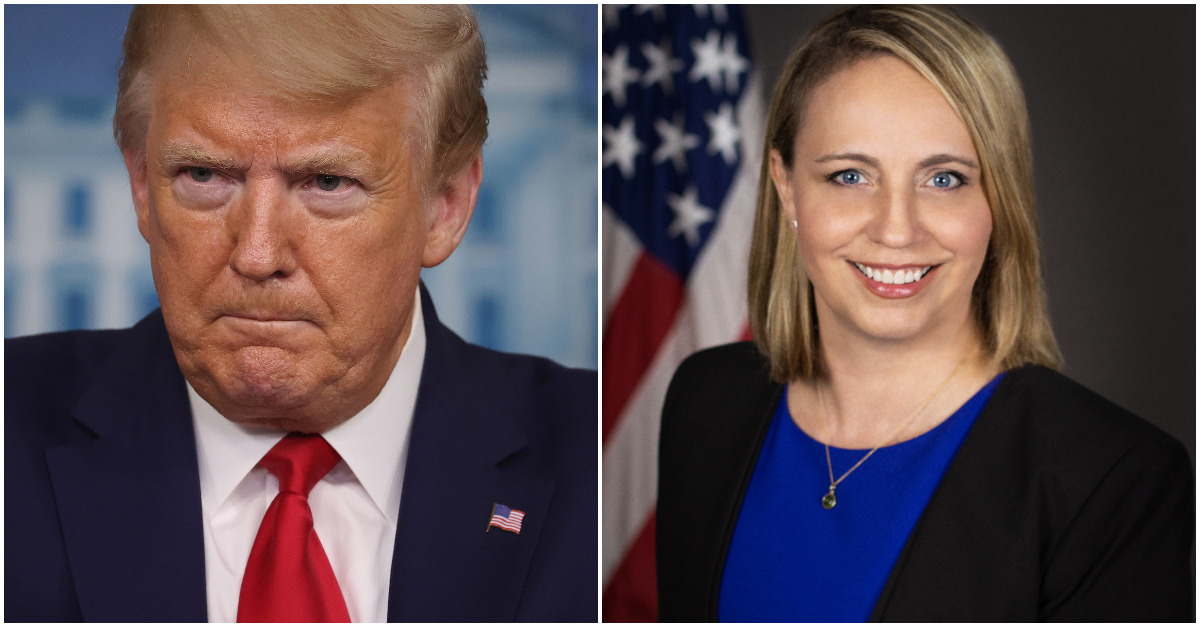 “The purge of those who can conduct oversight of and scrutinize the actions of the executive branch continues unabated,” national security and federal employment attorney Bradley P. Moss told Law&Crime in an email. “The president won’t be satisfied until he has destroyed every element of accountability we have built up over decades of good governance reforms.”

News of Grimm’s ouster comes as Trump has moved to solidify his control more generally across the semi-independent agencies that purport to conduct oversight over the executive branch. Inspectors general are appointed by the president, but their mission statements are centered around preserving “integrity” as well as leading “efforts to fight waste, fraud and abuse” at the federal level.

“It is imperative to democracy that Inspectors General remain independent, that they answer to the people rather than the President,” famed intelligence community whistleblower attorney Mark Zaid told Law&Crime via email. “But recent weeks appear to demonstrate the President is ensuring loyalists are put in place. We need to see outrage from Congress rather than virtual silence.”

The possible removal of Grimm is particularly salient, however, as the nation reels from the federal response to the novel coronavirus (COVID-19) pandemic. The HHS OIG has been at the forefront of documenting administration failures.

It has been recently reported that Grimm’s office would further investigate whistleblower and other complaints about the Trump Administration’s handling of the pandemic.

Harvard Law Professor Laurence Tribe also slammed the move but cautioned that it was not likely to go over well.

“President Trump’s knee-jerk response to anyone who has vital information to report that might cast him or his minions in a bad light is to shoot the messenger,” he told Law&Crime via email. “That’s got to be wearing thin even with his most loyal, reflexive supporters. Even they have got to see by now that this self-important, truth-defying bloviator is endangering not only abstractions like truth and decency but their own lives and the lives and health of their loved ones.”

While quickly slammed, Grimm’s possibly brief tenure atop the oversight agency is not particularly unexpected. Trump has previously been quite loud about his disdain for her work as the head of HHS OIG.

“Why didn’t the I.G., who spent 8 years with the Obama Administration (Did she Report on the failed H1N1 Swine Flu debacle where 17,000 people died?), want to talk to the Admirals, Generals, V.P. & others in charge, before doing her report,” Trump tweeted in April. “Another Fake Dossier!”

The HHS OIG, for their part, fired back at the White House by insisting the report was nothing out of the ordinary.

“We approached this survey with the same integrity and quality standards as we have in previous work,” the agency told Law&Crime. “We interviewed knowledgeable professionals at more than 320 hospitals across 46 states, the District of Columbia, and Puerto Rico.”

Trump’s characterization of Grimm as an Obama-era partisan is false. According to her federal biography, Grimm is a career OIG official who began working with the agency as a program evaluator in 1999 during the Bill Clinton presidency. She’s been there through Clinton, Bush, Obama, and Trump–Democrats and Republicans. She was only elevated to her recent position by the Trump Administration in January of this year. In other words, she was his pick.

“Trump is replacing the HHS Inspector General because she released a report showing shortages at hospitals during the pandemic,” noted former White House ethics attorney Walter Shaub. “This action shows how Trump’s corruption endangers the public.”

Shaub repeatedly blasted the legal coup against Grimm in a series of tweets Saturday morning.

“This is a war on the primary anticorruption mechanism,” he wrote, “Trump is firing IGs, replacing them with loyalists and trying to cow others into pulling their punches. Republican Senators like [Chuck Grassley (R-Iowa)] made a show of mild concern but are preventing Congress from holding Trump accountable.”

“HHS’s IG office is the biggest one,” he added in another tweet. “It’s [sic] staff of 1,600 officials oversee $1 trillion in federal spending. To retaliate against the acting IG who exposed shortages at hospitals during pandemic, Trump nominated . . . wait for it . . . not a manager but a staff-level DOJ lawyer.”

Weida, of course, would need to be questioned and confirmed by the full U.S. Senate before taking over Grimm’s duties.

[Images via Chip Somodevilla/Getty Images & Office of the Inspector General]