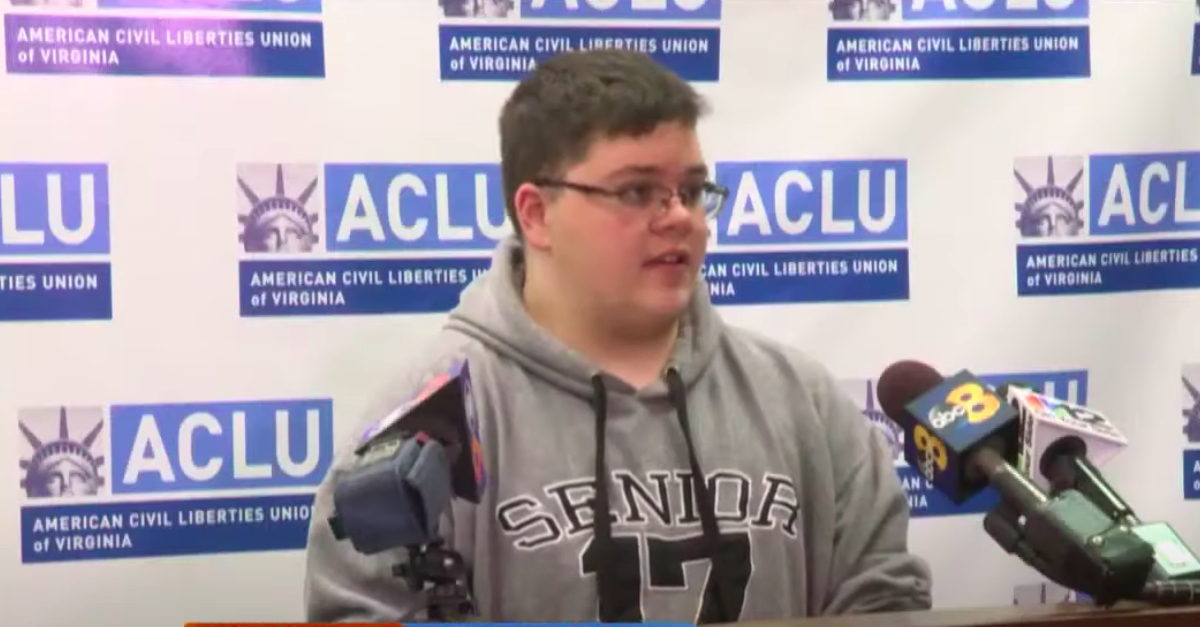 The U.S. Supreme Court on Monday declined to take up an appeal brought by a Virginia school board seeking to reinstate its controversial transgender bathroom ban. By rejecting the case, the high court left in place a lower appellate court ruling which held that prohibiting students from using the restroom matching their gender identity was unconstitutional.

In 2015, then-student Gavin Grimm—who came out as a transgender boy and transitioned in high school—sued the Gloucester County School Board after his school refused to let him use the male bathroom. The school required Grimm and other transgender students to use an “alternate private” restroom, asserting that the rule was necessary to protect the privacy of the student body.

A federal district court in Virginia in 2018 struck down the policy as unconstitutional, saying that “the perpetuation of harm to a child stemming from unconstitutional conduct cannot be allowed to stand.”

“After the Supreme Court’s recent decision in Bostock v. Clayton County, we have little difficulty holding that a bathroom policy precluding Grimm from using the boys restrooms discriminated against him ‘on the basis of sex,’” Floyd wrote. “Although Bostock interprets Title VII of the Civil Rights Act of 1964, it guides our evaluation of claims under Title IX. That is because the discriminator is necessarily referring to the individual’s sex to determine incongruence between sex and gender, making sex a but-for cause for the discriminator’s actions. As explained above in the equal protection discussion, the Board could not exclude Grimm from the boys bathrooms without referencing his ‘biological gender’ under the policy, which it has defined as the sex marker on his birth certificate.”

The Circuit Court also said that the school’s restrictions were put in place due to ignorance of the medical community’s understanding of the nature of being transgender and due to pressure not from students, but from adults. Floyd closed his opinion with an auspicious nod to the role of courts in protecting a generation of student from systemic bigotry.

“The proudest moments of the federal judiciary have been when we affirm the burgeoning values of our bright youth, rather than preserve the prejudices of the past,” he wrote. ”How shallow a promise of equal protection that would not protect Grimm from the fantastical fears and unfounded prejudices of his adult community.”

Conservative Justices Clarence Thomas and Samuel Alito both voted in favor of hearing the appeal.

Grimm praised the decision as a major victory for the transgender community on Monday.

“I am glad that my years-long fight to have my school see me for who I am is over,” Grimm said in a statement. “Being forced to use the nurse’s room, a private bathroom, and the girl’s room was humiliating for me, and having to go to out-of-the-way bathrooms severely interfered with my education. Trans youth deserve to use the bathroom in peace without being humiliated and stigmatized by their own school boards and elected officials.”

Josh Block, a senior staff attorney with the American Civil Liberties Union (ACLU), which represented Grimm throughout the protracted litigation emphasized that the decision not to hear the appeal on the bathroom ban was becoming a trend for the high court, which many feared would curtail LGTBQ rights.

“This is the third time in recent years that the Supreme Court has allowed appeals court decisions in support of transgender students to stand,” Block said in a statement, referring to high court decisions  in other bathroom-related cases from May 2019 and December 2020. “This is an incredible victory for Gavin and for transgender students around the country. Our work is not yet done, and the ACLU is continuing to fight against anti-trans laws targeting trans youth in states around the country.”