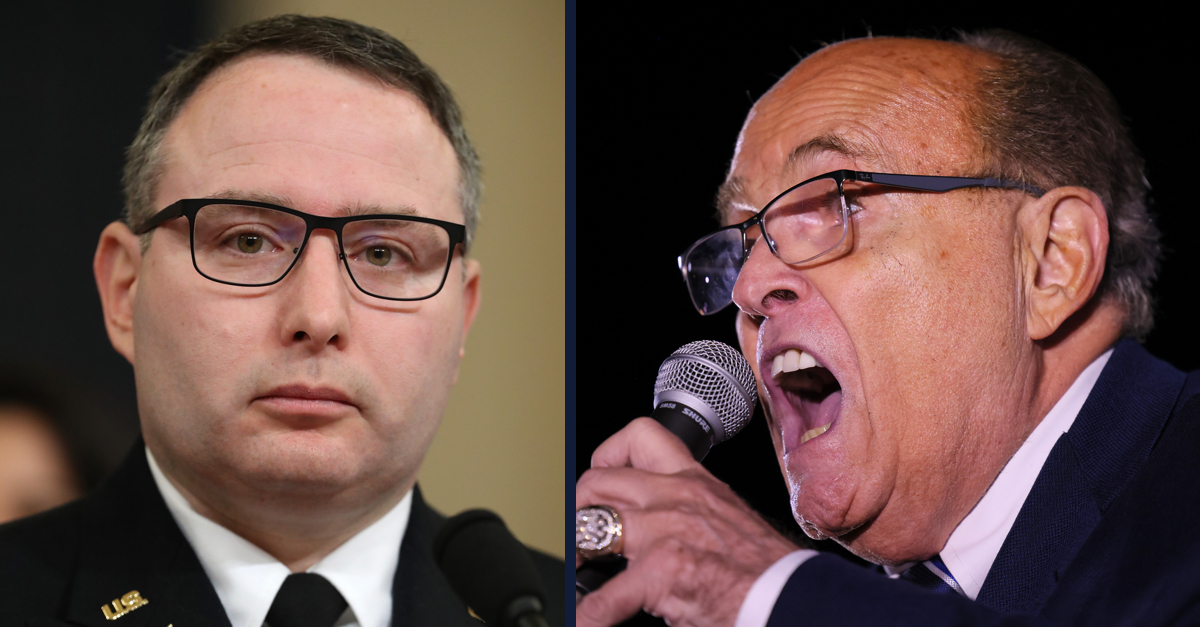 A federal judge has dismissed Lt. Col. Alexander Vindman’s civil rights lawsuit against allies of former President Donald Trump, finding that the retired U.S. Army veteran had failed to allege facts in support of his claim that he was the target of an unlawful conspiracy that ultimately forced him out of his job at the White House.

In November 2019, Vindman told Congress that he overheard a conversation between Trump and Ukrainian President Volodymyr Zelensky, in which Trump allegedly tied support for Ukraine to an investigation into Hunter Biden, the son of Trump’s then-political rival Joe Biden, who would later go on to defeat Trump in the 2020 presidential election. Vindman said that he was so alarmed by the call that he alerted his superiors.

Trump allies — including the defendants — mobilized after Vindman’s testimony, questioning his credibility and accusing him of being loyal to Ukraine over the U.S.

In his lawsuit, Vindman argued that the defendants worked together to cause injury to him that included “leaking classified information, removing him from his NSC post, delaying his promotion, and causing his constructive termination” in violation of the Ku Klux Klan Act. The defendants moved to dismiss, arguing that Vindman had failed to properly state a claim for civil conspiracy.

Vindman retired in July 2020 after determining that “retaliation” from Trump would prevent him from going any further in his military career.

In a ruling issued Tuesday, Boasberg, a Barack Obama appointee, found that Vindman hadn’t shown facts “that suggest a plausible inference that any Defendant agreed to otherwise unlawfully injure Vindman.”

As to removal, non-promotion, and constructive termination, Plaintiff does not allege any facts that suggest that these Defendants, who had no power to take any such actions, entered into an agreement to do so, particularly in light of the National Security Advisor’s statement that Vindman’s NSC removal was his decision alone. As to defamation, separate from whether any Defendant did in fact defame Plaintiff — a question the Court takes up below — the issue here is whether any of them agreed with any other person to do so. As discussed, the facts pled against these Defendants include only allegations that they had targeted others in the past, that they worked together to defend the former President during his impeachment proceedings, and that they either circulated talking points or tweeted critically about Vindman. As before, these facts do not allow for a plausible inference that any Defendant agreed with any other on the common goal of unlawfully injuring Vindman. Again, that is particularly so given obvious alternative explanations for their behavior.

Boasberg found that Vindman’s defamation allegations failed to show that the statements were either false or made with actual malice, two requirements necessary in order to prove a defamation claim.

The judge also concluded that the defendants had offered “obvious alternative explanations” for their statements.

“It is perfectly natural for a presidential Administration to coordinate internally and with outside allies to defend its actions, which here offers a lawful obvious alternative explanation to Vindman’s charge of unlawful conspiracy,” Boasberg wrote (citations removed). “Parallel conduct among political allies does not alone plausibly establish unlawful conspiracy.”

Boasberg did acknowledge, however, that despite the defendants’ efforts to diminish the impact of their statements, Vindman did in fact pay a price for what defendants had said about him.

“These events all caused significant harm to Plaintiff and his family,” Boasberg wrote (citations removed). “More than the ‘hurt feelings’ that Defendants blithely identify, Vindman describes how Defendants’ onslaught prevented him from continuing his military career; caused him to fear for the physical safety of his family; subjected him to personal threats online, id., ¶ 233; and caused his wife and daughter to alter their behavior to stay safe. He paid this price because he complied with a duly issued Congressional subpoena, not because he thrust himself into the fray. Defendants’ actions had consequences, and while the Court is duty bound to apply governing legal standards, it nonetheless pauses to recognize the real harm that their attacks inflicted on Vindman and his family.”

A spokesperson for Protect Democracy, a nonprofit advocacy group that represented Vindman in this case, told Law&Crime that the organization is considering its options, but there are no immediate plans to appeal.

Lawyers for Vindman insisted, however, that despite Tuesday’s ruling, bringing the lawsuit was the right thing to do.

“While we are disappointed by the court’s decision and are considering next steps, we have no doubt that it was right for Lt. Col. Vindman to seek accountability in court for the coordinated campaign of intimidation and retaliation waged against him because he honored his oath as a public servant,” Kristy Parker, Counsel with Protect Democracy, told Law&Crime in an emailed statement on Wednesday. “We are proud to represent Lt. Col. Vindman in this case. As the events of the last few years have made clear, our democratic institutions rely on people like Lt. Col. Vindman to act as guardrails against abuses of power. Protect Democracy will continue to support and defend those who stand up for our democracy.”

Attorneys for Donald Trump, Jr., Scavino, and Hahn did not immediately respond to Law&Crime’s request for comment.

You can read the ruling here.