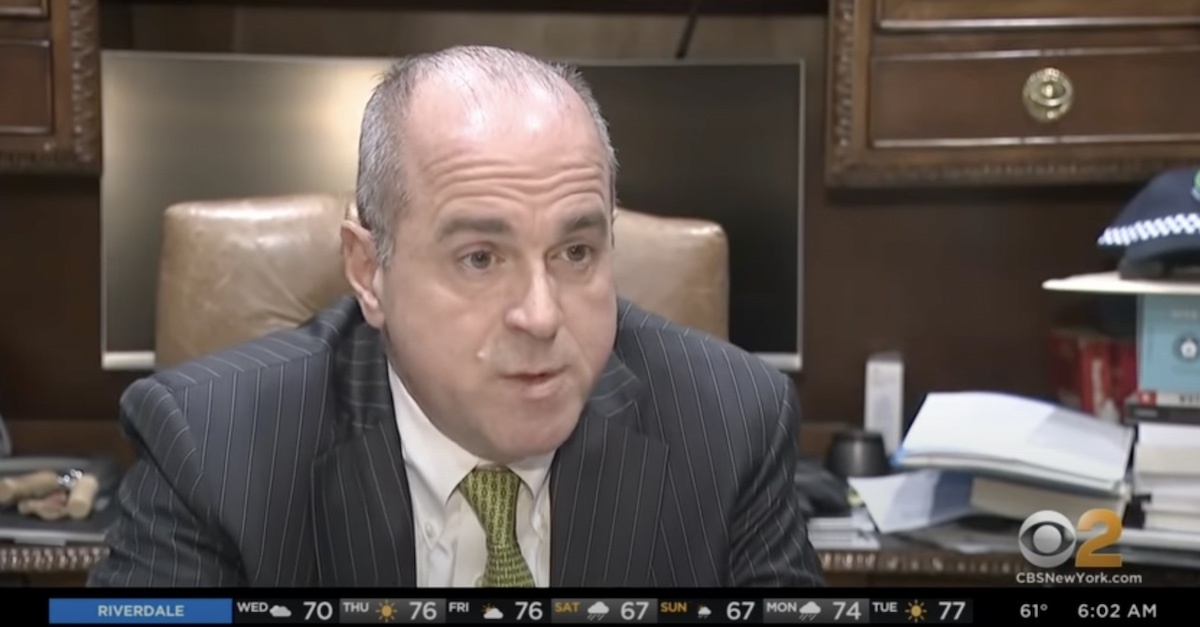 The U.S. Department of Justice on Wednesday announced charges against the former president of a powerful New York City police union.

Edward D. Mullins, of Port Washington, N.Y., is charged with one count of wire fraud, which carries a maximum sentence of 20 years in prison, the DOJ announced said in a Wednesday afternoon press release.

Mullins, 60, was president of the Sergeants Benevolent Association (“SBA”), “the union that represents all current and former Sergeants of the New York City Police Department” for nearly two decades, the DOJ explained. He stepped down from that post last October, the DOJ said.

The union is allegedly the fifth-largest police union in the United States, federal prosecutors wrote in an information filed in federal court.

U.S. Attorney for the Southern District of New York Damian Williams said Mullins “abused his position of trust and authority to fund a lavish lifestyle that was paid for by the monthly dues of the thousands of hard-working Sergeants of the NYPD.”

“Mullins submitted hundreds of phony expense reports to further his scheme, stealing hundreds of thousands of dollars from the SBA,” Williams said. “This Office is committed to rooting out corruption at all levels of government, and that includes public officials like Mullins who use their positions of power to line their own pockets to the detriment of others.”

“As SBA president, Mullins allegedly went above and beyond to best serve his own interests,” Driscoll continued. “Our NYPD sergeants expect and deserve more from their union leadership than they received. Today, thanks to the joint efforts of those on the FBI/NYPD Public Corruption Task Force, we’re righting that wrong.”

NYPD Commissioner Keechant L. Sewell said Mullins “allegedly violated the ethics and rules of this department, the trust of 13,000 Sergeants, active and retired whom he represented, and the laws of the United States.”

Sewell credited the NYPD’s Internal Affairs Bureau and cooperating authorities with the FBI’s Public Corruption Unit for bringing about the arrest.

According to the information filed in federal court, here’s how the alleged scheme went down:

Between in or around 2017 and in or around October 2021, MULLINS defrauded the SBA by using his personal credit card to pay for meals at high-end restaurants and to purchase luxury personal items, among other things, and then submitting false and inflated expense reports to the SBA, seeking reimbursement for those bills as legitimate SBA expenditures when in fact they were not. Altogether, MULLINS was reimbursed for over $1 million dollars in expenses from the SBA, the majority of which was fraudulently obtained.

The SBA has a written expense reimbursement policy (the “Policy”). The Policy provides, among other things, that “the SBA will reimburse actual and reasonable meal expenses required to conduct SBA business or fulfill the SBA’s mission.” In order to be “reimbursable,” expenses “must be closely related to SBA business.” The Policy further provides that “[r]eceipts are required for any meal,” and that “[r]equests for reimbursement for meals in excess of $50.00 must be accompanied by an attendee list and the subject matter discussed.”

The document says an unnamed SBC vice president “routinely scrutinized expense reimbursement requests and rejected certain expenses if they were too high or were not supported by receipts” after 2014. However, in or around 2017, the VP “retired as an officer,” and a subsequent treasurer “did not scrutinize the expense reports in the same manner,” the information alleges. That resulted in the treasurer having “approved hundreds of expense reports for MULLINS, totaling more than $1 million dollars” between 2017 and 2021.

Beginning in 2017, MULLINS devised a scheme to fund his personal expenses through SBA dollars. Specifically, MULLINS charged his personal credit card for, among other things, hundreds of high-end meals, clothing, jewelry, home appliances, and a relative’s college tuition. MULLINS then submitted, typically by email, fraudulent and inflated expense reports to the Treasurer of the SBA, seeking reimbursement for such items purporting to be legitimate SBA expenditures when in fact they were not. MULLINS rarely included receipts.

The Treasurer processed the expense reports once they were received – almost always without obtaining any receipts – and issued SBA reimbursement checks to MULLINS from the Contingent Fund – i.e., the fund that was made up almost entirely of member dues. MULLINS then deposited the checks into his bank account or enlisted an individual at the SBA to deposit the checks on MULLINS’s behalf at a bank branch near the SBA’s headquarters in lower Manhattan. MULLINS then, usually immediately thereafter, paid down his credit card bills with the deposited funds.

The document goes on to allege several specific instances of conduct which are said by federal prosecutors to fit the aforementioned modus operandi.

The website Gothamist described Mullins’s departure from office as the upshot of a “raid” on his home and on SBA offices.  It called Mullins an “incendiary union leader who frequently accused New York’s political leaders of being soft on crime.”

“Prior to his departure, Mullins faced a pair of department trials for disclosing personal information about [now-former] Mayor Bill de Blasio’s daughter,” Gothamist noted, “and for referring to two city officials as a ‘bitch‘ and ‘first class whore‘ on Twitter.”

The tweets resulted in Mullins losing a reported 70 vacation days — a total of $32,000 — Gothamist said.  But Mullins “avoided termination,” the publication reported, “allowing him to leave with the bulk of his benefits.”

Read the full court document in the recent federal charges below:

[image via screengrab from WCBS-TV]