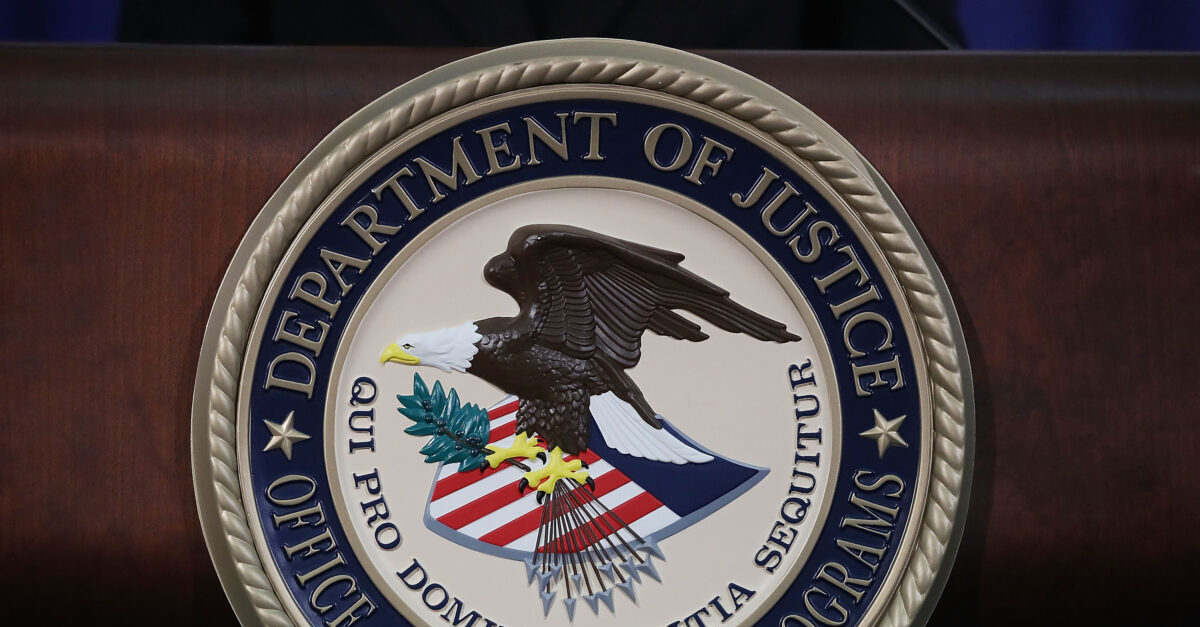 The U.S. Department of Justice uncovered a plot to attack major power grids in support of white supremacist ideology (image via Getty Images)

Three men pleaded guilty on Wednesday to conspiring to provide material support to terrorists after authorities learned of their plan to attack power grids across the country according to the U.S. Justice Department.

Christopher Cook, 20, of Columbus, Ohio; Jackson Sawall, 22, of Oshkosh, Wisconsin; and Jonathan Frost, 24, of Katy, Texas and of West Lafayette, Indiana now face a maximum sentence of 15 years in prison.

The men believed that these attacks would help aid the rise of white supremacist ideology by creating “confusion” and “unrest” among Americans as the government worked to rebuild and recover the damaged power grids, according to court documents filed in the U.S. District Court for the Southern District of Ohio. Those documents state that the three men believed that this would be an ideal climate for the rise of a white leader.

The plan was to attack the substations, or power grids, with powerful rifles that would penetrate the transformers, which members of the group estimated would cost the government millions to recover. In addition, the defendants believed that time associated with replacing the substations would cause confusion and unrest for Americans in the region. There were also conversations about how the possibility of the power being out for many months could cause some serious change or straight out war, even a race war; additionally, that without power across the country, it could cause the next Great Depression, people wouldn’t show up to work, the economy could crash and there would be a ripe opportunity for potential (white) leaders to rise up. One theme of the group discussions centered around the need to create disorder to bring the system down, which would cause people to doubt the system and create a true revolutionary force against the system.

Cook and Frost began to plan these attacks back in 2019 after meeting in a chat room, according to the statement of facts included in the plea agreements of all three men. Frost, who first “shared the idea of attacking a power grid,” focused on logistics. Cook worked to recruit new members.

As part of the recruitment process, COOK often asked a lot of literary questions; COOK even circulated a book list of suggested, if not required, reading that promoted the ideology of white supremacy and Neo-Nazism, including such titles as “A Squires [sic] Trial” and “Siege.” Siege places an emphasis on gaining power through violence as opposed to political means. COOK also sought out recruits that were younger believing it was less likely the individuals were members of law enforcement.

Sawall, a close friend of Cook according to court filings, joined the mission in late 2019. He began to assist Cook in recruiting new individuals, and according to court documents, helped expand the operation by creating chat groups to further the cause of the three men.

SAWALL also was responsible for the online propaganda chat group, “The Front,” which served to assist in recruitment and would have ultimately claimed responsibility for the attacks. Those that made it past the initial screening were invited into an online chat group titled, “Lights Out.” To this group, COOK shared plans via text to participate in a large-scale power outage by attacking the U.S. Electric Grid that included a link to a U.S. Department of Energy report titled, “Large Power Transformers and the U.S. Electric Grid,” that discussed specific information about the grid and issues with replacing large transformers in a timely manner.

The group eventually grew to have five members, including one juvenile, according to the statement of facts. The plan was for the men to each target a substation in a different region of the country (Northeast, Southeast, Midwest, Northwest, and Southwest) using AR-47 rifles that Forst had been building. These ghost rifles would have no serial numbers, and in February 2020 Frost traveled from Indiana to Ohio so he could give Cook one of these rifles and the men could try out the weapon at a shooting range according to court documents.

That same month, Frost provided the men with another lethal weapon, according to the statement of facts.

In the “Lights On” chat group, COOK, FROST, SAWALL and others also discussed purchasing necklaces that would contain a lethal substance to be ingested if and when they were caught by law enforcement. Ultimately, FROST purchased the materials needed to make suicide necklaces online, which he filled with Fentanyl. On at least one occasion, both COOK and SAWALL expressed their commitment to dying in furtherance of their mission. In February 2020, FROST eventually provided the necklaces to COOK and SAWALL during their meeting in Columbus, Ohio.

At one point during this meeting in Ohio, Sawall and Cook “purchased spray paint and painted a swastika flag under a bridge at a park with the caption, ‘Join the Front.'” Plans for some similar stunts promoting the men’s white supremacist and neo-Nazi ideologies were soon derailed however due to a series of incidents.

The first problem the men encountered was when Sawall “swallowed his suicide pill and ultimately survived” after being pulled over during a routine traffic stop. That did not concern the men much, according to the complaint, and they took off for Texas with plans to stop in Oklahoma to meet a possible recruit.

According to court filings, that recruit lost his phone, and the person who found the device had some strong feelings of their own after seeing the communications between the group. He expressed those feelings when the men called the phone at one point.

Instead, the person who found the phone and the Nazi propaganda on it answered their calls and told them the phone would be turned into the police, which caused FROST and COOK to start destroying their online communication accounts. FROST and COOK again were stopped by law enforcement in Texas, which led to the discovery of a small amount of Fentanyl that had been left over from the necklaces as well as multiple electronic devices and burner phones. Eventually, the pair made it to Katy, Texas, and met up with another juvenile recruit. During a meeting with the same individual the following day, COOK again was encountered by law enforcement, which FROST observed and the two decided to split up. COOK made his way to Jasper, Texas to stay in the home of another juvenile recruit.

Just a few months later, the FBI raided the homes of all three men, killing any hope that they might be able to carry out their plot. Some of the items agents found in those raids were detailed in the statement of facts.

In COOK’S bedroom, agents located a copy of the book “Siege,” the cellular telephone used to communicate with coconspirators, a tactical magazine and various camouflage jackets and pants. Racially Motivated Violent Extremism (RMVE) Nazi material also was found in the digital evidence seized from COOK. A recently acquired, but not yet assembled, rifle also was found in the pantry. In FROST’S home, agents discovered multiple firearms, including an AR15 pistol with no serial number, suppressors, milling tools and components. Chemicals and components found in FROST’s bedroom were consistent with someone attempting to test and assemble an explosive device; in fact, FBI lab testing later confirmed that the chemicals could be used to create an explosive device. Digital evidence seized from the search revealed a large amount of RMVE Nazi related material such as videos, books and images, detailed U.S. power infastructure information, an article regarding the sabotage of a power substation in California and a list of specific power substations, weapons modification manuals and explosives production diagrams and manuals. SAWALL’s residence revealed three memo pads that contained various writings, including statements like “Revolution is our solution,” A laptop contained documents describing The Front, the recruitment process, and an oath of allegiance. SAWALL’s cellular telephone contained The Front propaganda posters and photographs of “Join The Front” graffiti and the Nazi flag graffiti by COOK and SAWALL in Ohio.

The three men were each charged with providing material support to terrorism by a bill of information filed on Feb. 7. A federal district court judge will now determine the sentence for each of the men in light of their guilty pleas.

“The defendants in this case wanted to attack regional power substations and expected the damage would lead to economic distress and civil unrest,” said Assistant Director Timothy Langan of the FBI’s Counterterrorism Division.

“These individuals wanted to carry out such a plot because of their adherence to racially or ethnically motivated violent extremist views. When individuals move from espousing particular views to planning or committing acts of violence the FBI will investigate and take action to stop their plans. We will continue to work with our law enforcement partners to protect our communities.”