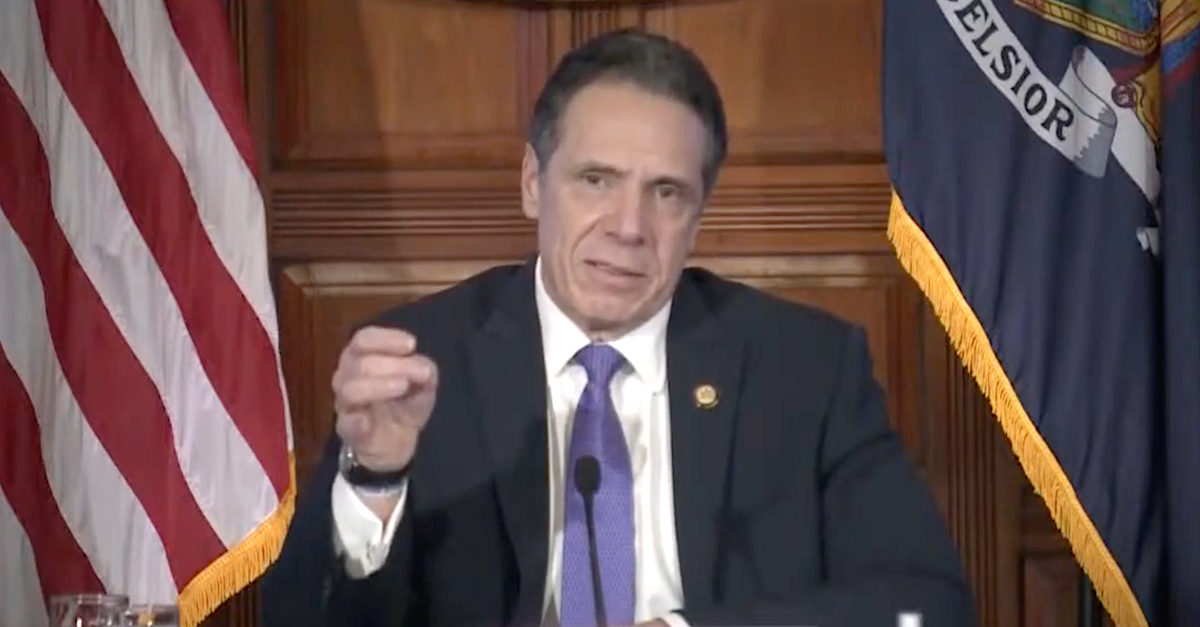 Rita Glavin, Cuomo’s attorney, said the ex-governor would personally file the missive due to what she called James’s decision to “damage Gov. Cuomo to advance her gubernatorial campaign” by failing to challenge inconsistencies in witness statements and, in Glavin’s view, failing to apply the law to the facts asserted during a sprawling harassment probe last year.

“That’s why she did it,” Glavin said while underscoring her assertion that James orchestrated a politically motivated investigation into the former governor. “There’s no other reason.”

James announced she was herself running for governor the day after the Albany County Sheriff’s Department employed a rarely known and little-used mechanism to file a misdemeanor charge against Cuomo. James dropped out of the gubernatorial race less than two months later. A judge tossed the misdemeanor against Cuomo in early January after prosecutors said they could not prove the case beyond a reasonable doubt.

Glavin spent nearly an hour Thursday afternoon redressing grievances she and the former governor shared concerning an Aug. 3, 2021 report from the James’s office that probed allegations of sexual harassment against the now-former governor. Cuomo has apologized for making people feel uncomfortable but has long asserted that he “never” made “inappropriate sexual advances.” He resigned to avoid an impeachment trial that would have distracted the state’s response to the COVID-19 pandemic and because too many in the legislature had been tainted by James’s report, Glavin said.

“The Attorney General’s August 3, 2021 Report is materially misleading, flawed, and unreliable due to glaring omissions and errors regarding facts, evidence, and applicable law,” Glavin wrote in a slide shared with reporters during a videoconference.

Specifically, Glavin asserted that the report failed to include exculpatory information — that is, information favorable to Cuomo — and that the AG’s failure should result in an amended report.

“The Attorney General promoted her Report as unquestionable and undeniable fact,” Glavin wrote while citing assertions by James that Cuomo was an alleged “serial sexual harasser” of “eleven” women. Glavin said considerable evidence “contradicted the findings” and that the public only saw “some of the evidence.”

Glavin flatly accused James of political gamesmanship by releasing the conclusory report and then “decid[ing] to selectively release some transcripts” — but not others — in connection with the probe. Glavin said 179 people were interviewed but indicated that James only released 41 transcripts.

She later pressed the notion that Cuomo’s alleged conduct, even if true, was permissible under both federal and state law.

“They failed to the apply the law to these eleven instances,” the attorney said.

For instance, one of the allegations was that Cuomo kissed a female state trooper on the cheek. Glavin said a number of men indicated that Cuomo did the same thing to them. Because the conduct wasn’t based on gender, Glavin said it didn’t qualify as harassment.

Glavin said James’s office was not skeptical of “contradictory evidence” from several of Cuomo’s accusers and their friends and even credited testimony which was proven to be a lie.

Glavin directly accused Cuomo accuser (and former adviser) Lindsey Boylan of having directed a “series of threats” toward the governor’s staff and of subsequently having “lied under oath” while accusing Cuomo of malfeasance — accusations Glavin has teed up in past comments. Glavin said the AG’s staff failed to confront Boylan about the alleged threats — which she said resulted in one witness changing their story — and failed to probe whether or not Boylan held a vendetta against the governor.

“All of that is relevant to her credibility,” Glavin added with reference to Boylan. 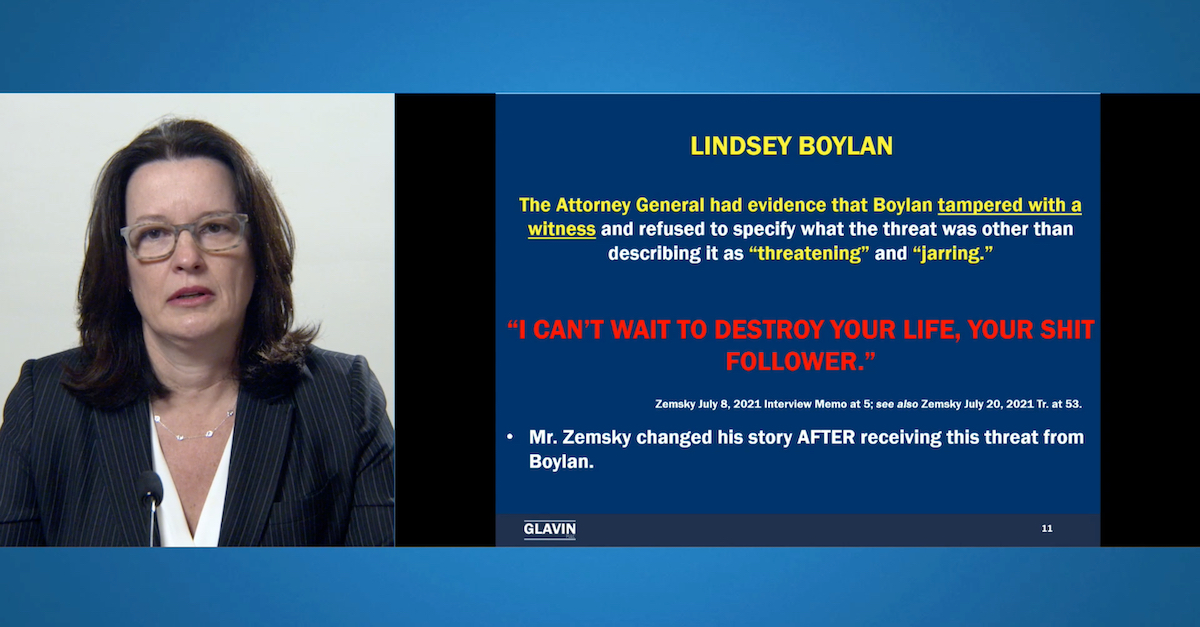 “The series of threats and evidence that Ms. Boylan lied under oath had to be explored by the chief legal officer of the state,” Glavin said of James. “Failure to do so is misconduct, because the report becomes misleading.” 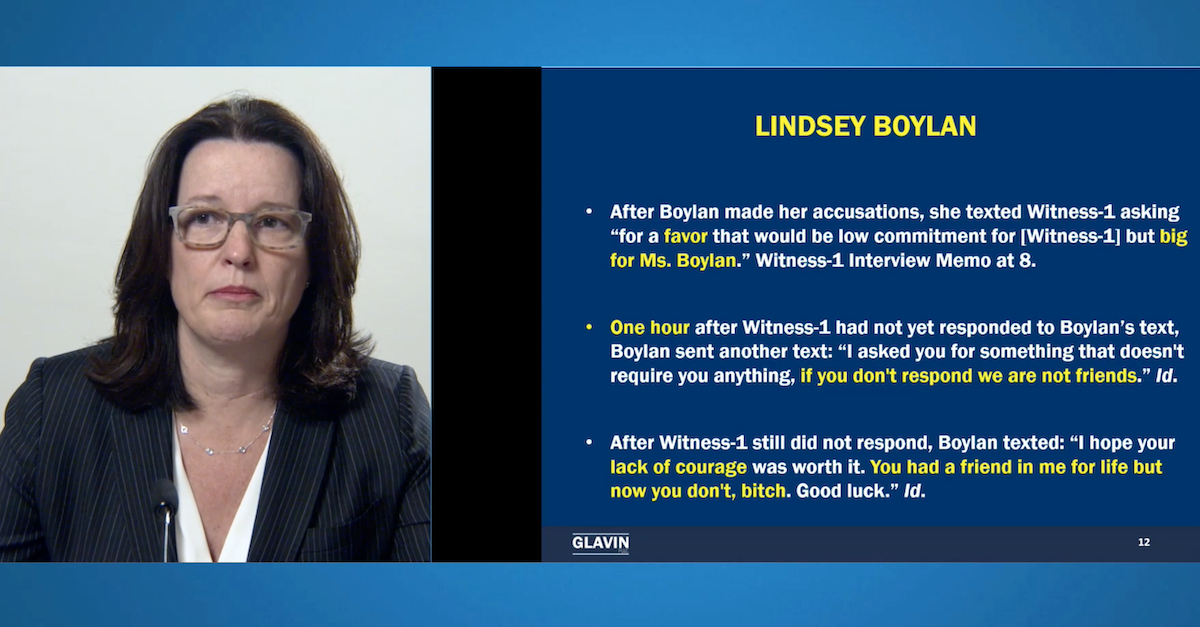 Rita Glavin asserts that statements between Lindsay Boylan and a friend raise questions about Boylan’s veracity.

Glavin also played a recording of the official statements by Alyssa McGrath, who Glavin described as a longtime friend of Cuomo accuser Brittany Commisso.

“Alyssa McGrath gets caught in a lie,” Glavin said while referencing the video footage. “She gets caught in this, and they still credit her testimony . . . the report found her credible.”

The context was a photo of Commisso with Cuomo — which Commisso texted to McGrath right after Cuomo allegedly “forcibly groped” Commisso. Glavin said the text messages which accompanied the photo do not suggest that a forcible groping immediately preceded the photo or the conversation. 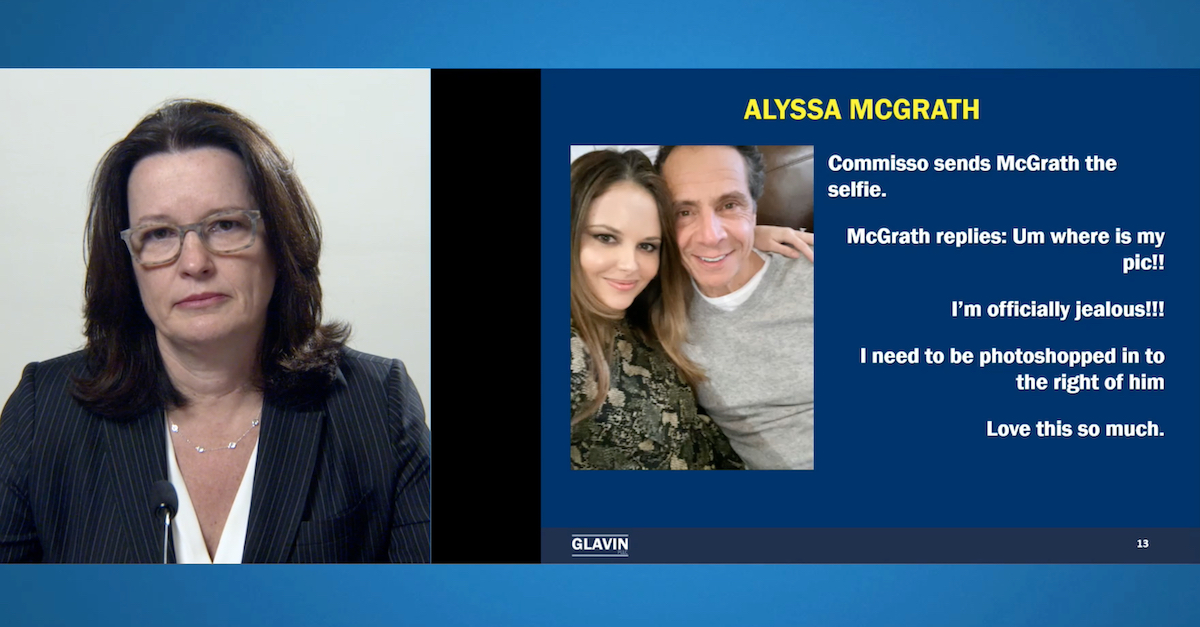 In the video recording, McGrath said she “felt like she needed” to respond positively of the photo since, in that moment, she “felt like I needed to say that considering she was with him and he wanted, um, he asked that it be sent to me, so she sent that in real time to me.”

McGrath said she wanted to be “not rude.”

But when asked how she knew Cuomo wanted the photo sent to her, she said she found out “after the fact” that Cuomo asked that the photo be sent to her.

“You wrote the ‘I’m officially jealous’ before that?” the questioner asked.

In other words, she couldn’t have said she was “officially jealous” because she knew Cuomo wanted her to see the image, as she first claimed, because she didn’t know that information until after she typed that line.

Glavin said Commisso’s story needed to be more harshly challenged because it changed and didn’t add up.

“She gets caught in this, and yet they still credit her testimony,” Glavin said.  “This is Brittany Commisso’s best friend. They credit her testimony, and, they don’t say, ‘well, excuse me, why did you just say to us something that could not have happened — that was not true?’ The report found her credible.”

Glavin also said Commisso has repeatedly changed her story about whether she was wearing an overcoat when Cuomo allegedly groped her. Glavin said the AG’s investigators gave Commisso “at least five opportunities” straighten our her story — proof, Glavin claimed, that the AG’s office was trying to force Commisso into an ordained narrative against Cuomo or was at least willing to overlook exploitable flaws in her narrative. 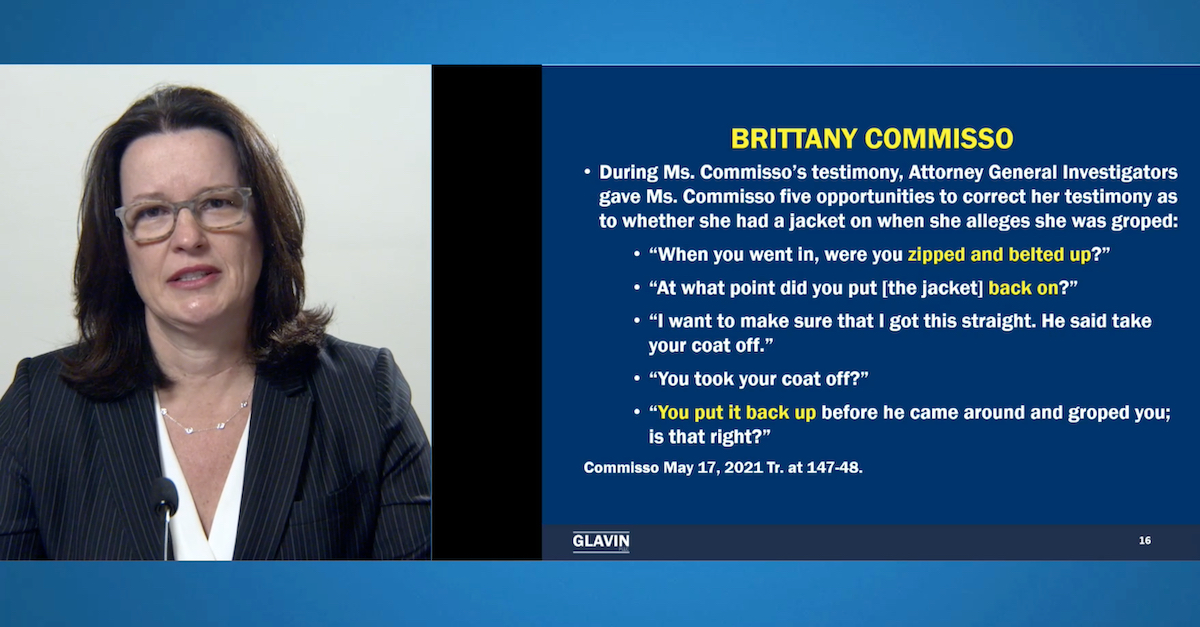 While picking apart the witnesses, Glavin’s core criticism was squarely aimed at James.

“She did a selective slow roll and misuse of her office for her political campaign,” Glavin said of James.

Glavin is renewing request for the AG’s office to release all of the evidence underlying its report.

“There was very little done that was independent,” Glavin said with reference to the assembly’s probe.

“That’s a felony,” Glavin said, which needed to be investigated by a state law enforcement misconduct office — presumably the one which is part of the AG’s office.

“The governor feels strongly there was misconduct,” Glavin said, noting Cuomo would personally file the complaint against James with state lawyer regulation authorities.

Glavin refused to speculate about the extent of possible punishments for James.

Glavin shoved back at questions from a reporter which characterized Cuomo as a perpetrator.

“He will not let this go,” Glavin said. “It is insulting to tell someone who has been wrongly accused and treated unfairly to just move on . . . he’s not going to move on because truth is important. Process is important . . . if witnesses have lied and there is evidence of it, there must be accountability.”

When asked if Cuomo should have stayed in office and fought the allegations, Glavin said that most of the members of the state assembly were poised to impeach before having “seen any of the evidence” or even heard Cuomo’s side of the story.

“You think he was going to get a fair trial when it went to the Senate?” Glavin asked rhetorically.

She immediately noted that “most” of the Senate — the jurors who would have tried Cuomo in a threatened-but-thwarted impeachment proceeding — had already opined that they believed Cuomo needed to be removed prior to fully hearing his side of the story.

Glavin said she could not confirm whether she was involved in settlement talks with any of Cuomo’s accusers.