Washington Man Who Punched Two Cops at the Capitol on Jan. 6 Sentenced to Time Behind Bars 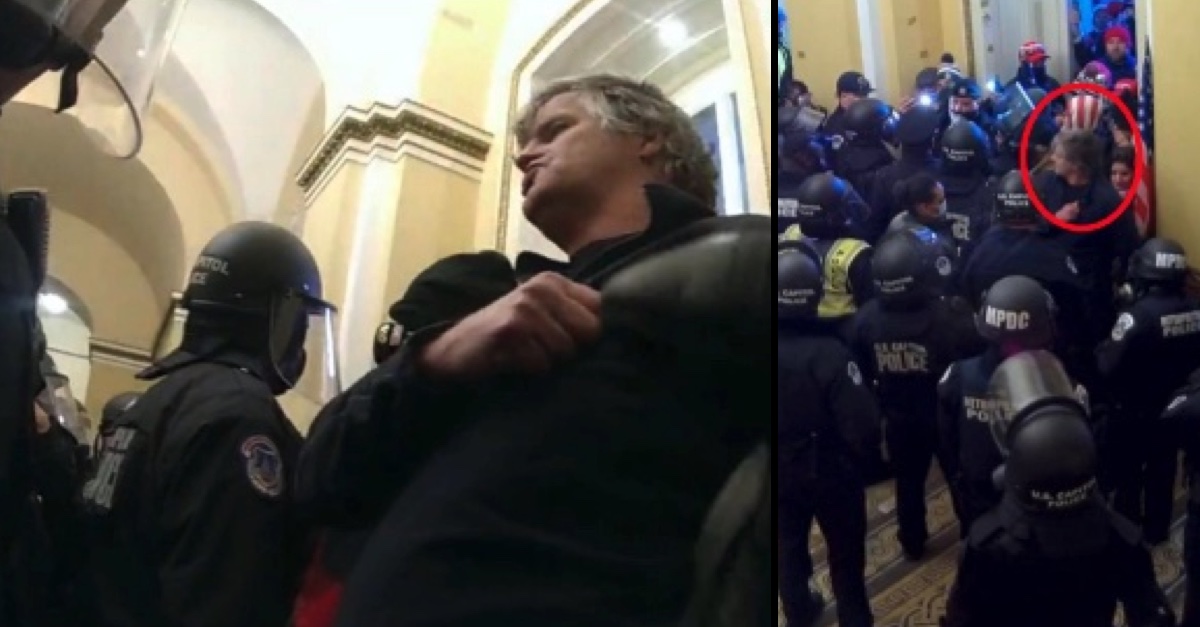 Mark Leffingwell confronts police at the U.S. Capitol on Jan. 6.  (Image via the FBI.)

The Washington state man who punched two police officers during a standoff at the Capitol on Jan. 6 has been sentenced to six months in prison.

Mark Leffingwell, 52, pleaded guilty in October to one count of assaulting, resisting, or impeding police officers. He faced off against police inside the Capitol building as officers struggled to hold off the mob, and when the officers made a move to physically push Leffingwell and others out of the building, Leffingwell struck back. He first punched Capitol Police Officer Daniel Amendola in the head and then punched officer Wyatt Hart, also in the head. He next punched Amendola once more. The officers weren’t seriously injured and were able to subdue Leffingwell and take him into custody.

Prosecutors had requested a sentence of 27 months in prison followed by three years of supervised release. It wasn’t clear what sentence Leffingwell requested, as his sentencing memorandum was filed under seal and wast therefore not immediately available to the public.

At Leffingwell’s sentencing hearing Thursday, U.S. District Judge Amy Berman Jackson said that his was one of the most difficult sentencing decisions she has faced.

Jackson, a Barack Obama appointee, acknowledged Leffingwell’s military service, noting that he is a “decorated veteran” who served twice: after an honorable discharge, he later re-enlisted to join the war in Iraq, where he suffered a traumatic brain injury.

“You had served your country already, but you chose to serve again,” Jackson said.

But that history, Jackson added, meant that Leffingwell “should have known better” than to join the mob of Donald Trump supporters who overran police to swarm the U.S. Capitol and temporarily stopped Congress from certifying Joe Biden‘s win in the 2020 presidential election.

Jackson took particular note of a verbal exchange during which an officer told Leffingwell that he was doing his job by protecting the Capitol.

“You knew even then that was completely uncalled for,” Jackson told the defendant. “You are a man of service, a man of duty, a student of history. You knew they were doing what they were supposed to do. It’s the same thing you’ve explained to school children [about] what you were doing in Iraq: Protecting our country. Protecting our freedom.”

Jackson said that Leffingwell did more than just join the crowd. Once inside the Capitol building, he urged the crowd behind him to keep pushing forward through the line of police officers trying to keep them out.

“You looked down on the people who didn’t want to [confront] the overwhelming force [of police] inside,” Jackson said. “You thought they were cowards . . . they were scared, as you say. And you were proud that you weren’t.”

“You chose this battle and you patted yourself on the back for your bravery,” Jackson added.

However, Jackson did acknowledge that Leffingwell had shown remorse almost immediately, apologizing to the officers when he encountered them shortly after being taken into custody.

“I wanted to emphasize I’m embarrassed and ashamed of myself about what happened,” Leffingwell said at the hearing. He indicated the whole thing has been a “nightmare” for him.

“I’m sorry for taking everyone’s time,” he said, adding: “I wish I could go back and make it not happen.”

In the end, Jackson sentenced Leffingwell to six months behind bars followed by two years of supervised release. She also ordered him to perform 200 hours of community service.

Jackson said that since she felt Leffingwell couldn’t be trusted to avoid misinformation, he would be prohibited during probation from leaving Washington state or going to the state capital without advance permission.

In a comment perhaps directed to an audience beyond Thursday’s sentencing hearing, Jackson said that “it needs to be clear” that the Jan. 6 attack on the capitol “is not legitimate political discourse.”

Jackson added there is no good justification for attacking the capitol in support of a “disappointed candidate” to “disrupt the electoral process.”

Jackson gave Leffingwell’s attorney Mark Carroll one week to provide additional information on how a prison sentence could affect Leffingwell’s ability to collect his military pension, as Jackson was clear that it would not be appropriate to “deprive [him] of the disability benefits [he] truly earned and that [he and his family] deserve.”

Jackson also said she would allow Leffingwell to voluntarily surrender himself to a federal prison when it came time to start serving his sentence and did not require that he be immediately taken into custody.