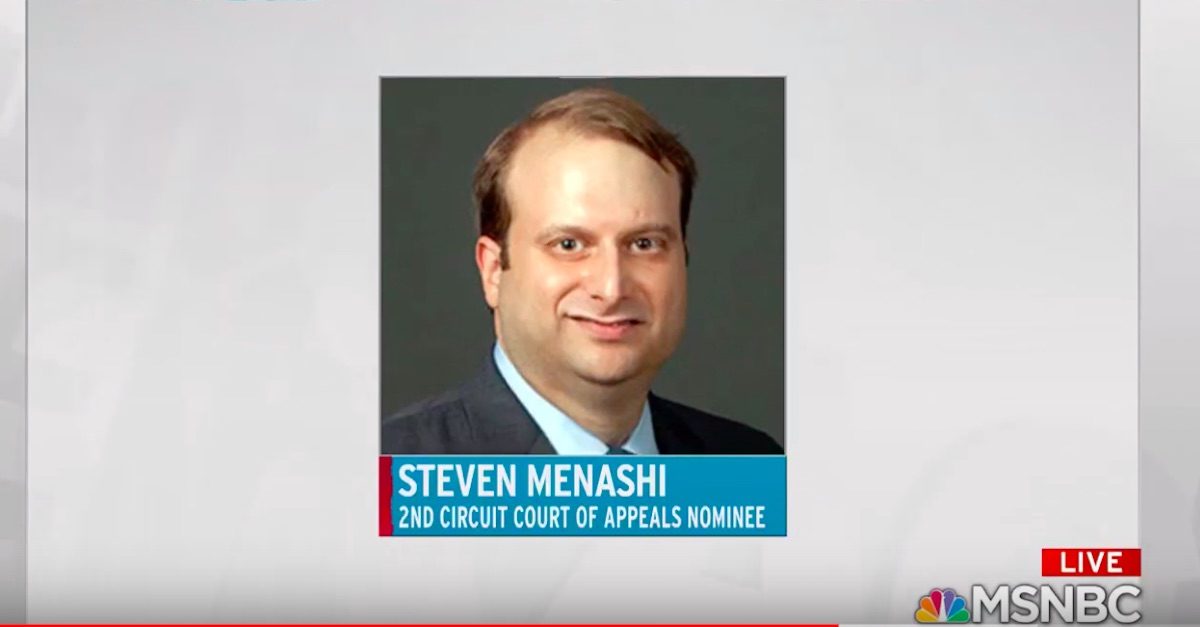 MSNBC television host Rachel Maddow on Thursday called out one of Donald Trump’s most recent nominees for a lifetime appointment to a federal appeals court bench, accusing him of promoting “racial purity” in a 2010 law review article. The article, titled “Ethnonationalism and Liberal Democracy,” was written by Second Circuit nominee Steven Menashi.  It argues that “ethnonationalism remains a common and accepted feature of liberal democracy that is consistent with current state practice and international law.”

Menashi, who is currently a Special Assistant to the President and Senior Associate Counsel to the President, previously served as Acting General Counsel at the Department of Education under Education Secretary Betsy DeVos. He published the piece in 2010 in the University of Pennsylvania Journal for International Law (Volume 32, Issue 1, Page 57).

The language in the piece is the sort of weighty verbiage expected in an academic article.  “International law and practice confirm that a sovereign democratic government may represent a particular ethnonational community,” Menashi writes, using Israel as an example.  “Far from being unique, the experience of Israel exemplifies the character of liberal democracy by highlighting its dependence on particularistic nation-states.”

An incredulous Maddow viewed the piece through the lens of white nationalism in America, even though the term “white” appears nowhere in it and the piece speaks harshly against the Nazis.

“Ethonationalism – ethnic nationalism – we have been talking about a lot in the country in recent weeks for obvious and terrible reasons about ‘white nationalism,’ which is the new branding that domestic terrorists are using in this country for ‘white supremacy,’” Maddow said before reading from the article.

Maddow describes the piece, which Menashi wrote to rebut accusations that Israel’s “particularistic identity—its desire to serve as a homeland for the Jewish people—contradicts principles of universalism and equality upon which liberal democracy supposedly rests,” as an “international tour of ethnonationalism through the ages.”

She then says that the article ends with a “war cry” galvanized by the idea that  “definitely democracy cannot work unless the country is defined by a unifying race” (her words, not his).

She then read some of the article’s more polemical passages, said that the work constitutes academic argument that “you can’t really have a country that works if you’ve got all sorts of different people in it,” and concluded that it was a “highbrow argument for racial purity.”

In an email to the Daily Signal on Friday, Menashi disputed Maddow’s classification of his work.

“I take seriously the role of the United States as a nation of immigrants and of Israel as a home for the Jewish people, both of which are important because of suffering that has been caused by ethnic nationalism,” Menashi wrote.

Menashi added that his father was an Iraqi Jew born in Iran and his mother’s parents were Jewish refugees from the Soviet Union.

Writing for the National Review, attorney Ed Whelan argued that Maddow’s segment was rife with false claims and grossly distorted the article’s scope and purpose:

Menashi’s argument about national identity is clearly not about “racial purity” or a “unifying race.” Indeed, the fact that Israelis from Ethiopia are black makes it impossible to take seriously the claim that Menashi is making a case for “racial purity.” Menashi further states that it “is not even clear … that Israel’s national identity can even be described as ‘ethnic’” (in a narrow sense of that concept), as Israeli Jews come from “Argentina, Ethiopia, Germany, Morocco, Russia, and Yemen.”

Ethnonationalism and Liberal Democracy by Law&Crime on Scribd