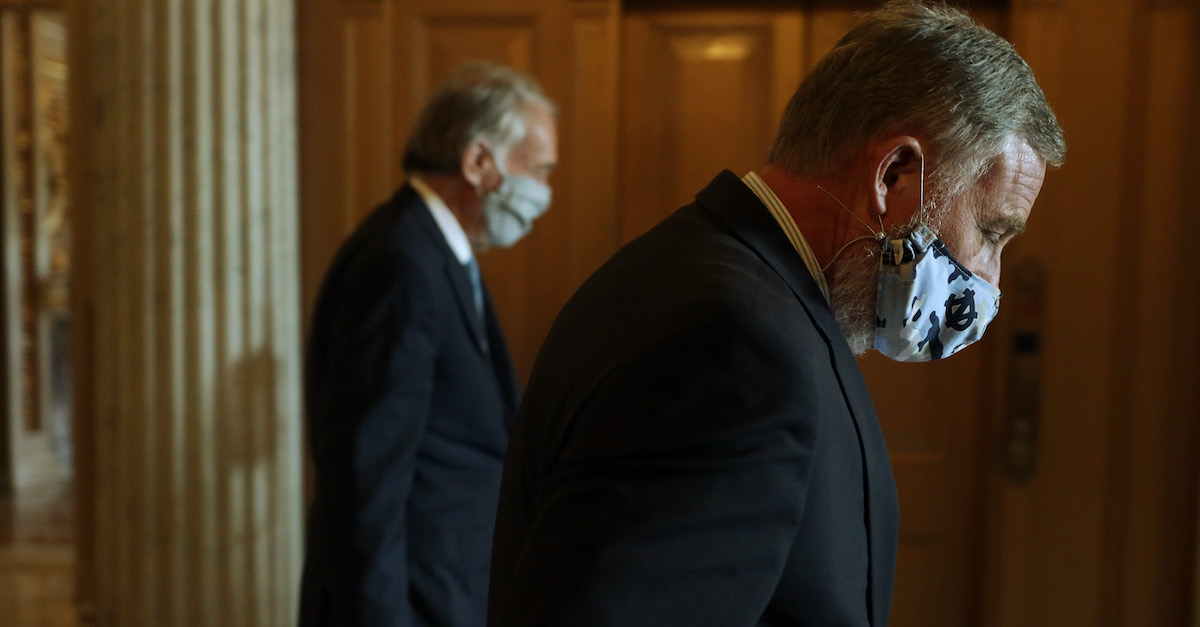 The U.S. Department of Justice has reportedly told defense lawyers for Sens. Kelly Loeffler (R-Ga.), James Inhofe (R-Okla.) and Dianne Feinstein (D-Calif.) that investigations of the circumstances surrounding their pre-pandemic-crisis stock trades are closing. Only Sen. Richard Burr’s (R-N.C.) stock dump ahead of the coronavirus-related market crash remains under investigation.

The Wall Street Journal cited “people familiar with the matter” on Tuesday when reporting this key update on the status of these probes. Each of the senators has denied making trades based on information they obtained from a behind-closed-doors Senate briefing on COVID-19 in January.

“No search warrant has been served on Sen. Loeffler. She has followed both the letter and spirit of the law and will continue to do so,” a Loeffler spokesperson said on May 14.

In March, Loeffler herself said she would be “happy to answer any and all questions and would submit to whatever review is needed.”

“I think we have to make sure all the rules and laws are followed. I think they are being followed. At least in my case, I know they are,” she said.  “I can’t speak for other people. That’s certainly what securities law is for, that’s what ethics rules are for, that’s what I’m very confident that we are complying with, have always complied with, and will continue to do.”

Sen. Inhofe said in March that any allegations of insider trading against him were “baseless and 100 percent false.”

“I was not at the briefing on January 24. I was meeting with pro-life kids from Oklahoma here for the March for Life and the new nominee to be U.S. Ambassador to Tanzania,” he said. “I do not have any involvement in my investment decisions. In December 2018, shortly after becoming chairman of the Senate Armed Services Committee, I instructed my financial advisor to move me out of all stocks and into mutual funds to avoid any appearance of controversy. My advisor has been doing so faithfully since that time and I am not aware of or consulted about any transactions.”

The Los Angeles Times also cited a “person familiar with the matter” when reporting that the Feinstein probe had been “cleared by [the] Justice Department for [her] husband’s stock trades”:

Federal prosecutors informed Feinstein’s personal attorney Tuesday afternoon of their decision. The person familiar with the matter said prosecutors were also closing investigations into two other senators who traded stocks in the days before the market tanked: Sen. Kelly Loeffler (R-Ga.) and Sen. Jim Inhofe (R-Idaho). Loeffler sold stocks valued at between $1.25 million and $3.1 million in late February and early March in companies that later dropped significantly. In January, Inhofe sold stocks valued at as much as $750,000.

“Under Senate rules I report my husband’s financial transactions,” she added. “I have no input into his decisions. My husband in January and February sold shares of a cancer therapy company. This company is unrelated to any work on the coronavirus and the sale was unrelated to the situation.”

That the case against Sen. Burr remains active as others close is not entirely a surprise. It was reported that the FBI obtained a warrant and seized his cell phone, which indicated the investigation was further along than the others.

Like the other senators, Burr has denied wrongdoing. Recently, Burr temporarily stepped down from his role as chairman of the Senate Intelligence Committee amid the DOJ probe of stock trades that occurred shortly before the financial markets tanked due to the spread of the novel coronavirus.

“Senator Burr contacted me this morning to inform me of his decision to step aside as Chairman of the Intelligence Committee during the pendency of the investigation,” Senate Majority Leader Mitch McConnell (R-Ky.) said. “We agreed that this decision would be in the best interests of the committee and will be effective at the end of the day tomorrow.”

As previously reported by Law&Crime, Burr penned an op-ed for Fox News in which he and Sen. Lamar Alexander (R-Tenn.) delivered an optimistic evaluation of the federal government’s response to the global pandemic, writing that “the United States is better prepared than ever before” for such a crisis. That was in early February.

Burr, whose role as chairman of the Senate Intelligence Committee gave him vast access to otherwise confidential reports, denied allegations that his trades were based on any non-public information in a statement. He said he relied “solely on public news reports” in making his investment decisions. He also asked the chairman of the Senate Ethics Committee to “open a complete review” into his February trades. Sen. Burr’s brother-in-law Gerald Fauth also sold six stocks on the same day (Feb. 13) as Burr.

“Senator Burr participated in the stock market based on public information and he did not coordinate his decision to trade on February 13 with Mr. Fauth,” Burr’s attorney, Alice Fisher said in a statement.

Aaron Keller and Jerry Lambe contributed to this report.