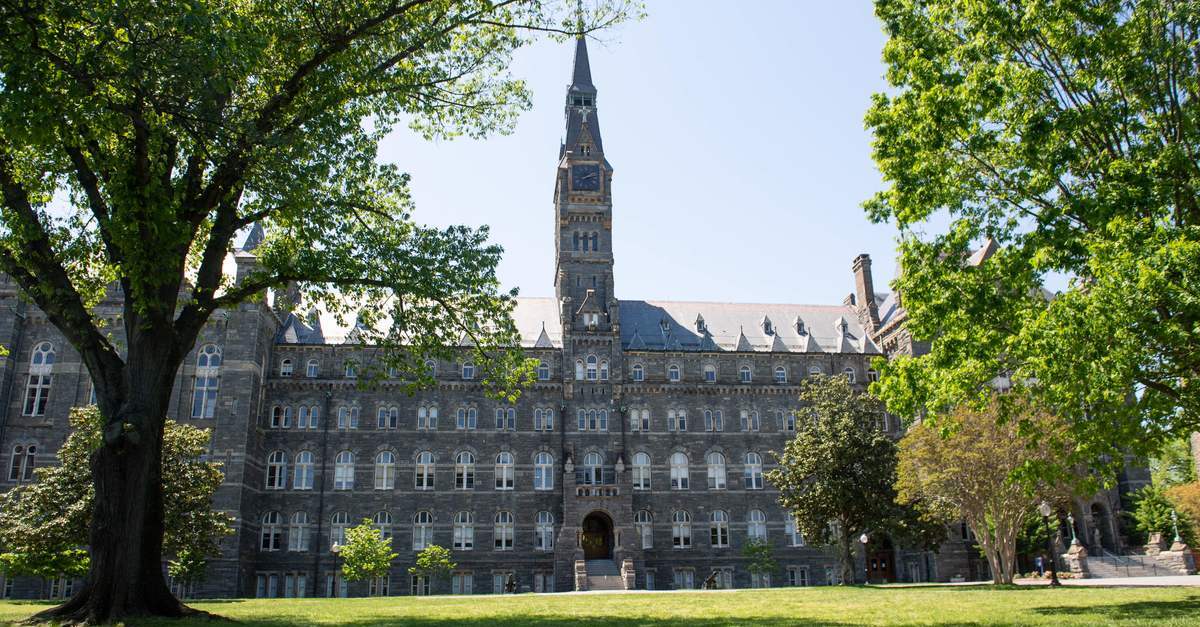 The campus of Georgetown University

A former journeyman biotech executive is the latest white collar ensnared by the ongoing college admissions scandal and prosecution by the Massachusetts U.S. Attorney’s Office.

Robert Repella, 61, was charged with conspiracy to commit mail fraud and honest services mail fraud on May 20 by way of a sealed federal indictment. On Tuesday, he pleaded guilty and the court documents were released to the public. Those documents detail a plot to have his daughter game her way into being admitted to a “highly selective private university located in Washington, D.C.”

According to the government, Repella bribed Georgetown University’s then-tennis coach Gordon Ernst in 2017 and 2018 so that he would “designate Repella’s daughter as a recruit to the Georgetown women’s tennis team, thereby facilitating her admission.”

This scheme, the indictment alleges, was “in violation of the duty of honest services Ernst owed to Georgetown as his employer.”

Federal prosecutors allege that Repella and Ernst agreed to the plan sometime during the summer of 2017. The coach would falsely allocate the executive’s daughter a tennis recruitment spot and the executive would pay the illicit fees associated with the subterfuge.

Repella reportedly said his daughter was wholly unaware of his efforts.

In August 2017, Repella made the first payment of $25,000 by check. The following month, in mid September, Repella cut Ernst an additional check for that exact same amount.

Next it was Ernst’s turn to put in the work.

“On or about November 15, 2017, Ernst sent an email to a Georgetown admissions officer listing Repella’s daughter as one of ‘[his] recruits so far’ and requesting that ‘likely letters’ be sent to his designated recruits, including Repella’s daughter,” the five-page indictment filed in the Massachusetts District Court alleges.

Prospective athlete recruits are much more likely to receive offer letters from institutes of higher education in the United States and the receipt of such a letter all but assured the biotech executive’s daughter had been admitted to the elite school.

On or about February 28, 2018, as a result of Ernst’s email, Georgetown sent Repella’s daughter a letter by United States mail noting that the Committee on Admissions had conducted an initial review of her application to the Class of 2022 and had rated her admission as “likely.” The letter explained that candidates rated “likely” have a greater than 95 percent chance of being admitted to Georgetown and that Repella’s daughter would receive a final decision by April 1, 2018.

Shortly thereafter, as a result of Ernst’s actions, Repella’s daughter was formally admitted to Georgetown.

Proceedings in the case followed almost immediately after prosecutors issued the indictment and were conducted via videoconference. Repella’s defense attorney, Robert A. Fisher, made an appearance for his client on May 21.

On Tuesday morning, Repella waived the indictment in a brief court filing before pleading guilty during a hearing before U.S. District Judge Allison D. Burroughs.

The court clerk tidily summed up the proceedings:

Colloquy with defendant regarding waiver of his right to appear in person for the hearing. Defendant waives that right and the court proceeds with the hearing by video. Defendant sworn. Colloquy with defendant regarding educational background, mental health, state of mind, nature of charges and rights, representation of counsel, plea agreement, and cooperation agreement. Govt. states elements of the offense and maximum penalties. Govt. summarizes evidence if case were to go to trial. Plea entered by Robert Repella (1) Count 1Robert Repella (1) Guilty Count 1. Court accepts plea.

Repella’s sentencing hearing is scheduled for late September. In the meantime, he will remain on personal recognizance release.

His punishment is unlikely to be particularly lengthy. The onetime star of Desperate Housewives, Felicity Huffman, admitted to paying $15,000 in order to doctor her daughter’s SAT scores within a month of being arrested and was only sentenced to 14 days in prison. She was eventually released three days ahead of schedule.