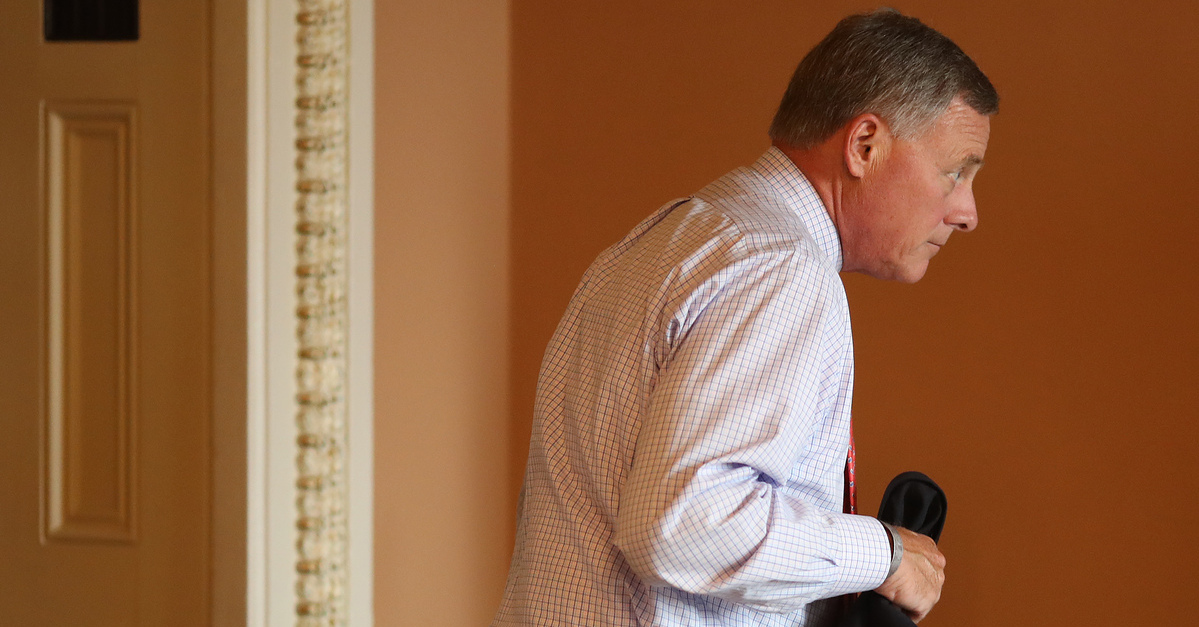 Sen. Richard Burr (R-N.C.) had several key pieces of information about the novel Coronavirus (COVID-19) weeks ago and withheld that information from the general public—but at the same time, he and his wife sold off upwards of $1.5 million in stocks that were negatively impacted by the market downturn due to the pandemic and resulting panic.

According to a federal financial disclosure form filed by Burr on behalf of himself and Brooke Burr, the couple sold off at least $581,000 worth—and up to $1.5 million worth—of stocks in major corporations that were hit particularly hard by the latest market plunge.

Those massive sell-offs occurred on February 13–just one week after writing a rosy assessment of the U.S. government’s response to the fast-spreading virus and disease in an op-ed published by Fox News and co-authored by Sen. Lamar Alexander (R-Tenn.).

Thankfully, the United States today is better prepared than ever before to face emerging public health threats, like the coronavirus, in large part due to the work of the Senate Health Committee, Congress, and the Trump Administration.

“The work of Congress and the administration has allowed U.S. public health officials to move swiftly and decisively in the last few weeks,” the two GOP senators continued.

Burr and his wife, however, quickly got to work liquidating their assets in several soon-to-be severely underwater hotel chains as well as multiple pharmaceuticals, alcohol and global data/technology stocks.

Between the Burrs’ two accounts, they sold up to $150,000 worth of stock in Wyndham Hotels & Resorts, which lost almost two-thirds of its market value since Feb. 13. They sold up to $150,000 in Extended Stay America, another hotel company that lost half its value over the last month. Burr also sold between $15,001 and $50,000 of stock in Park Hotels & Resorts, which saw its stock price drop from nearly $24 to under $5…

Congressional financial disclosures display investment amounts in wide ranges. In total, the Burrs sold seven positions worth between $50,001 and $100,000, including shares of major companies AbbVie, Centurylink and Constellation Brands.

Law&Crime previously reported on Burr providing key Coronavirus information to his wealthy donors at a Washington, D.C. lunch several weeks ago—which also did not accord with the Tarheel GOPer’s more optimistic public statements.

Here’s what the senator said, at length, on Twitter:

In a tabloid-style hit piece today, NPR knowingly and irresponsibly misrepresented a speech I gave last month about the coronavirus threat.

Let me set the record straight.

This lunch was hosted on Feb. 27 by the North Carolina State Society. It was publicly advertised and widely attended.

NPR knew, but did not report, that attendees also included many non-members, bipartisan congressional staff, and representatives from the governor’s office.

Every state has a state society. They aren’t “secretive” or “high-dollar donor” organizations. They’re great civic institutions that bring people in D.C. together for events, receptions, and lunches.

And they’re open to anyone who wants to get involved.

Like most members of Congress, I address our state society every year.

That a good thing. That’s what we should be doing.

Meeting constituents and talking to them about the work we’re doing in D.C. is an important part of our job, especially in times of uncertainty.

Unfortunately, NPR’s journalistic malpractice has raised concerns that Americans weren’t warned about the significant steps we may have to take to stop the coronavirus threat.

In a press conference on Feb. 26, the President and public health officials urged schools, hospitals, businesses, and families to begin making plans for potential closures, social distancing, and telework:

The message I shared with my constituents is the one public health officials urged all of us to heed as coronavirus spread increased:

COVID-19 is a rapidly evolving situation. To know if we’ve been successful in stemming it, we have to keep an accurate accounting of our nation’s response.

Purposefully misleading listeners for the sake of a “narrative,” like NPR has done, makes us less safe.

During his Feb. 27 luncheon remarks, Burr said this about COVID-19: “There’s one thing that I can tell you about this: It is much more aggressive in its transmission than anything that we have seen in recent history. It’s probably more akin to the 1918 pandemic.”

This was the same day President Donald Trump said, “It’s going to disappear. One day, it’s like a miracle. It will disappear.”

“[I]t could get worse before it gets better. It could maybe go away. We’ll see what happens,” Trump said.

But the late Thursday disclosures that Burr has been profiting off of the pandemic while privy to such information are yet more fuel to an already raging fire of controversy and outrage.

As intelligence committee chairman, Burr would have gotten classified briefings about the pandemic, the details of which have never been made public. We still don’t know what the intel community assessed about the potential harm and when. https://t.co/9vewnSfDC4

The legal situation here is in dispute.

“Unless they traded on inside information, which would be securities fraud, at best they’re guilty of hypocrisy,” white collar criminal defense attorney and computer law expert Tor Ekeland told Law&Crime via email.

“Senator Burr has some explaining to do, as these facts, on their face, are rather damning and clearly could implicate insider trading laws,” he said via email when asked about potential legal issues. “If there are legitimate explanations, the Senator would be well served by making those public immediately.”

“There’s no question this looks problematic and at a minimum there should be serious investigation by DOJ, SEC or a Congressional committee so that Sen Burr has to answer under oath why he all of a sudden sold this much stock,” advised former federal prosecutor and Westchester County District Attorney candidate Mimi Rocah. “Criminal insider trading cases can be difficult to prove but this is something any prosecutor worth their salt should dig into.”

A Burr aide also addressed the story about the stock sell-off, curiously saying that the sale occurring before the market collapse meant there was nothing untoward about it.

“Senator Burr filed a financial disclosure form for personal transactions made several weeks before the U.S. and financial markets showed signs of volatility due to the growing coronavirus outbreak,“ the aide told Politico in a statement. “As the situation continues to evolve daily, he has been deeply concerned by the steep and sudden toll this pandemic is taking on our economy. He supported Congress’ immediate efforts to provide $7.8 billion for response efforts and this week’s bipartisan bill to provide relief for American business and small families.”

Illegal, hypocritical or not—the prevailing opinion is that this shouldn’t be legal.

This cannot possibly be legal & if it is, CHANGE THE LAW https://t.co/ZeAesxaTge

Former White House ethics counsel Walter Shaub noted that Burr previously voted against a bill which would have made it easier to prosecute members of Congress for insider trading.