It’s Not a Done Deal Yet: DOJ Doesn’t Have the Final Word on Michael Flynn, the Judge Does 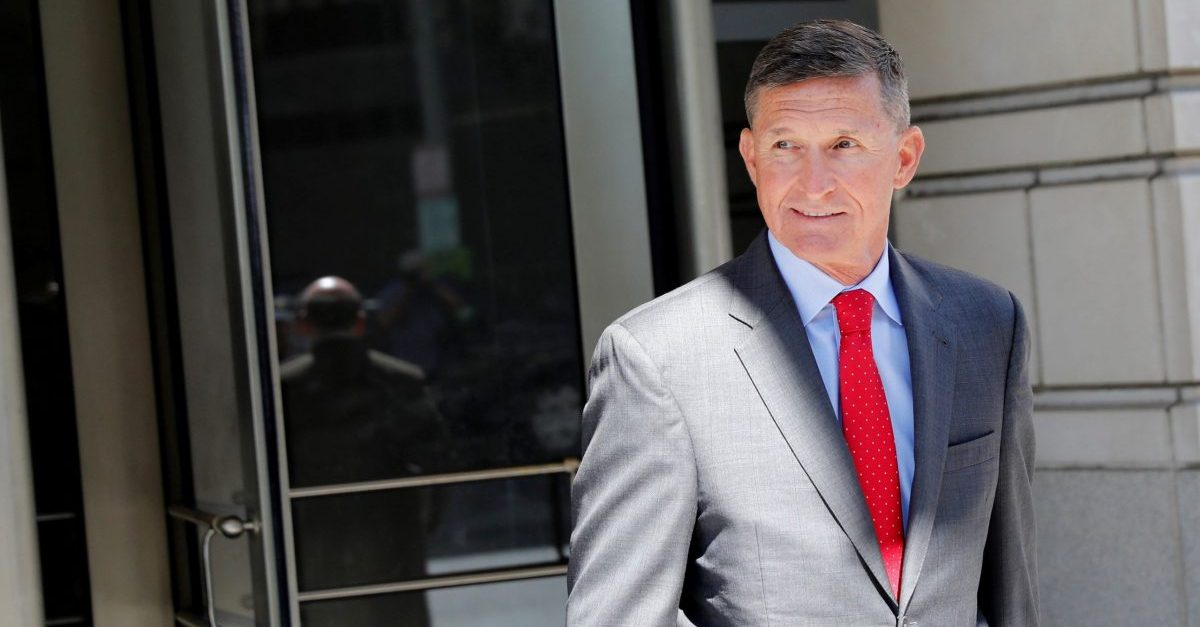 The U.S. Department of Justice’s request to U.S. District Judge Emmet G. Sullivan, a Bill Clinton appointee, to allow it to drop its case against Former National Security Advisor Michael Flynn contains a rather unique but critical procedural request: the government is seeking to dismiss Flynn’s case with prejudice. That means the government is asking the judge to toss the case in a manner that will not allow it to be brought again in the future — perhaps, hypothetically, by another administration (should Democrats take control in the 2020 election). The procedure contemplated may result in a treatment of Flynn that is better than a pardon from President Donald Trump himself.

A request for a dismissal with prejudice is rare according to former federal prosecutor Gene Rossi, now an attorney in private practice. Rossi appears regularly as a legal analyst on the Law&Crime Network.

Normally, Rossi says, federal prosecutors request to dismiss cases without prejudice. Cases dismissed without prejudice allow the government to again file charges against an individual some time down the road, so long as the statute of limitations has not expired.

In the Flynn case, the statute of limitations for lying to government officials is five years, which could, hypothetically, give a subsequent administration the chance to re-file the charges. This Department of Justice is asking, legally, to prevent that possibility (though it is admittedly a guess as to whether the fear of an election upheaval is the motivating factor).

Procedurally, the move is tricky. The DOJ is asking Judge Sullivan to dismiss the Flynn case under Federal Rule of Criminal Procedure 48(a). That rule allows a case to be dismissed “by the government,” but only “with leave of [the] court” — that’s with the permission of the judge.

Flynn’s guilty plea needs to first be withdrawn, however, and under Rule 11, pleas are supposed to be final. Under that Rule, a defendant can (relevantly to this case) only withdraw a plea after the court accepts it if he has not yet been sentenced. Flynn’s sentencing date has dragged out for months and has been delayed several times. Withdrawal before sentencing can only occur if the judge decides to reject the plea under another series of rules or if “the defendant can show a fair and just reason for requesting the withdrawal.” Otherwise, “[a]fter the court imposes sentence, the defendant may not withdraw a plea of guilty or nolo contendere, and the plea may be set aside only on direct appeal or collateral attack.”

As the Supreme Court has said several times, plea withdrawal is not a good look for the justice system as a whole:

Every inroad on the concept of finality undermines confidence in the integrity of our procedures; and, by increasing the volume of judicial work, inevitably delays and impairs the orderly administration of justice. The impact is greatest when new grounds for setting aside guilty pleas are approved because the vast majority of criminal convictions result from such pleas. Moreover, the concern that unfair procedures may have resulted in the conviction of an innocent defendant is only rarely raised by a petition to set aside a guilty plea.

Bottom line: in order for this to work as the government’s attorneys and Flynn’s attorneys apparently wish, the judge has to first agree to wipe clean Flynn’s plea under Rule 11 (at risk to the “confidence in the integrity of [court] procedures”) and then agree to jettison the case under Rule 48(a) in a way that prevents any future prosecutor from re-filing the claim.

Why do all this given the chance Trump could pardon Flynn? An old U.S. Supreme Court case may hold the answer. “[A] pardon . . . carries an imputation of guilt; [an] acceptance a confession of it.” Those words from the high court in Burdick v. United States (1915) still carry weight. A pardon would have resulted in Flynn admitting in both a plea and in a pardon that he he lied. The use of Rules 11 and 48(a) results instead in a legal maneuver which puts the onus on the DOJ’s activities and absolves Flynn. A pardon, while creating legal forgiveness from punishment, does not grant Flynn a clean slate. A plea withdrawal and a refusal to prosecute legally sullies the government’s reputation, not Flynn’s.

Not everyone is convinced that this maneuver will happen as smoothly as the prosecutors and the defendant wish.

“No one should ever try to predict what Judge Sullivan will do or how he will react,” noted national security attorney Mark S. Zaid. “I have appeared before him countless times over 25 years in cases against USGOVT. He is a very balanced jurist but you predict his reactions at your own peril.” Remember: Judge Sullivan once controversially asked prosecutors if they considered charging Flynn with treason. Sullivan apologized for that.

Still, Sullivan made clear how he felt about Flynn’s conduct.

“I’m not hiding my disgust, my disdain, for this criminal offense,” Sullivan added.

Yet Rossi, the former prosecutor, said something akin to legal lunacy would predictably occur if the judge forces the case to continue.  Were the judge to order the case to proceed, the prosecution would likely not call witnesses or even show up to court. And, that would be ridiculous. Rossi called the procedural moves a de facto “back door pardon” for Flynn.

The government outlined its rationale for seeking dismissal with prejudice. Part of it reads as follows:

The Government is not persuaded that the January 24, 2017 interview [with Flynn] was conducted with a legitimate investigative basis and therefore does not believe Mr. Flynn’s statements were material even if untrue.  Moreover, we not believe that the Government can prove either the relevant false statements or their materiality beyond a reasonable doubt.

You can read the rest of the document below—exhibits included.

Flynn motion to dismiss by Law&Crime on Scribd