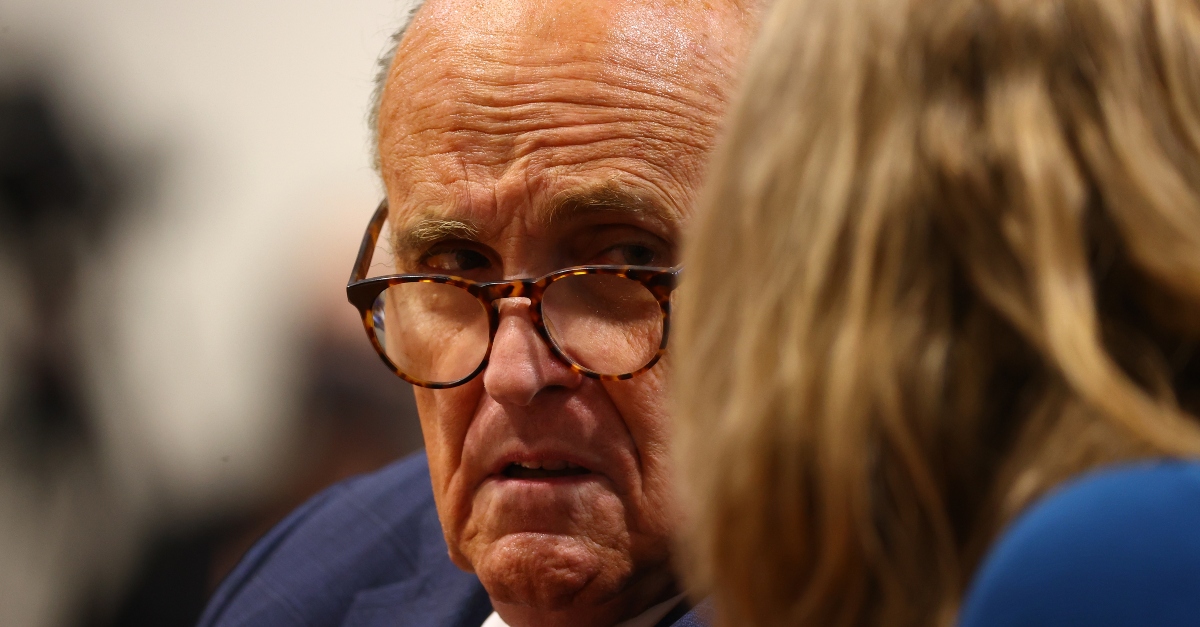 A little more than three years ago, federal authorities raided the home of then-President Donald Trump’s lawyer and fixer Michael Cohen in a move that led to protracted proceedings in the Southern District of New York scrutinizing issues of attorney-client privilege. Everything old became new again on Tuesday, when an unsealed filing revealed that prosecutors plan to chart a similar course for Trump’s sometime lawyer Rudy Giuliani.

The parallels between the two events were not lost on national security lawyer Bradley Moss.

In a five-page memo unsealed on Tuesday, prosecutors wrote that “unusually sensitive privilege issues” tied to the case signals the need for the appointment of a special master to sort out those issues.

“In particular, the overt and public nature of these warrants necessitates, as Judge [Kimba] Wood observed, the appointment of a special master for the ‘perception of fairness, not fairness itself,'” the government’s brief states, referring to the presiding judge over Cohen’s discovery battle.

In “light of the parallels” between the two cases, the brief indicates, the government explicitly envisions the process playing out similarly to the Cohen matter:

One of the Assistant U.S. Attorneys on the case is Nicolas Roos, who argued for the government on the day Cohen was sentenced to three years in prison. Cohen was later released to home confinement amid the COVID-19 pandemic.

In yet another rhyming of history, Giuliani—like Cohen—has been said to have sought Trump’s funding for his legal defense, the New York Times reported.

The thorniness of the attorney-client privilege issues may be compounded by the fact that prosecutors want the special master to scrutinize materials by two Trump-linked lawyers: Giuliani and Victoria Toensing, a conservative attorney and TV personality whose electronic devices were also seized.

Toensing represented indicted Ukrainian oligarch Dmytro Firtash, who along with Giuliani was reportedly linked to the scheme to gin up political dirt on then-candidate Joe Biden, in a scandal the led to Trump’s first impeachment.

The government said that it obtained the warrant for Toensing on April 22 and seized those devices on April 28, the same day the Giuliani warrants were executed. Politico reported that Toensing is not a focus of the probe.

The FBI agents who executed those warrants “have not been involved in this investigation and will not be involved in it going forward,” prosecutors say.

“Technical specialists with the FBI have begun to extract materials from the seized devices, but the review of those materials has not begun,” their legal brief continues.

U.S. District Judge J. Paul Oetken, a Barack Obama appointee, gave Giuliani and Toensing until May 10 to reply to the government, which will respond to their filings a week later.

No public hearings have yet been scheduled.

Giuliani’s lawyer Robert Costello, who attacked prosecutors in a combative public statement for his client, is copied on the government’s letter.