‘The Single Dumbest ‘Legal Take’ of All Time’: Charlie Kirk Calls for Supreme Court to Get Trump Back on Facebook 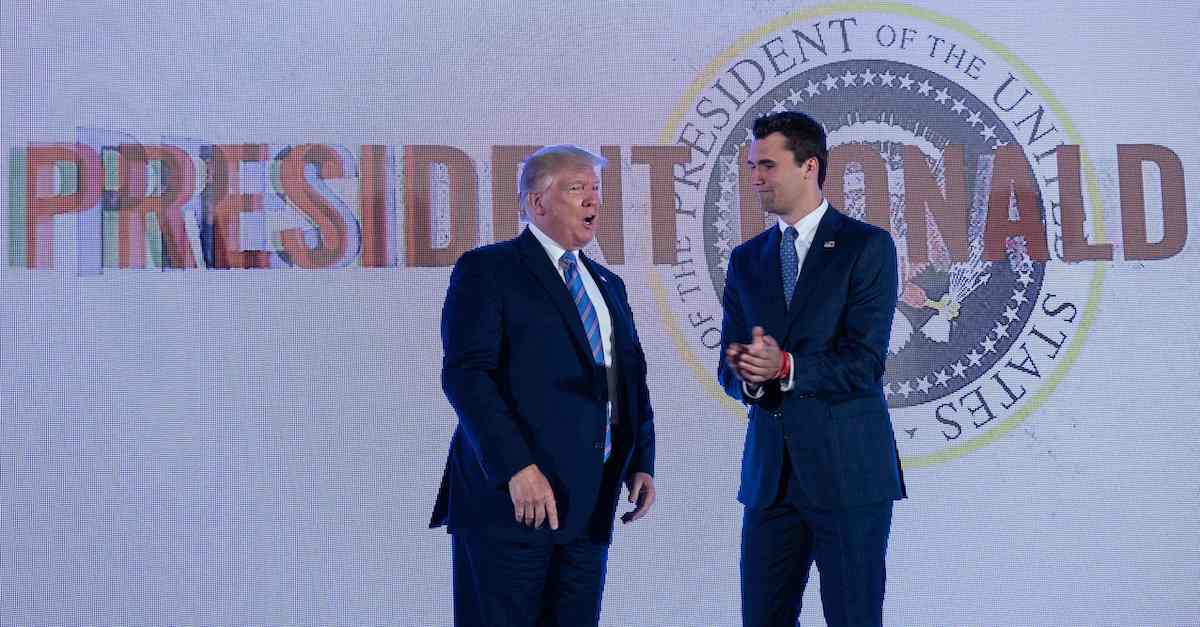 Staunch Donald Trump ally and right-wing activist Charlie Kirk responded to the Facebook Oversight Board decision on Wednesday to uphold Trump’s ban from the social media platform by saying that the Supreme Court of the United States should intervene and get Trump back on Facebook.

In case you missed it, the Board upheld Facebook’s Jan. 7 suspension of Trump for glorifying violence in the aftermath of the Jan. 6 siege.

The Board found that the two posts by Mr. Trump on January 6 severely violated Facebook’s Community Standards and Instagram’s Community Guidelines. “We love you. You’re very special” in the first post and “great patriots” and “remember this day forever” in the second post violated Facebook’s rules prohibiting praise or support of people engaged in violence.

What the Board did not approve of was the open-ended and indefinite way in which the former president of the United States was banned.

“It is not permissible for Facebook to keep a user off the platform for an undefined period, with no criteria for when or whether the account will be restored,” the Board’s findings said.

As a result, the Board said Facebook must complete a review to “determine and justify a proportionate response that is consistent with the rules that are applied to other users of its platform.” That review must occur “within six months of the date of this decision.”

For Charlie Kirk, this is a problem for the justices to solve.

The US Supreme Court should overturn the Facebook’s “Oversight Board’s” “ruling” which upholds the outlawing of the 45th President of the United States from social media.

This is a big tech, corporate oligarchy without standing and it’s gone too far. Enough is enough.

“The US Supreme Court should overturn the Facebook’s ‘Oversight Board’s’ ‘ruling’ which upholds the outlawing of the 45th President of the United States from social media,” Kirk tweeted, urging the highest court in the land to force Facebook to host speech Kirk prefers. “This is a big tech, corporate oligarchy without standing and it’s gone too far. Enough is enough.”

The reaction to this tweet was what you would expect. Some legal observers branded the tweet as “the single dumbest ‘legal take’ of all time.” Others mocked it by sarcastically offering their own grievances for the Supreme Court to solve. Still others simply noted that this is not how any of this works.

Yeah they’ll get right on that https://t.co/QH5wqIhqLG

That’s not how any of this works https://t.co/HupmC2z3mS

This is the single dumbest "legal take" of all time. https://t.co/zh2zENZQl6

The US Supreme Court should order companies to make a bacon package you can open easily https://t.co/6sUoatXMGS

The US Supreme Court should overturn Stephen Strasburg's shoulder injury, which hampers the Nationals' pitching staff.

This is a big injury without standing and it's gone too far. Enough is enough. #TheSupremeCourtShould https://t.co/GRX5ZzLVvz

It’s neither outlawing nor oligarchy. What you seek is government takeover of private enterprise, comrade. https://t.co/9bZzBjdViS

ON PETITION FOR WRIT OF CERTIORARI TO THE FACEBOOK OVERSIGHT BOARD

The Board issued its judgment on May 5, 2021. Pet. App. 1a. The jurisdiction of this Court is invoked under 🤷‍♂️. https://t.co/XGBxVYz8LW

This is not how it works. https://t.co/6jDDlMg4Tw

Charlie Kirk knows exactly as much about appeals as Candace Owens does about German history. https://t.co/5njEhuQ0gW

The US Supreme Court should overturn my family’s “Oversight Board’s” “ruling” which prohibited me from watching all eight The Fast and the Furious movies in one sitting.

This is a big familial oligarchy without standing and it’s gone too far. Enough is enough. https://t.co/sGLI0wVKaf

Thomas dissents from the denial of cert https://t.co/PZbBsAWEvk

I wish I had a nickel for everything that qualifies for @BadLegalTakes https://t.co/rYzFKdUEUG