In ‘Giant Step’ for Animal Rights, New York’s Highest Court Will Hear Habeas Corpus Case on Behalf of Happy the Elephant, Who Lives Alone at the Bronx Zoo 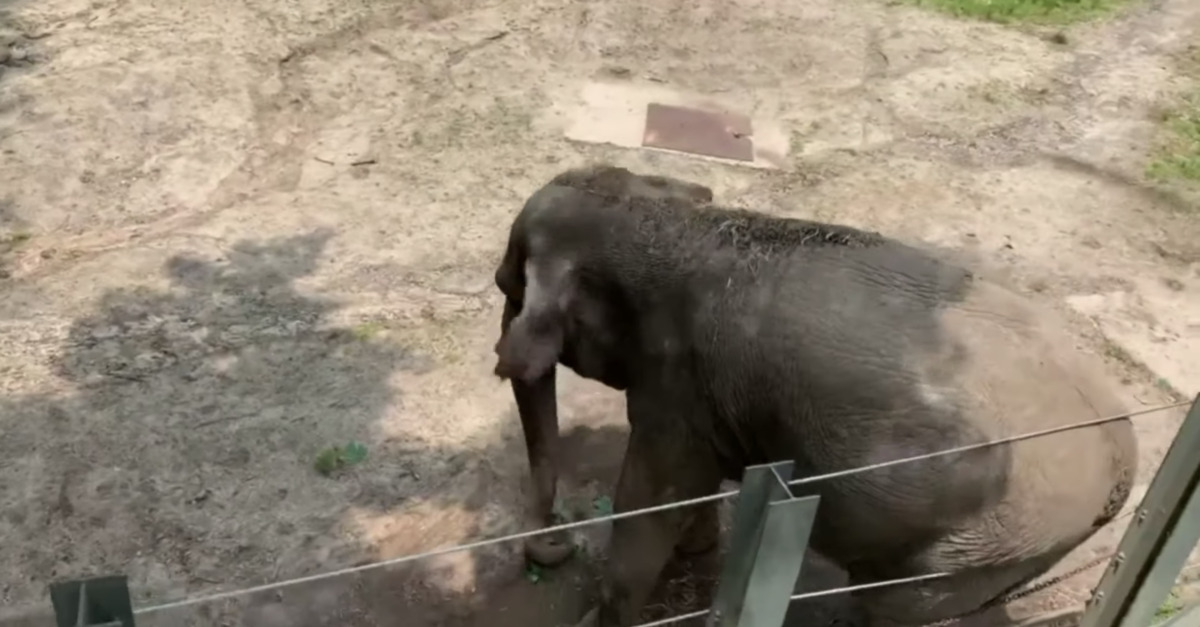 The New York Court of Appeals–the highest court in the Empire State–agreed to hear a major animal rights case on Tuesday.

In an orders list detailing various recent decisions, the court dispensed with several motions brought by The Nonhuman Rights Project and agreed to hear the habeas corpus case of Happy the elephant, who has been caged at the Bronx Zoo since 1977.

Her advocates insist she’s aware of the lonely state she’s in and note that Happy was the first elephant to ever “pass” the mirror self-recognition test, which zoological and psychological experts consider a reliable indicator of self-awareness.

“Kidnapped as a baby from the community of elephants in which she was evolved to thrive, she has been imprisoned ever since in an unnatural and unhealthy environment for the sole purpose of human profit.” attorney Elizabeth Stein writes in the appellate motion. “An ‘involuntary actor in the theater of human law,’ she has been stripped bare by that law of her autonomy, her social relationships, her emotional well-being, and every other thing that makes the life of this extraordinarily cognitively complex being worth living.”

“This is one small step for an elephant named Happy, one giant step for the animal kingdom,” Harvard Law Professor Emeritus Laurence Tribe, who submitted an amicus brief in the case, said via Twitter.

Tuesday’s decision marks the first time ever that the highest court in any English-speaking jurisdiction will hear a habeas corpus case for a nonhuman creature.

Attorneys for the animal rights law firm have been litigating on the elephant’s behalf since 2018 when they filed for a common law writ of habeas corpus in the New York Supreme Court, Orleans County.

That original petition demanded recognition of legal personhood and fundamental right to bodily liberty for the “autonomous” pachyderm “[who is] being unlawfully imprisoned solely because she is an elephant.” Attorneys also demanded that Happy be removed from the zoo, where she lives in something akin to isolation, and allowed to live the rest of her life in an elephant sanctuary.

The 50-year-old elephant has been living alone at the zoo for years and attorneys say her “case will turn on whether an extraordinarily cognitively complex” nonhuman animal has legally cognizable rights and protections under the ever-shifting New York common law.

This dynamic jurisprudence, which has often been instrumental to other courts across the country, “keeps abreast of evolving standards of justice, morality, experience, and scientific discovery and an evolving New York public policy which already recognizes certain nonhuman animals as ‘persons,'” the petition notes–citing a 2018 concurring opinion regarding the rights of chimpanzees authored by Court of Appeals Associate Justice Eugene Fahey.

“In November, the exhibit closed for the winter, with Happy held in an industrial cement structure lined with windowless, barred cages,” the group noted in a press release earlier this year. “Happy made history in 2005 as the first elephant to demonstrate self-awareness via the mirror test, and in December of 2018 she became the first elephant in the world to have a habeas corpus hearing after the Orleans Supreme Court issued the [Nonhuman Rights Project’s] requested habeas corpus order. In early 2019, the Orleans Supreme Court transferred her case to the Bronx.”

The Bronx County Supreme Court ruled against the effort to secure Happy’s legal personhood and freedom in early 2020–leading to the current appeal before the highest court in New York State.

“This marks the 24th judge in New York to rule against [the Project] as it attempts to advance its agenda to extend human protections to animals,” Bronx Zoo Director Jim Breheny, the named defendant in the case, said last year. “In this case, [animal rights attorneys] tried to use the common law writ of habeas corpus, an important legal protection for unlawfully imprisoned human beings. [The Project’s] continued failed attempts to grant habeas corpus to animals demeans all the people who have sought such relief. This is the fifth case [the Project] has lost seeking legal personhood for animals.”

This time, however, the attorneys hope will be different.

Their legal analysis admits that the issue is novel and offers various arguments to advance Happy’s rights under the law–including the idea that social contracts do not create persons but citizens and that “all individuals are born with certain natural rights.”

“Happy’s case has been supported from the start by leading scientists, philosophers, habeas corpus scholars, legal experts, theologians, and the wider public throughout the country and the world,” the Nonhuman Rights Project said in a press release hailing the court’s decision. “Having begun the fight for nonhuman rights in New York eight years ago, we are thrilled the Court of Appeals has recognized the urgent public importance of Happy’s case and hope she will soon become the first elephant and nonhuman animal in the US to have her right to bodily liberty judicially recognized.”

Both the original petition and the lengthy appellate motion cite Judge Fahey’s 2018 concurrence at length in support of Happy’s writ:

The issue whether a nonhuman animal has a fundamental right to liberty protected by the writ of habeas corpus is profound and far-reaching. It speaks to our relationship with all the life around us. Ultimately, we will not be able to ignore it.