Asking a Judge to Unseal Files, Rudy Giuliani’s Lawyers Demand Explanation for ‘Extremely Damaging’ Claim That He Might Destroy Evidence

Rudy Giuliani’s lawyers asked a federal judge on Monday to unseal the affidavits supporting the search warrant on his electronic devices and demanded an explanation for prosecutions’ claim that the former mayor and counsel for Donald Trump may have destroyed evidence if he knew the government was on his trail.

“In addition, in the original warrant for the iCloud account, there is a non-disclosure order based upon an allegation made to the issuing Court, that if Giuliani were informed of the existence of the warrant, he might destroy evidence or intimidate witnesses,” Giuliani’s lawyer Robert Costello wrote in a 17-page letter to the judge unsealed on Monday. “Such an allegation, on its face, strains credulity. It is not only false, but extremely damaging to Giuliani’s reputation. It is not supported by any credible facts and is contradicted by Giuliani’s efforts to provide information to the Government. We should be allowed to question the Government as to what basis it had, if any, to make that assertion.”

Giuliani’s lawyers claim that the prosecutors’ method of gleaning the evidence prejudiced both the former mayor and Trump.

“Unfortunately for Giuliani, and even more unfortunately for the attorney-client privilege and executive deliberation privilege, and the public’s perception that those privileges are real, the SDNY simply chose to treat a distinguished lawyer as if he was the head of a drug cartel or a terrorist, in order to create maximum prejudicial coverage of both Giuliani, and his most well-known client – the former President of the United States,” the letter continues.

Giuliani’s response to that request was due last week, but his May 12 legal brief was unsealed in redacted form on Monday. It appears to confirm earlier reports in the Daily Beast that prosecutors tapped into Giuliani’s iCloud via a “covert warrant” in 2019.

“We initially raise our serious concern over the broad and sweeping nature of the searches executed on an attorney’s home and law office, and the covert search and review of the same attorney’s iCloud account in 2019, and then, the failure to give notice to Giuliani and his clients, and withholding information about that search for 18 months,” the letter states. “During that period the government unilaterally reviewed all the information, privileged and not, and made entirely uninformed decisions about privilege (without any input from the clients or their counsel). This was during a period when the President was under investigation by that very office and the Justice Department of which they are an integral part.”

Giuliani’s team is now challenging the earlier warrant, from the time he was representing Trump.

“We request that this Court grant access to the material gathered in 2019, which was reviewed by the government’s secret ‘Taint Team’ and determined by them, without judicial supervision, to be non-privileged, responsive and relevant,” their letter states. “After our review, we expect to be able to expand our argument that this unilateral, secret review was illegal and should be deterred in the future by suppression of any evidence considered, and also any information obtained as fruit of this poisoned tree.”

The former mayor’s lawyers note their offers of cooperation were “so open and notorious that Giuliani’s counsel made a statement saying exactly that on national television” to CNN’s Chris Cuomo on Nov. 25, 2019, embedding a screenshot from that broadcast as an exhibit. 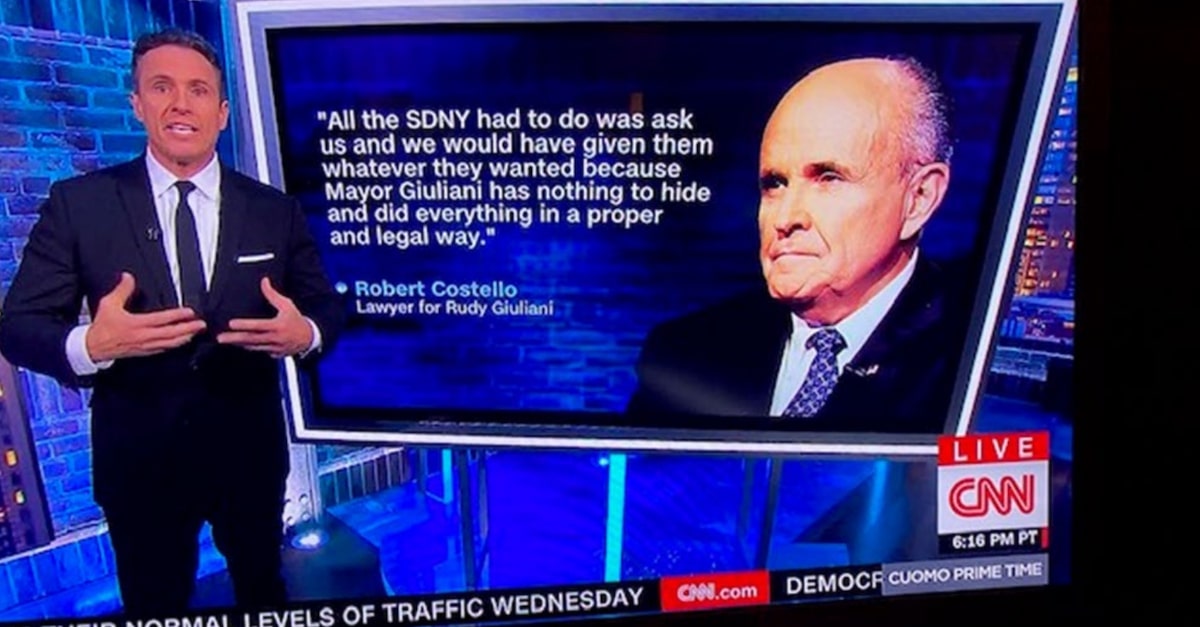 CNN’s Chris Cuomo broadcasting a statement by Rudy Giuliani’s legal team, an image attached as an exhibit in the former mayor’s privilege fight.

Giuliani’s lawyers appear to confirm accounts the Trump’s Department of Justice stalled the Southern District of New York’s efforts to pursue the investigation, denying two requests to retrieve his electronic devices. This reportedly fell as part of a pattern of former Attorney General Bill Barr’s pattern of interfering in investigations that embarrassed Trump of his allies.

“After two failed attempts, the SDNY learned its lesson,” their letter states. “Now, they waited until the Biden administration was in office and more particularly, senior members of the Justice Department had been removed and replaced by Biden appointees. The SDNY went back to the Department of Justice for its third attempt to seek permission to seek their ‘do-over’ application for a search warrant and this time they were apparently successful, for they then approached this Court seeking warrants to search Mayor Giuliani’s apartment and law office.”

The thorniness of the attorney-client privilege issues may be compounded by the fact that prosecutors also want the special master to scrutinize materials related to another covert warrant for Victoria Toensing, a conservative attorney and TV personality whose electronic devices were also seized.

Toensing represented indicted Ukrainian oligarch Dmytro Firtash, who along with Giuliani was reportedly linked to the scheme to gin up political dirt on then-candidate Joe Biden, in a scandal the led to Trump’s first impeachment. Firtash, who is indicted on unrelated bribery allegations, denies the charges against him.

A former U.S. Attorney for the same office apparently treating him as a target, Giuliani is also represented by Arthur Aidala, Barry Kamins, John M. Leventhal, and Michael Jaccarino.

Listen to Law&Crime’s podcast “Objections: With Adam Klasfeld” for more information about the Giuliani investigation: