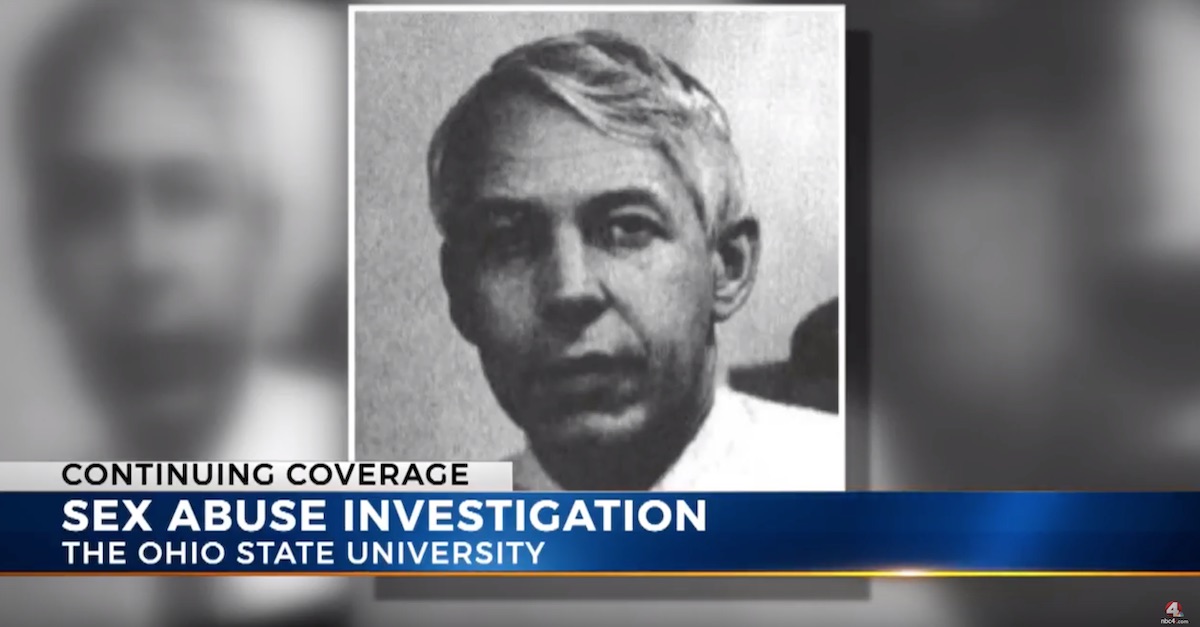 Another 36 former student athletes filed a lawsuit against Ohio State University on Wednesday. The suit alleged that university officials “aided, abetted, and actively concealed” the abuse they suffered at the hands of Dr. Richard Strauss while he was a physician at the OSU. Michael DiSabato—who had previous come forward with his own story of abuse—is the lead plaintiff with an additional 36 unnamed John Does.

The suit said OSU “funneled Plaintiffs and other student-athletes to Strauss with assembly-line efficiency, whereupon Strauss cornered and sexually assaulted them. He sexually assaulted/abused most of the Plaintiffs more than once, and some wrestlers between 20-50 times.”

According to the plaintiffs, OSU violated Title IX by failing to respond to allegations of Strauss’ abuse. The complaint alleged that Strauss molested victims during physicals. Strauss would fondle or grope their genitals and asked whether they liked it, the suit claimed.

Strauss allegedly “took an extended amount of time with each patient” and “examined his patients in a room with the door closed.”

“Hernia checks often took several minutes. Some Plaintiffs, however, remember Strauss checking inspecting and fondling their genitals for ten or fifteen minutes. A line would form outside of Strauss’ exam room as the athletes completed the other stations and anxiously waited for Strauss to exam them,” the documents said.

These exams  allegedly became “rather notorious” and “at least one team head coach requested that someone other than Strauss conduct the hernia checks for team physicals.”

The lawsuit listed the medical excuses Strauss allegedly made for his actions:

When Plaintiffs asked Strauss why he was massaging their genitals and probing their rectums, he came up with many different medical explanations. Hernia and lymph node checks were the most common explanations. Sometimes, Strauss placed his face so close to his patients that they could feel his breath on their genitals. Sometimes he had them stand on tables so his head was at crotch height. Other times he had them sit on a bench and spread their legs; he would then roll across the floor on a wheeled stool and stick his face deep between their legs to perform his exam. Sometimes Strauss would don a headlamp and turn off the room lights before putting his head inches away from patients’ penises. When one Plaintiff asked Strauss to explain the room lights off/headlamp behavior, Strauss said he was checking for skin rashes and STDs. He assured the Plaintiff that this technique allowed him to perform the best possible examination for those kinds of problems.

Michael Wright, an attorney for the plaintiffs, said that his clients were not contacted by the law firm Perkins Coie when they investigated the university’s role in Strauss’s alleged systemic sexual abuse.

A report released earlier this month found that Strauss abused 177 male students while he was a physician at the Athletics and Student Health departments. Strauss would conduct genital examinations that were “unusually prolonged” and it was “broadly known” within the Athletics Department that Strauss showered alongside male students—which led students to “repeatedly” complain about the behavior to their coaches. No “meaningful action” was taken by the school until 1996.

That year, a student accused Strauss of “fondling him during a genital examination.” The university suspended him and took up a “very limited investigation” of Strauss’s complaint history. Although Strauss was permanently removed from the Athletics and Student Health department, he was allowed to keep his tenure as a faculty member. After he was removed, Strauss allegedly opened a “private, off-campus ‘men’s clinic’ where he continued to sexually abuse OSU students”:

During this period, Strauss persisted in protesting his removal from Athletics and Student Health to the various University officials. Despite these efforts, Strauss was ultimately told in October 1997 that the University would not consider reinstating him as a physician in Athletics or Student Health. Shortly thereafter, Strauss determined that he would retire from the University. Upon his voluntary retirement on March 1, 1998, Strauss received the “emeritus” honorific from OSU, which her maintained until his death in 2005.

Spokesman for OSU Ben Johnson referred comment back to a previous statement that university president Michael V. Drake wrote at the time of the Perkins Coie report came out.

“On behalf of the university, we offer our profound regret and sincere apologies to each person who endured Strauss’ abuse,” Drake wrote in that statement. “Our institution’s fundamental failure at the time to prevent this abuse was unacceptable — as were the inadequate efforts to thoroughly investigate complaints raised by students and staff members.” He added, “this independent investigation was completed because of the strength and courage of survivors. We thank each of them for their willingness to share their experiences.”