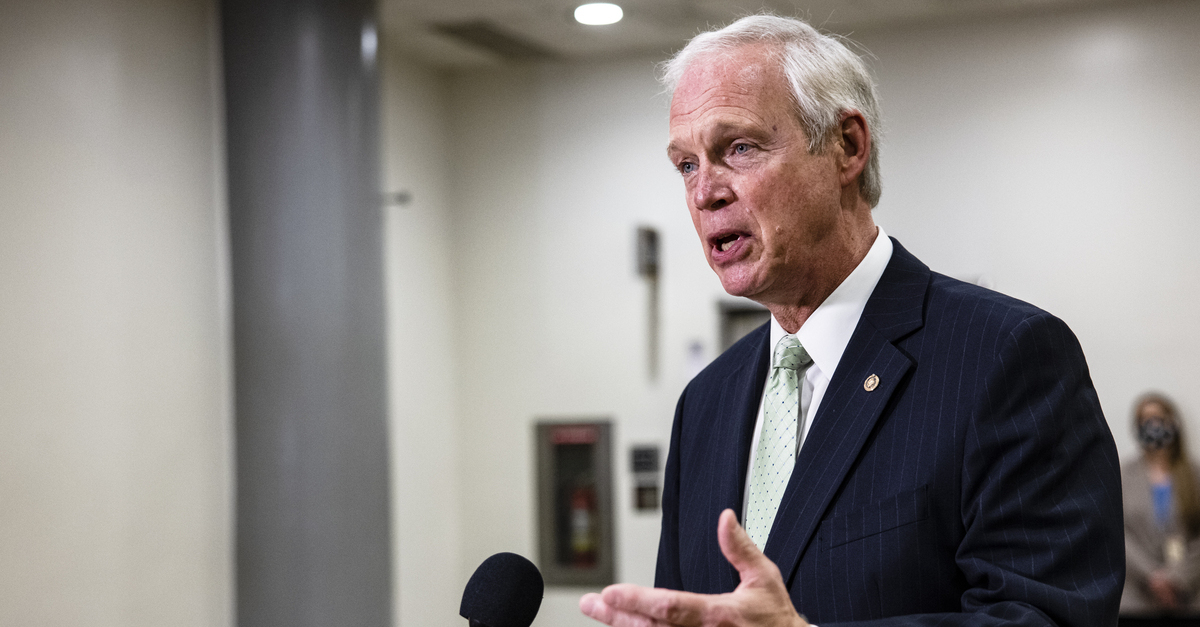 Senator Ron Johnson (D-Wisc.) answers questions from reporters in the Senate subway during a break in the fourth day of the Senates second impeachment trial of former President Donald Trump at the U.S. Capitol on February 12, 2021 in Washington, DC.

Sen. Ron Johnson, a Wisconsin Republican who has repeatedly gone to bat for former president Donald Trump before and after the election, went so far as to seemingly to deny the existence of an armed insurrection in a series of ruminations regarding the U.S. Senate’s acquittal of the 45th president on incitement charges on a conservative radio program on Monday afternoon.

Near the end of a lengthy interview, WISN host Jay Weber turned the conversation toward the Green Zone-like presence of troops and security theater in the nation’s capital following the Jan. 6 pro-Trump insurrection that resulted in the loss of five lives.

“I’ve called for the removal of the fence,” Johnson said near the end of the interview, before predicting that what he was about to say might get him “in trouble” but that he didn’t care.

“There were groups of agitators that were the tip of the spear that caused that,” Johnson said of the attack. “Not the tens of thousands of Trump supporters that would never even contemplate that.”

“The fact of the matter is this didn’t seem like an armed insurrection to me,” he continued. “I mean, armed, it—when you hear ‘armed,’ don’t you think of firearms?”

“If that was a planned, armed insurrection then you have, really, a bunch of idiots,” Johnson added—noting that he was only aware of one gun being used during the riot within the U.S. Capitol Complex and that the gun in question was used by a Capitol Police officer.

With prosecutors estimating some 140 assaults on police officers during the siege, some of the most high-profile of the hundreds of cases have featured allegations involving weapons.

Texans Ryan Taylor Nichols and Alex Kirk Harkrider are accused of bringing weapons into the U.S. Capitol Building. New Yorker and alleged rioter Samuel Fisher is said to have brought guns to Washington, D.C. on the day in question—but not to the Capitol itself. Pennsylvania man Peter Schwartz allegedly sprayed police with a “chemical irritant” believed to be law enforcement-grade pepper spray. Then there’s Alabama-based Lonnie Coffman, who allegedly traveled to the nation’s capital with an assault rifle, thousands of rounds of ammunition, a crossbow and multiple Molotov cocktails. The impeachment trial called attention to the stun gun in the pants of Richard “Bigo” Barnett, who gleefully posed with his foot on a desk in House Speaker Nancy Pelosi’s office. In all, some one dozen guns have been recovered from alleged rioting suspects, and two suspects—Eric Munchel and Larry Brock—earned the nickname “zip-tie guys” for holding tactical restraints foraged from the scene.

During the broadcast, Johnson also accused congressional Democrats of “grotesque and shameful hypocrisy” for calling attention to the violence caused by the pro-Trump mob due to some Democrats’ previous support for the Black Lives Matter movement.

“We are aware of their hypocrisy,” he said. “We know who is talking to us about and saying how important police officials are when their side is the one been saying ‘Defund the Police.'”

The conservative senator went on to blame Democrats for the failure to convict the former president while praising Trump’s impeachment team for blowing the Democratic Party’s case “out of the water.”

“They eviscerated them legally,” he said.

“My point is, if you’re talking about incitement, talk about the incitement over the last four years,” Johnson explained. “If we really went down that path of witnesses, the trial itself was incitement, extending it through witnesses would have been further incitement.”

Johnson did have some praise for the Democratic impeachment managers—comparing them favorably against Rep. Adam Schiff (D-Calif.) who led the first impeachment effort against Trump during the 2019-2020 scandal.

“The House managers had all of this information I didn’t have access to,” Johnson admitted. “I actually learned a lot during the presentation, so I actually appreciated the presentation. I hadn’t seen that video. I had no idea that the breach occurred real close to the Senate chamber. I thought it happened more over on the House side because it was certainly more intense over on the House side.”

Still, the Wisconsin Republican was unconvinced by the presentation and repeatedly criticized Democrats for airing several hours of video footage.

Johnson explained that his own thoughts during the Capitol Hill siege didn’t align with the dire picture painted by House impeachment managers.

“I never felt threatened,” he said. “I didn’t foresee this. It’s one of the—again, they made up their own standard for what’s incitement. And the first question was: ‘Was this predictable? Was this foreseeable?’ And the answer is, no, it wasn’t. I don’t know any Trump supporters that would do that. I don’t.”

The Wisconsin Republican went on to say that he would have been scared if the rioters were supporters of President Joe Biden.

“I wasn’t afraid going into January sixth that there were going to be riots,” he said. “Now, had the tables been turned, if that would have been tens or hundreds of thousands of Biden supporters out there, the people who had been rioting in the streets all summer long, I’d have been a little more concerned about security, but I wasn’t.”