2 Men Who Brought Restraints into Senate During D.C. Insurrection Have Been Arrested: Authorities 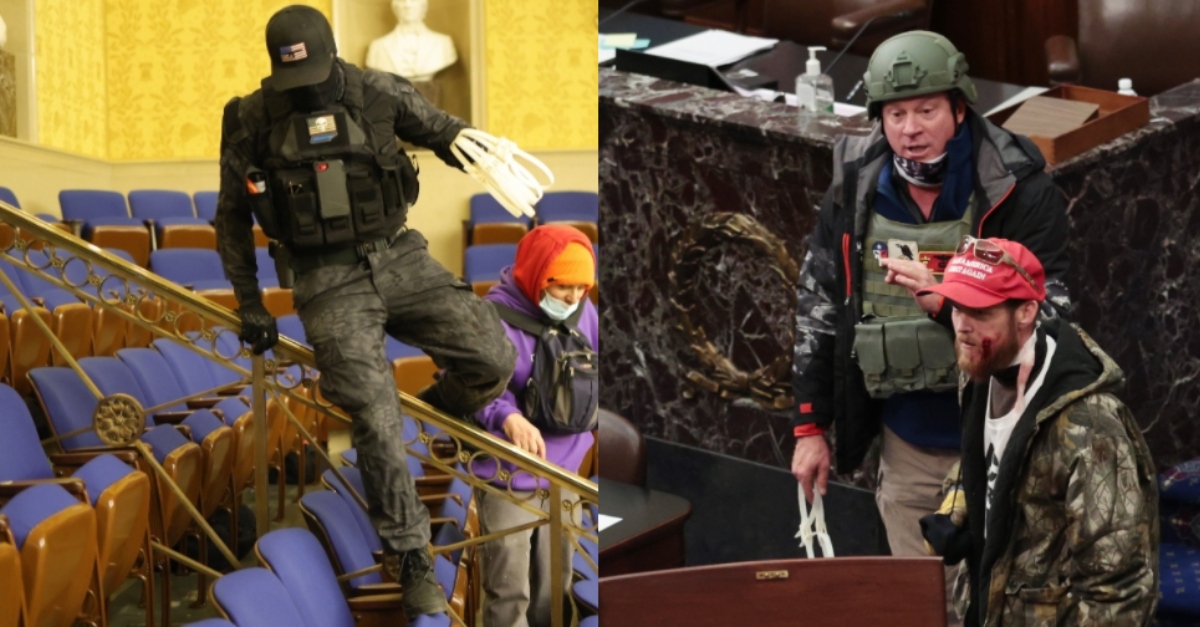 The United States Department of Justice announced on Sunday that they’ve charged two men in connection to the insurrection at the Capitol Building. Both defendants possessed restraints, said prosecutors. One of them allegedly had a taser when authorities encountered him.

They are Tennessee resident Eric Gavelek Munchel, and Texas man Larry Rendell Brock. Authorities say these are among the men seen on disturbing photos from Wednesday. That’s supposed to be Munchel running around with zip ties while masked on the Senate floor. He’s the individual who allegedly possessed a taser. Brock’s face is more visible, and he is wearing a combat helmet. Their names have been floating around social media for a couple of days. The New Yorker reported on his involvement on Saturday. He is an Air Force vet.

Releasing his name now after 24h of collaboration w/@RonanFarrow & his investigations team to confirm.https://t.co/nog9HI7DzX pic.twitter.com/ClHImsFucM

Authorities say that Munchel had plastic restraints, an item with a holster on his right hip, and a cell phone mounted on his chest to record everything. He is charged with knowingly entering or remaining in any restricted building or grounds without lawful authority and one count of violent entry and disorderly conduct on Capitol grounds.

Brock had a green helmet, a tactical vest, a black and camo jacket, and beige pants with a white flex cuff. Prosecutors noted that this flex cuff is used by law enforcement to restrain and detain people.

He said in the New Yorker that he just found the zip-tie handcuffs lying around and wanted to give them to the next officer he could find.

“I wish I had not picked those up,” he said. “My thought process there was I would pick them up and give them to an officer when I see one. . . . I didn’t do that because I had put them in my coat, and I honestly forgot about them.”

In the affidavit against him, authorities said they were able to identify him thanks to a tipster: his ex-wife. She recognized him from a picture of the insurrection.

“I just know that when I saw this was happening I was afraid he would be there. […] It is such a good picture of him and I recognize his patch,” she told FBI, per court doc w/ pics pic.twitter.com/EkMXJag6Iv

Investigators also cited another witness who stepped forward, and identified Brock in a picture.

“It looks like him and he has pilot wings on his chest in this picture,” this person said. “He was an A-10 pilot. Worked at L3, and he still has contacts that work with L3 that knew he was flying to Washington DC.”

It is unclear if either defendant has an attorney in this matter. Authorities say that the Counterterrorism Section of the DOJ’s National Security Division is involved in the prosecution.

The ATF and FBI continue to urge the public to report suspected use of explosive devices, or violent, destructive acts associated with the recent unrest. Anyone with information can call 1-888-ATF-TIPS (1-888-283-8477), email [email protected] or submit information anonymously via ReportIt.com

The FBI is looking for individuals who may have incited or promoted violence of any kind. Anyone with digital material or tips can call 1-800-CALL-FBI (800-225-5324) or submit images or videos at fbi.gov/USCapitol

You can read the affidavit in the Brock case here:

Affidavit for Larry Rendell Brock by Law&Crime on Scribd

Update – 7:35 p.m.: We added the affidavit against Brock and included some of the details in the body of the article.