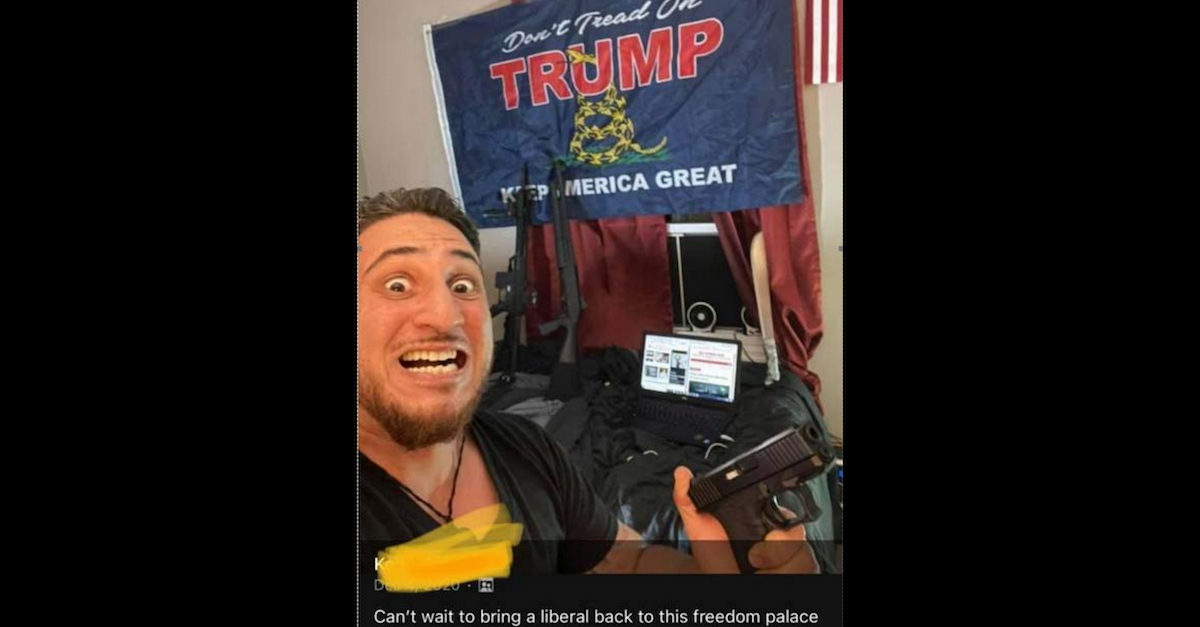 Hours after the end of Donald J. Trump’s presidency, the U.S. Capitol siege prosecutions resumed with the charging of one of his gun-toting backers with a website awash in antisemitic, conspiratorial and extremist imagery. A federal judge denied bail following a hearing this afternoon filled with details about the firearms and bullet-proof vests found in his Manhattan home and car.

The FBI found those those weapons and tactical gear when arresting Samuel Fisher at 8 a.m. Eastern Time, around the time that Trump delivered his farewell remarks.

Prosecutors would unseal those charges later in the day, leading to an afternoon hearing where prosecutors described Fisher as a flight risk and danger to the community.

“Defendant doesn’t just have the ability to flee,” Assistant U.S. Attorney Benjamin Schrier said, in arguing that Fisher should be kept on a tight leash. “He has places to go outside this district.”

On Jan. 6, Samuel Fisher posed for a photograph in front of a riff of the Gadsen flag reading: “Don’t Tread on TRUMP,” with a snake presenting its teeth and coiled over the words “KEEP AMERICA GREAT.”

Fisher clenched his face and mouth just like that snake while holding a gun and posting the words “Can’t wait to bring a liberal back to this freedom palace.”

That image is emblazoned on an FBI affidavit supporting two charges against Fisher for participating in the riot.

Using the pseudonym “Brad Holiday,” Fisher’s website shared by authorities is awash with the type of extremist hatred and conspiracy theories common among the Capitol rioters on Jan. 6. The website shows posting a Honk Honk cartoon, an antisemitic variation of Pepe the Frog in a clown wig. The Anti-Defamation League considers it a symbol of hate, and Fisher’s website also has a bigoted post titled: “The Connection Between Khazar Occultist Judaism and Communism (Very Disturbing).”

In a nod to QAnon ravings, Fisher depicted President Joe Biden and his family as “Degenerate Criminal Pedophiles,” and he claimed that the government was hiding the truth about hydroxychloroquine, which Trump falsely peddled as a cure-all for COVID-19.

Two of the Facebook accounts examined by authorities were “Holiday Joseph Bradly” and “LuxLife Dating Coach.”

Fisher’s federal defender Tamara Giwa argued that her client should not be kept in jail for his opinions.

“Mr. Fisher’s political beliefs are not a crime,” Giwa said, a line rebuked by the prosecutor.

“That may not be true considering that he is encouraging others to commit violent acts,” Schier said, rattling off a number of calls for violence in his blog posts.

“Gotta make a stand man,” Fisher allegedly wrote on the day of the riot. “Not gonna be intimidated.”

Asked whether Washington, D.C. was an open carry jurisdiction, Fisher replied: “No[…] Not at all,” according to court papers.

Fisher allegedly brought those guns to the city anyway, but he is not accused of bringing them to the Capitol.

The day before the invasion of the Capitol, Fisher posted a lengthy rant claiming that even the most radical Republicans who supported Trump’s lie of a stolen election could not be trusted.

“Ted Cruz, Dan Crenshaw, all of these supposed hardcore constitutionalist republicans… all are compromised,” Fisher wrote, referring to the hard-right Texas politicians. “They will allow the steal to go on.”

Fisher then shared his fever dream of three possible outcomes of the siege.

Fisher claimed: “Each of these, I believe are equally likely.”

Though only currently charged with misdemeanors, Schier indicated that those were filed because prosecutors felt the need to act immediately. He added that felony counts may be coming “in the near future.”

On Wednesday, Biden’s inauguration as the 46th President of the United States occurred with out a hitch with a plea to end an “uncivil war,” combat the forces of division, and end the disinformation that sparked the violence at the Capitol.

“So now, on this hallowed ground where just days ago violence sought to shake this Capitol’s very foundation, we come together as one nation, under God, indivisible, to carry out the peaceful transfer of power as we have for more than two centuries,” Biden declared in front of the building where rioters had hoped to prevent his address from taking place.

(Image courtesy of the Department of Justice)