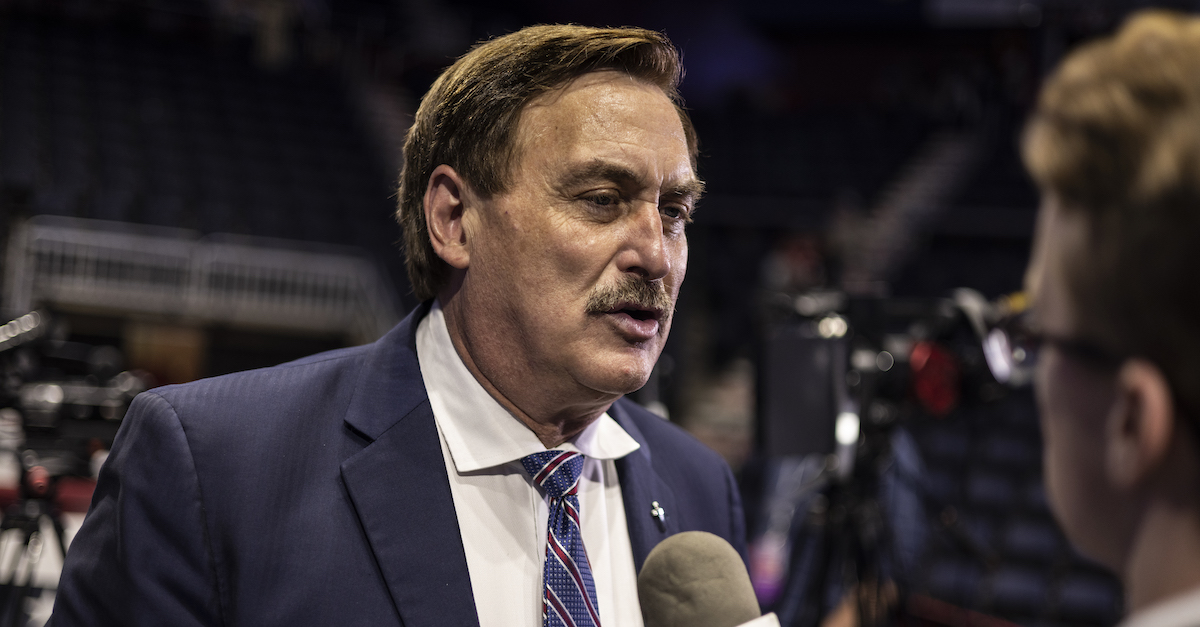 Mike Lindell was photographed prior to a Donald Trump rally on May 28, 2022 in Casper, Wyoming. (Photo by Chet Strange/Getty Images.)

Federal prosecutors on Friday twice reiterated that they were “not conceding” that MyPillow founder and Donald Trump supporter Mike Lindell filed a “true and correct” copy of a purported search warrant served upon him for the seizure of his cell phone.

Those comments came during a less than 20-minute-long status conference in Lindell’s civil lawsuit against the government regarding the seizure of Lindell’s phone in a Hardee’s restaurant drive-thru in Mankato, Minnesota on Sept. 13.  A copy of the warrant filed by Lindell’s attorneys — assuming it is authentic — suggests that the government was investigating possible identity theft and computer crimes connected to various efforts to investigate the outcome of the 2020 presidential election.

Lindell’s 20-page complaint, filed in U.S. District Court for the District of Minnesota, seeks the return of the company-issued phone and other “declaratory or equitable relief.” The complaint also (more relevantly) asks for a judge to declare as “invalid” the search warrant federal agents used to seize the device. It further seeks the return of any data accessed from the device; for a “temporary restraining order prohibiting the Defendants from attempting any access to the data collected”; and for the government to provide Lindell “a copy of the Affidavit submitted to the Court to obtain the Warrant.”

Washington, D.C.-based government attorney Jonathan E. Jacobson said during Friday’s conference with U.S. District Judge Eric C. Tostrud, a Trump appointee who is hearing the matter, that the U.S. Department of Justice would oppose Lindell’s requests to obtain the aforementioned warrant affidavit. Warrant affidavits are detailed documents that lay out the probable cause rationale behind a search, seizure, or arrest.

Lindell’s attorneys asserted during Friday’s call that it would be “appropriate for the plaintiffs to receive a copy in advance of the Oct. 19 hearing” that will argue Lindell’s requests for a temporary restraining order against the government and for the return of the device.

“We have every right to get that information in discovery,” Lindell attorney Andrew Parker said. He called the affidavit a “central piece” of the plaintiff’s challenge to the warrant.

Judge Tostrud said he would welcome motions on the issue.

The overarching reason why Tostrud called the telephonic gathering of counsel surrounded two Sept. 21 filings by Lindell’s attorneys.  Those filings purported to contain copies of the search warrant (but not the affidavit) executed against Lindell viz. the phone.

The “warrant that is the subject of the case has been filed by the plaintiffs in two places in the docket,” Tostrud explained. The first of those two filings, the judge noted, “was originally filed unsealed and unredacted” even though it contained part of Lindell’s social security number and the full number of the cell phone in question.

The second of the two purported copies of the warrant was redacted but was also unsealed, the judge noted.

The judge then feared that the first, unredacted version of the document was already “out there in the public domain.”

Parker, Lindell’s lead attorney, said he believed the redacted version of the document “can be unsealed.”

“We are fine with the status of that document,” he reiterated.

Jacobson, of the DOJ’s Public Integrity Section, said the government would “oppose unsealing the search warrant in the actual search warrant docket.”

The two matters are separate: the warrant itself was filed by the Department of Justice under one magistrate docket; Lindell’s case is separate under another district court docket.

Jacobson then interjected that Lindell’s filing merely purports to be the warrant — or at least part of it.

“We do not oppose Mr. Parker’s request to have the [redacted] document [filed by Lindell] unsealed,” Jacobson continued. “I just want to be clear that the government is not conceding that that is a true and authentic copy of the warrant that was served on Lindell.”

He reiterated that the government’s position is that “any actual warrant” in the original magistrate docket “should remain under seal.”

The judge said an unnamed media organization had suggested that it would intervene in an attempt to get access to what apparently is the original warrant docket.

Later, one of the parties on the call vouchsafed that the media entity in question was believed to be the Minnesota Reformer, an online nonprofit news organization, and that author Tony Webster had filed a motion to intervene in the search warrant docket.

That matter, it was said, was calendared on the magistrate docket for Oct. 8.

Given Parker’s request on Lindell’s behalf for the warrant affidavit, the parties seemed to concur that the matters might more efficiently be addressed in tandem rather than separately.

Jacobson suggested a recalcitrance to add more work to Tostrud’s docket but seemed to agree that a concomitant review of the requests to release the warrant and the affidavit might be wise.

Tostrud said he believed it wise to at least check the magistrate docket and suggested he would at least take that step.

“I’m not the least bit bothered by the suggestion that we add something” to the docket, the judge said amid chuckles about the incessant parade of parties seeking redress before the judiciary.

Attorneys Ana Voss and Craig Baune are also on the case for the government.  Attorneys Patrick M. McSweeney and Alan Dershowitz have joined Parker on Lindell’s team.