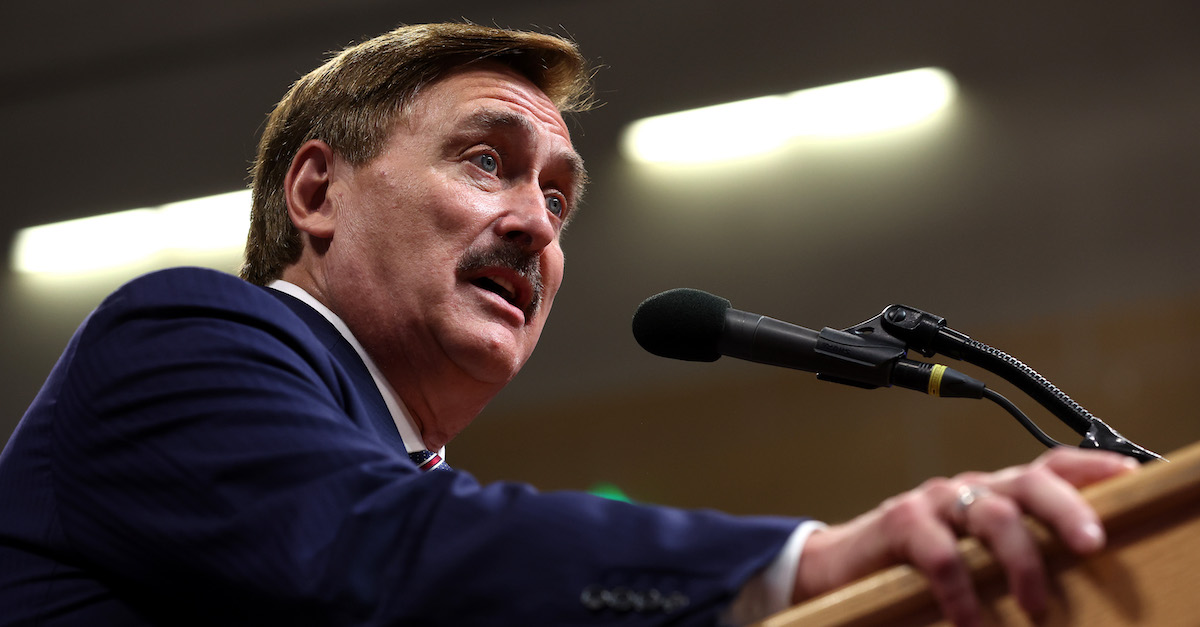 A search warrant for a company-issued cell phone used personally by Mike Lindell says the U.S. Department of Justice wanted to search the MyPillow CEO’s mobile device for information involving possible identity theft and computer crimes. Lindell and a collection of others who have espoused various conspiracy theories involving the 2020 election are listed in the document as “subjects” of a federal probe into those possible offenses.

A copy of the warrant was filed around midday on Wednesday by Lindell’s attorneys as an attachment to a lawsuit filed the night before in U.S. District Court for the District of Minnesota. The attachment was curiously not submitted contemporaneously with the original filing.

After citing Lindell’s phone number, the warrant — as filed by Lindell’s own counsel —  gave the FBI permission to seize the following:

All records and information on the LINDELL CELLPHONE that constitute fruits, evidence, or instrumentalities of violations of 18 U.S.C. §§ 1028(a)(7) (identity theft), 1030(a)(5)(A) (intentional damage to a protected computer), and/or 371 (conspiracy to commit identity theft and/or to cause intentional damage to a protected computer) — (the “SUBJECT OFFENSES”) — those violations involving Tina Peters, Conan James Hayes, Belinda Knisley, Sandra Brown, Sherronna Bishop, Michael Lindell, and/or Douglas Frank, among other co-conspirators known and unknown to the government (the “SUBJECTS”), since November 1, 2020[.]

All of the named individuals have in various forms and venues complained about or denied the outcome of the 2020 election. Peters, Knisley, and Brown are already tied up in election-related cases in Colorado. Bishop is reportedly U.S. Rep. Lauren Boebert’s (R-Colo. 3) former campaign manager. Frank is reportedly Lindell associate. Hayes is reportedly a surfer who developed a line of athletic clothing — a business he subsequently sold — and who claims the election that installed Joe Biden was botched.

The warrant contains a 24-point list of data the FBI was authorized by U.S. Magistrate Judge Tony N. Leung to seize. Leung was appointed by the district court in 2011.

The first item on the list is this: “[a]ll records and information relating to damage to any Dominion computerized voting system, including any impairment to, or attempt to impair, the integrity or availability of data, a program, a system, or information.”

The feds were also seeking information “relating to the attachment of any peripheral to any Dominion computerized voting system, including any USB flash storage drive or other external media storage.”

The FBI also wanted to see if Lindell’s phone contained evidence that “any software, program, application, or code” was “used to obtain information about the configuration, security features, contents, or vulnerabilities of any Dominion computerized voting system.”

As to Hayes specifically, the warrant says the feds were looking for information “relating to Conan James Hayes’ use of another person’s name, photograph, credentials, or other identifying information or documents.”

Further sought were “records and information” that could lead agents to the “geographical location” of any subject of the probe, information about any subject’s “state of mind,” and data about whether a subject attempted to “conceal . . . involvement” with the cited offenses.

The warrant says FBI agents were authorized to use Lindell’s fingerprints to access his phone and to hold the phone in front of Lindell’s face to activate facial recognition technology, if necessary.

A “subject” of an investigation is described by the DOJ’s Justice Manual as someone “whose conduct is within the scope of the grand jury’s investigation.”

The label does not carry the same degree of possible legal jeopardy as that faced by a “target” of an investigation, but it does carry an additional degree of potential jeopardy beyond that of a mere witness in a grand jury proceeding.

According to the Justice Manual, a “target” is “a person as to whom the prosecutor or the grand jury has substantial evidence linking him or her to the commission of a crime and who, in the judgment of the prosecutor, is a putative defendant.”

The warrant for Lindell’s phone does not name any potential “target.”

The warrant also does not directly indicate whether or not a grand jury has been empaneled or contemplated.

Lindell is suing to recover his phone and to restrain federal agents from searching it. He’s also asking a judge to ban the government from using information he allegedly vouchsafed to FBI agents outside a Hardee’s fast food restaurant where the warrant was executed and where the phone was seized. He’s further asking the court to force the DOJ to provide a copy of the affidavit which led to the issuance of the warrant. The affidavit has not yet been made public.

Lindell is alleging that the seizure of the phone violated his First, Fourth, and Fifth Amendment rights.

Lindell’s filing indicates that he initially refused to hand his phone over because he uses it to operate “five businesses.” His lawsuit also suggests the following version of events regarding the three federal criminal statutes cited in the warrant:

Upon information and belief, those alleged violations arise out of circumstances in Mesa County, Colorado where a duly elected Elections Clerk, Tina Peters, ordered forensic images of the Dominion Voting Systems, Inc. (“Dominion”) election management system (“EMS”) server prior to and after Dominion installed a Trusted Build software update on the EMS. Credentialed cyber experts concluded in published reports that they had analyzed the Mesa County EMS and found, inter alia, violations of state and federal record retention laws — and ballot record manipulation — in the elections held in Mesa County in November 2020 and April 2021; that the Mesa County EMS server had unauthorized software installed by Dominion, Microsoft SQL Server Management Studio 17, that allows calculated vote totals to be easily changed; that log files in the EMS showed the unauthorized creation of a second set of ballot databases and the manipulation of ballot record data; and that Dominion’s state-wide software update performed in May 2021, as ordered by the Colorado Secretary of State, overwrote the entire EMS operating system, and thereby violated state and federal election record retention laws. This software update destroyed, inter alia, the computer system log files showing the auditable election record of activity in the EMS. Upon information and belief, had Clerk Peters not ordered a forensic image be taken of the EMS prior to this software update, the above-mentioned violations would not have been discovered.

“The Warrant was obtained by the Government in bad faith,” Lindell’s attorneys wrote. “In applying for the issuance of the Warrant, the [Justice] Department failed to apprise Magistrate Judge Leung of Mr. Lindell’s role in attempting to uncover violations of federal and Colorado election record retention statutes and the fact that he communicated with his lawyers about these matters. It also failed to appraise the Magistrate Judge of the subpoena it intended to serve on Plaintiffs.”

Lindell’s immediate challenge to the warrant is off to a somewhat rocky start. According to the court docket, not all of Lindell’s attorneys are members of the court’s bar. A notice regarding non-admitted attorneys states as follows:

We have received documents listing Kurt Olsen, Patrick M. McSweeney, Alan Dershowitz as counsel of record. If he or she wishes to be listed as an attorney of record in this case, he or she must be admitted to the bar of the U.S. District Court of Minnesota in accordance with Local Rule 83.5 (a), (b) and (c) or temporarily admitted pro hac vice in accordance with Local Rule 83.5 (d) or (e).

Minneapolis attorney Andrew D. Parker is the lead counsel on the case, according to the original filing; he is a member of the Minnesota bar.  The original filing says Olsen, McSweeney, and Dershowitz would be moving for admission pro hac vice — for this case only — in the relevant federal district.

Magistrate Judge Leung was initially selected to hear Lindell’s challenge to the warrant Leung himself agreed to issue. However, on Wednesday afternoon, Leung recused himself from the matter citing 28 U.S.C. § 455(a), a generic disqualification statute which involves any situation “in which his impartiality might reasonably be questioned.” (Another section of the law, § (b), applies to “personal bias or prejudice concerning a party,” and Judge Leung did not cite that section.) Magistrate Judge Elizabeth Cowan Wright will now hear the matter. Wright, a former intellectual property attorney, was selected to become a federal magistrate judge in September 2018 during Donald Trump’s presidency.

U.S. District Judge Eric C. Tostrud, a Trump appointee, is assigned to the Lindell case; he initially referred it to Magistrate Judge Leung.

The full warrant is attached below: