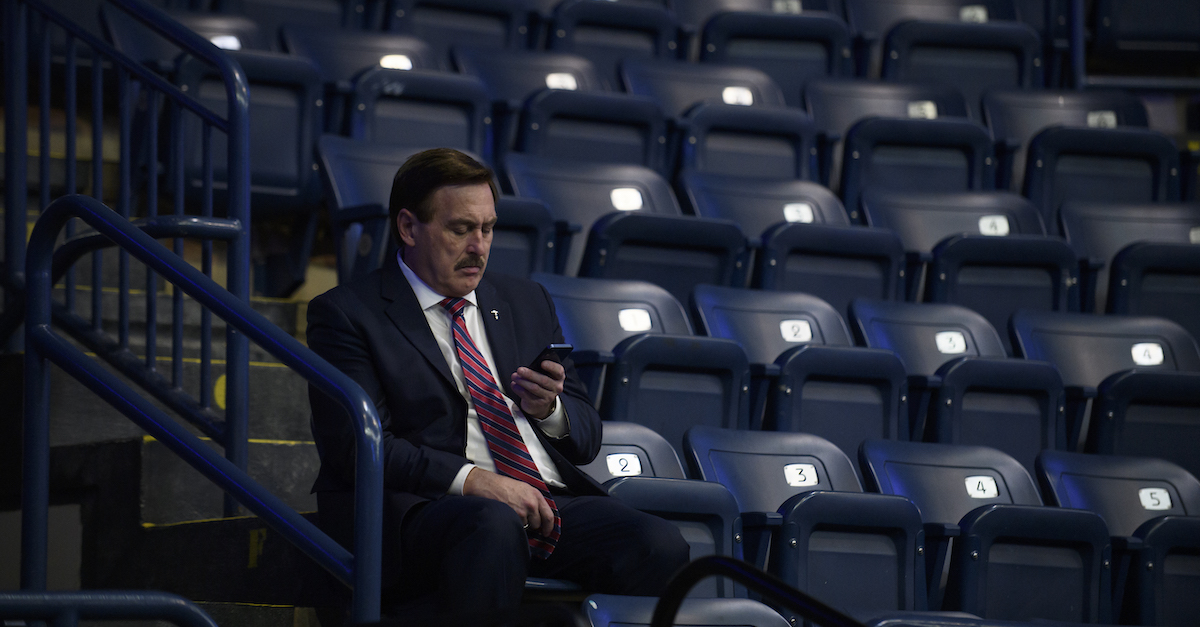 MyPillow CEO Mike Lindell checks his cellphone inside the Covelli Centre before a Save America Rally, featuring former President Donald Trump, to support Republican candidates running for state and federal offices on September 17, 2022 in Youngstown, Ohio.

Five days after issuing a threat to do so on convicted former White House strategist Steve Bannon’s podcast, MyPillow CEO Mike Lindell made good on a promise to sue the U.S. Government and Attorney General Merrick Garland over the seizure of his company-issued cell phone.

A 20-page complaint filed in U.S. District Court for the District of Minnesota seeks the return of Lindell’s phone and other “declaratory or equitable relief.” The complaint also (more relevantly) asks for a judge to declare as “invalid” the search warrant federal agents used to seize Lindell’s company-issued phone. It further seeks the return of the phone and any data accessed from the device; for a “temporary restraining order prohibiting the Defendants from attempting any access to the data collected”; and that the government provide Lindell “a copy of the Affidavit submitted to the Court to obtain the Warrant.”

The lawsuit says that Magistrate Judge Tony N. Leung issued a search warrant on Sept. 7, 2022, for the phone in question. As Lindell was returning from a “duck hunting” trip to Iowa with a friend on Sept. 13, 2022, he says he was stopped at a Hardee’s restaurant in Mankato, Minnesota. There, he says, a federal agent in an unmarked vehicle and dressed in street clothes blocked his ability to exit from the establishment’s drive-thru lane.

The complaint explains the scene in a tone that could be set to narration using the theme song of a popular police reality show:

As Mr. Lindell was going to drive away from the drive-through window, an unmarked vehicle operated by a federal agent in street clothes abruptly moved in front of Mr. Lindell’s truck quickly blocking any forward movement.

Immediately after the first vehicle operated by a federal agent appeared, a second unmarked vehicle pulled to the right of Mr. Lindell’s truck and prevented him from driving around the first vehicle that was blocking his way.

At about the same time, a third unmarked vehicle operated by a federal agent in street clothes pulled in directly behind Mr. Lindell’s truck, making it impossible for him to back up in the drive-through lane.

Not knowing that the individuals in the three vehicles were federal agents, and fearing for his and his friend’s lives, Mr. Lindell was prepared to ram one of the vehicles to escape. Before taking any such action he demanded, in a loud voice to attract attention, to know “Who are you people? What do you want?”

The agents then allegedly identified themselves as FBI agents and displayed the usual identification.

Lindell claims the agents grilled him about myriad topics for roughly half an hour while he was “not free to leave the drive-through lane.” It is unclear whether he could have left in some other capacity. Lindell’s lawsuit says he was neither read his Miranda rights nor allowed for some time to call his lawyer. The alleged topics of discussion included “Dominion Voting Systems, Tina Peters, Colorado incidents, Doug Frank, information posted on Plaintiff’s media platform, FrankSpeech.com, Dominion’s Trusted Build software update that destroyed election records, his travel on his airplane throughout the Country and to Colorado, and other matters,” the lawsuit says.

The lawsuit suggests that Lindell was being targeted because of information he claims to have uncovered about the veracity of the 2020 election.

The first count alleges a violation of the First Amendment; Lindell claims that a search warrant for his phone violated his freedoms of association, speech, press, and his right to petition the government.

The second count claims the government may have used cell tower information to surveil Lindell:

The issuance of the Warrant violated the warrant provision of the Fourth Amendment, which requires that a warrant first be issued to justify the surveillance of Mr. Lindell either by using cell site location information (“CSLI”) or a tracking device attached to his vehicle.

In all likelihood, the Government employed either CSLI or a tracking device attached to Mr. Lindell’s vehicle to monitor his whereabouts. The Government should be required to disclose this to the Court and Mr. Lindell.

The Government to Plaintiffs’ knowledge did not obtain a warrant prior to its surveillance of Mr. Lindell.

The third count alleged other Fourth Amendment violations (regarding an alleged “unreasonable search and seizure” using an overbroad warrant).

A fourth count alleges the unlawful seizure of the plaintiff himself under the Fourth Amendment because law enforcement agents allegedly operated “three vehicles in a manner that blocked Mr. Lindell from leaving the fast-food restaurant’s drive-through lane on September 13, 2022, intended to, and did in fact, restrain Mr. Lindell’s freedom to exit.”

Mr. Lindell submitted against his will to the show of force by the agents and made no attempt to escape their blockade.

The agents were not executing a warrant that authorized them to seize Mr. Lindell because none had been requested or obtained for that action.

While he was in their custody, the agents asked Mr. Lindell targeted questions with a purpose to elicit incriminating information. At no point did they read Mr. Lindell his Miranda rights.

During Mr. Lindell’s detention, the agents initially refused his request to telephone his lawyer while demanding that he surrender his cell phone to the agents.

After a telephone conversation with his lawyer, Mr. Lindell handed his cell phone to the agents.

The actions of the agents in detaining Mr. Lindell were unnecessary and unreasonable and an effort to surreptitiously obtain incriminating information under the guise of seizing a cell phone.

Lindell’s lawyers Andrew D. Parker of Minneapolis, Kurt Olsen of Washington, D.C., and Patrick M. McSweeney of Powhatan, Virginia, were joined by Harvard Law School Professor Emeritus Alan Dershowitz on the filing. Dershowitz did not respond to a Law&Crime request for comment on the case when Law&Crime inquired about it on Sept. 15.