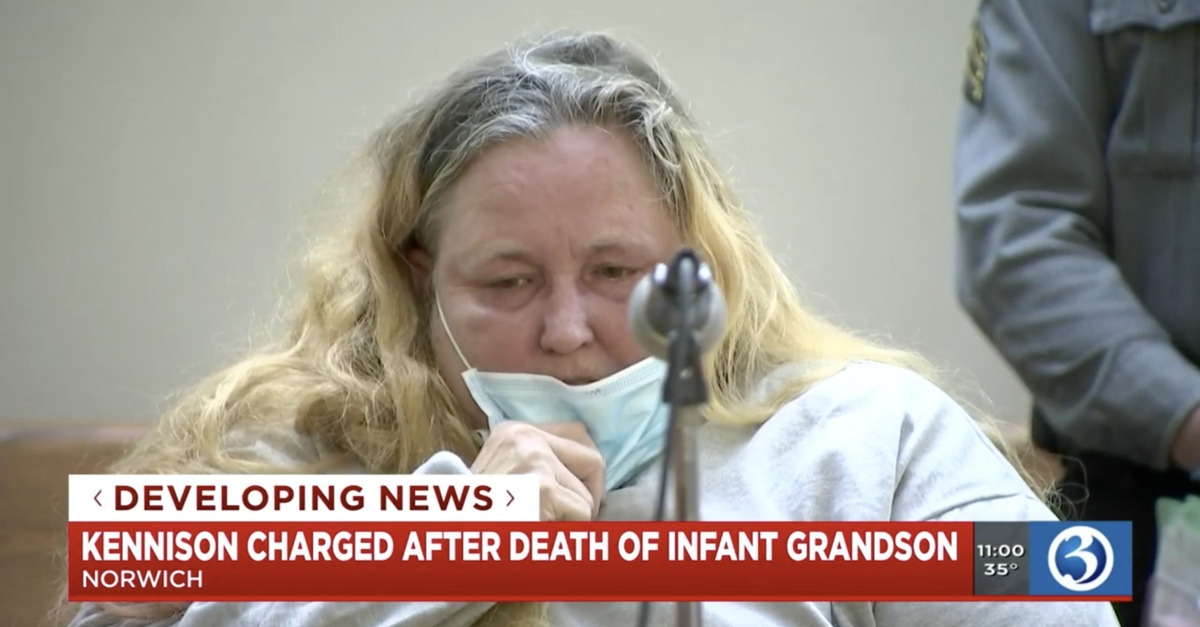 A Connecticut grandmother charged in connection with the death of her 6-week-old infant grandson earlier this month collapsed just after her first court appearance over the long holiday weekend.

The boy, however, didn’t die immediately. He suffered for several days.

The baby allegedly arrived in “cardiac arrest” and lacking a heartbeat when taken to a local hospital, a police affidavit alleges.

No signs of abuse were present on the child and medical examiners said there had been attempts to resuscitate the boy but that he wasn’t breathing when he arrived at the William W. Backus Hospital in Norwich, Conn. He was eventually airlifted to the Connecticut Children’s Medical Center in Hartord. He arrived on Nov. 18 but after days of life-saving efforts, was pronounced dead on Nov. 21.

Recently-reported court documents suggest that Kennison knew the baby was not “alive,” citing his cold body temperature and the fact that his body appeared to be “lifeless and limp.” When asked to clarify what she meant by that phrase, she allegedly said the boy was “limp, not breathing, and not crying” but making “moaning sounds” as if he were struggling to breathe. After that, however, she admittedly didn’t check to make sure the boy was still alive, police claim.

“I thought if there was something wrong with (the victim), that everyone would blame me for it because I dozed off shortly after (Czyzewski) left the apartment,” Kennison allegedly told detectives when asked about the boy’s death.

According to local CBS affiliate WFSB, the deceased’s grandmother was rolled out on a stretcher from a Norwich court for an unidentified “medical emergency” immediately after her arraignment last Friday–during which she was repeatedly seen coughing and wheezing. She reportedly has asthma and thyroid cancer. The defendant is currently being detained on $250,000 bond.

Law&Crime previously reported on court documents in the daughter’s criminal case–many of which are substantially similar.

A police affidavit in the Kennison case reveals a shocking timeline of alleged hours’ worth of indifference to the dying child:

The mother allegedly told police she believed that white substance was formula, which she tried to clean from her child’s nose before noticing one solitary breath and then a lack of breathing altogether. After that, she said her mother dialed 911. The mother said she performed CPR on her boy until first responders arrived.

By then, it was too late.