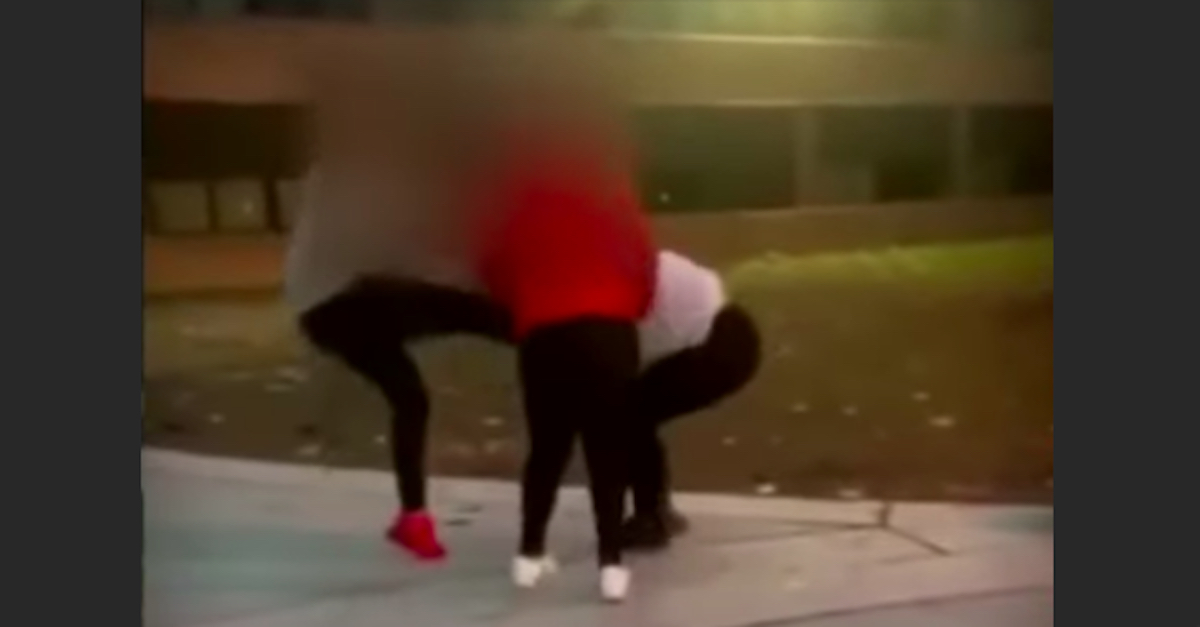 Police are searching for the Mighigan woman accused of beating a middle school student.

Police in Michigan are searching for a woman involved in a fight between two middle school girls, violently punching and kicking one of the children multiple times before fleeing the scene, FOX affiliate KTVI reported. According to the report, authorities said the woman is likely to face felony assault charges.

Video of the brutal assault, which took place last week at Roseville Middle School, went viral on social media. Police said the videos shows a woman in her thirties overwhelming one of the much younger students involved in the initial scuffle in a quick attack.

After a few seconds, a woman in a gray hoodie enters the frame and starts wildly throwing punches at the student in the white shirt. After sustaining multiple blows to the head and body, the student in white hunches over at the waist with her head and chest facing the ground. The adult then appeared to grab the hunched over student by the hair, set her feet, and unleashed two consecutive brutal kicks to the child’s face. The child in white then crumples to the ground and the adult and the student in red walk away.

“Very hard to watch. as a parent, it was hard to watch,” Roseville Deputy Police Chief Mitch Berlin told KTVI.

Berlin said the fight happened at approximately 7 a.m., shortly before classes at the middle school began. A bystander who witnessed the incident reportedly called 911. Officers with the Roseville Police Department responded to the scene and aided the student who was assaulted.

The student in red and the adult both reportedly left the school immediately after the incident. Chief Berlin said the best thing the woman involved in the fight can do is turn herself in to authorities.

“Our detective bureau is working on it diligently and should have charges coming forth relatively soon,” Berlin said. “And just hope that person decides to turn themselves in and expedite the process.”

Several parents whose children go to Roseville Middle School spoke with KTVI and said they were disturbed by the footage and the fact that the school never notified them about the incident.

Another parent, Jamon Benson, told the station it was “definitely alarming” that parents weren’t told about an adult assaulting a student on school grounds.

Roseville Community Schools did not respond to messages from KTVI but police said the school is cooperating with the investigation. Police officers will also be posted at the school every morning to prevent a similar situation from happening in the future.

See the report below for video of the fight.