The COVID-19 Pandemic Is Not Over, But the Texas Governor Ended Mask Mandates: ‘It Is Now Time to Open Texas 100%’ 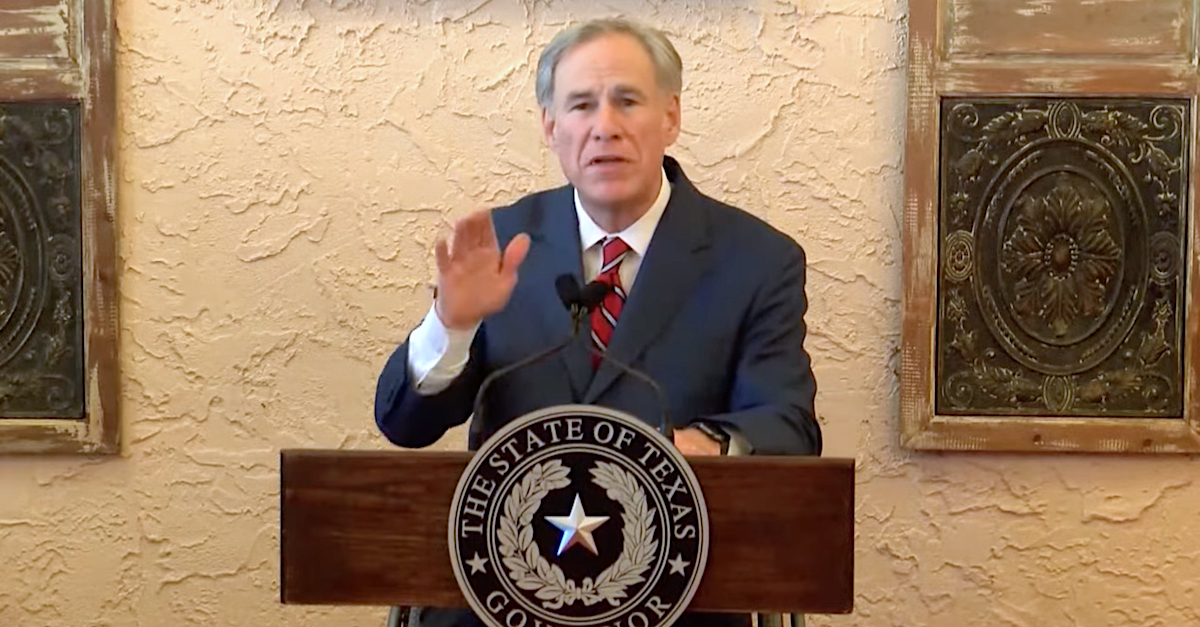 Texas Gov. Greg Abbott (R) on Tuesday announced imminent plans to rescind executive-order-imposed mask mandates and to allow businesses to open to full capacity after nearly a year of lockdowns related to the COVID-19 pandemic. While arguing for a return to normalcy, however, Abbott implored citizens to continue to protect themselves against COVID-19.

The governor’s speech vacillated somewhere between a rebuke against government regulation, a congratulatory session for the state’s robust economy, and a prayer and plea for state residents to continue to use many of the same COVID-19 protective measures Abbott deemed no longer necessary as a matter of law.

“Texas is doing more than ever to save lives and to reduce the spread of COVID. We must now do more to restore livelihood and normalcy in the lives of Texans,” Abbott said. “Today’s announcement does not abandon the safe practices that Texans have mastered over the past year.  Instead, it’s a reminder that each person has their own role to play in their own personal safety as well as in the safety of others. It’s a reminder that individual safety is managed every day as matter of personal responsibility rather than by government mandate. Individual responsibility is a corollary to individual freedom. We can have both.”

“Effective next Wednesday, all businesses of any type are allowed to open 100%,” he said. “That includes any type of entity in Texas. Also, I am ending the statewide mask mandate.”

Abbott said he rolled back the restrictions because Texans were actively protecting themselves from the sometimes-deadly contagion on their own.

“Last March, most Texas had no clue about the precautions needed to avoid COVID,” the governor said. “Now, Texans have mastered the daily habits to avoid getting COVID.”

The state’s vaccination numbers are on the uptick but are nowhere close to complete. The Texas Tribune reported Monday that the state had received “3 million vaccine doses thus far for its 29 million residents.” According to online data reviewed by Law&Crime, slightly more than 7-percent of Texas residents are fully vaccinated.

Still, “state mandates are no longer needed,” Abbott said — with yet another caveat. “Despite these changes, remember this: removing state mandates does not end personal responsibility or the importance of caring for your family members and caring for your friends and caring for others in your community. Personal vigilance — to follow the same standards — is still needed to contain COVID. It’s just that now, state mandates are no longer needed. To stay safe, Texans should continue following medical advice on preventing COVID, just as they do on other medical issues.”

“For nearly a half a year, most businesses have been open at either 75% or 50%, and during that time, too many Texans have been sidelined from employment opportunities,” Abbott said. “Too many business owners have struggled to pay their bills. This must end. It is now time to open Texas 100%.”

But, he said, businesses could continue to limit capacity on their own volition.

“Every business that wants to be open should be open,” he added. “Now is the right time to do this. Texas is far better positioned now than when I issued my last executive order back in October, and we are in a completely different position than when I issued my first executive order last March. Back then, hardly any Texan knew what PPE was. Now, we have — now, we have an abundance of it. Early on, there were no COVID tests. Now we have the ability to do over 100,000 COVID tests per day. When COVID first ravished our communities, there were no medicines to treat it, but now we have antibody therapeutic drugs to treat COVID and keep people out of hospitals.”

Abbott also pointed to vaccines. By the end of this month, he said vaccines will have been made available to every senior in the state.

The governor also said local officials could issue clampdowns in the future if infection flare-ups begin to occur in their communities. He said such measures could kick in if hospitalizations “rise above 15% of the hospital bed capacity in that region for seven straight days.”

“However, under no circumstance can a county judge put anybody in jail for not following COVID orders, and no banalities get imposed for failing to wear a face mask,” Abbott said.

Abbott made the announcement at a Lubbock restaurant which he said “typified the entrepreneurial spirit that does make Texas so special.”

He also called Texas the “economic engine of the United States of America.”

Not everyone in Texas reacted favorably to the announcement.

The top government executive in Harris County, the Lone Star State’s largest county, said Abbott’s move was a political ploy to divert attention away from other issues recently plaguing the state.

“Taking away critical public health interventions that we know are working won’t make our community safer, nor will it hasten our return to normalcy,” a spokesperson for Linda Hidalgo tweeted. “Quite the opposite, every time public health measures have been pulled back, we’ve seen a spike in hospitalizations. If we start the climb now, we’d be starting from the highest starting point ever when it comes to our hospital population, an unacceptable and dangerous proposition. With the arrival of COVID-19 vaccines, we’re inching closer to the finish line of this pandemic – now is not the time to reverse the gains we’ve worked so hard to achieve. At best, today’s decision is wishful thinking. At worst, it is a cynical attempt to distract Texans from the failures of state oversight of our power grid.”

Watch the announcement below via WFAA-TV:

Editor’s note: this piece has been updated to include reaction from Linda Hidalgo.