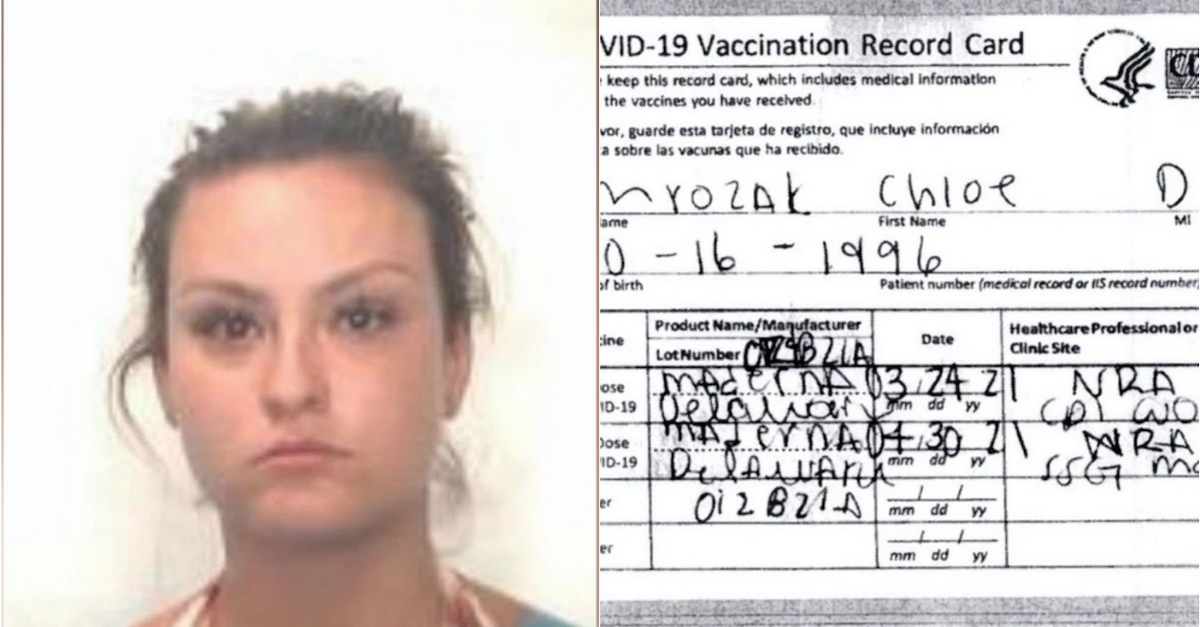 When Hawaiian airport screeners glanced at an Illinois traveler’s vaccination card, they quickly felt it looked “questionable,” and so they forwarded it to an investigating agent.

The agent noticed the problem, too.

“Upon review, I noted that ‘Moderna’ was spelled incorrectly, which was listed as ‘Maderna,'” the agent wrote, in a report establishing probable cause to arrest 24-year-old Chloe Mrozak.

The agent said he found other problems with Mrozak’s paperwork. Her traveler’s records from Aug. 23 this year did not provide a reservation number at her hotel. She also did not provide a flight number for her American Airlines trip, the agent said. Though she was an Illinois resident, Mrozak allegedly claimed to get the shot in Delaware, supposedly administered by National Guard members identified as “cpl wolf” and “ssgt montey.”

Those red flags kicked off a week-long investigation, picking apart all of the discrepancies and leading to Mrozak’s arrest on Monday.

According to court records reviewed by Law&Crime, the Honolulu-based hotel Mrozak marked on her form—Holiday Inn Express Waikiki—reported that she had no such reservation. Special Agent Wilson Lau found her Facebook account describing herself as a “model,” and the photo gallery showed that she had a “distinctive tattoo on her left hip.” Based on that tattoo, agents found her at the Southwest Airline Counter on Aug. 28, when she was preparing to return home, according to court papers.

“Upon confirming Mrozak’s identity via her government issued identification card, I informed her that I conducted an investigation and information obtained from the State of Delaware that her information listed on her CDC Card was false,” Lau’s probable cause statement reads. “I informed her that she was under arrest for Falsified Vaccination Documents, HRS 127-29. Arrest was made without incident.”

Deputy Attorney General Albert Cook charged Mrozak with two violations of that law, one for falsifying the document and another for violating quarantine. The Hawaiian statute, which criminalizes violations of any rule promulgated by the governor or mayor, carries a possible $5,000 penalty and a maximum term of a year imprisonment. That rule here is the state’s Safe Travels program, which Gov. David Ige (D) implemented through an emergency proclamation. Ige mandated that people traveling from the U.S. and U.S. territories must be fully vaccinated or present a negative COVID-19 test to avoid a 10-day quarantine.

According to court records, the court set Mrozak’s bail at $2,000. Her case remains active.

This is not the first Aloha State clampdown on travelers allegedly faking proof of vaccination.

A week before that, a father and son got slapped with similar charges after allegedly tried to travel to Hawaii using fake vaccine cards, also in violation of the state’s Safe Travels program.

Federal authorities are also closing in on the supply side, charging a Chicago pharmacist and a naturopathic doctor from California in the seemingly burgeoning underground economy of the COVID-19 era.

As recently as Tuesday in New York City, the Manhattan DA charged 15 people in connection with unlawful buying and selling of fake vaccine cards.

Read the charges against Mrozak below:

(Images via Hawaii’s Department of Public Health and court records)