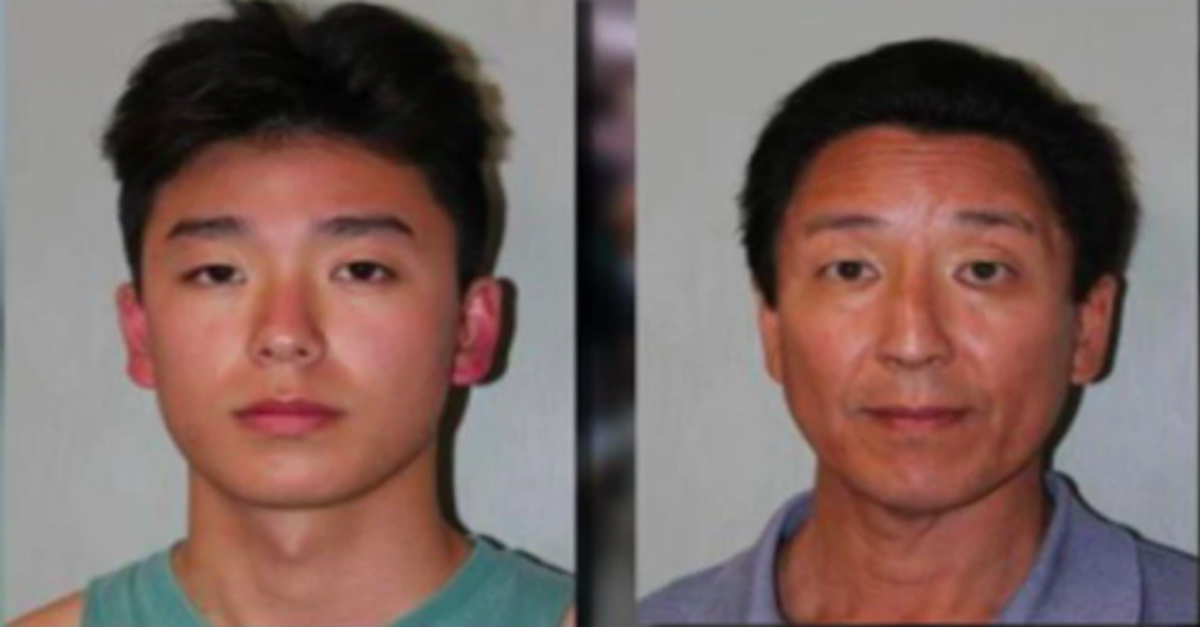 Trevor Chung and Norbert Chung, courtesy of the Hawaii Department of Corrections

A father and son duo preparing to embark on a tropical Hawaiian getaway found themselves behind bars this week after authorities discovered they had tried to get into the isolated island-state using falsified COVID-19 vaccination cards, the state attorney general’s office said.

Norbert Chung, 57, and Trevor Chung, 19, were arrested Sunday at Honolulu’s Daniel K. Inouye Airport after officials allege they tried to circumvent the state’s Safe Travels program using fake documents that said they were vaccinated against the virus.

The Safe Travels program was implemented through emergency proclamation by Gov. David Ige (D). It requires all unvaccinated travelers from the U.S. and its territories to undergo a mandatory 10-day quarantine before they can move about freely within the state. Vaccinated travelers are allowed to bypass the quarantine process altogether.

According to Gary H. Yamashiroya, a spokesperson for the attorney general’s office, the two were arrested after investigators with the AG’s office followed up on a tip received from a “community member” prior to their arrival in Honolulu.

“Attorney General investigators are committed to ensuring all such leads are investigated and thank the community for their assistance and support. Along those lines, the Department of the Attorney General will investigate and prosecute those who cheat the Safe Travels program, which was established to keep our islands safe,” Yamashiroya said in an email to Law&Crime. “They’ve been charged with Violation of the Emergency Proclamation by falsifying a vaccination card which carries a fine of up to $5,000 and/or imprisonment of up to one year.”

The case is the first of its kind to be charged by the Hawaii Department of the Attorney General, Yamashiroya said, though he conceded that other state agencies may also be prosecuting cases for falsification of vaccination cards that he is not aware of (see: here).

“Prior to Sunday, there were many, many hours put into the investigation that culminated on Sunday and where we are even today,” Arthur Logan, a special agent of criminal investigations for the Department of Attorney General said in a statement to local FOX-affiliate news station KHON-TV.

The attorney general’s office said the charges should come as a warning to any prospective travelers who may try to put the state’s health at risk by lying about their vaccination status.

“As reports of falsified card usage increases, as does enforcement,” Yamashiroya said. “Everyone should remember that falsified CDC cards are a federal offense and depending on local laws, a state offense. In Hawaii, using falsified documents for travel is a misdemeanor which carries a fine of up to $5,000 and/or imprisonment of up to one year and we will prosecute these crimes to the fullest extent the law provides.”

The AG’s office declined to provide any personal details about the Chungs other than their names and ages, but Houston-based FOX-affiliate news station KRIV-TV reported that both men are from California. Investigators in their home state are reportedly investigating the source of the alleged falsified vaccine cards.

Gov. Ige on Tuesday addressed the arrests during a press conference, saying the state would continue to be proactive in prosecuting those who refuse to abide by the state’s health requirements.

“We’ve been pretty aggressive in enforcing and prosecuting those violators that we have become aware of,” he said. “We have pursued quarantine violations. We do have a case where we had travelers forging vaccination records that we’ve filed charges against.”

The father and son were formally charged and arraigned on Wednesday morning and were released on $2,000 bond, per KRIV. They are currently scheduled to appear before a judge in Hawaii on September 1.